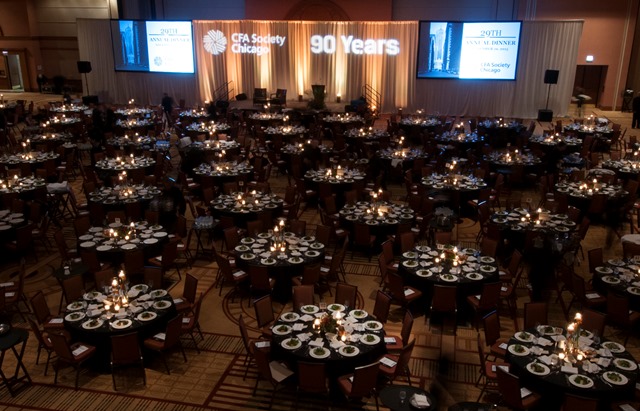 As attendees milled around the large meeting hall of the Streeterville Sheraton, our annual Society dinner began with soft jazz in the background and steak and salmon slowly finding their way to tables. Experienced investment executives and new Charterholders alike shook hands and networked while dining, excited about the prospect of hearing from one of the preeminent minds in the investment world. 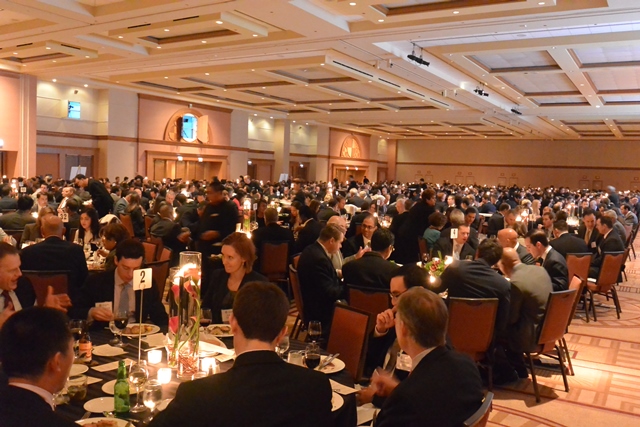 Each attendee also received a book published by the CFA Society Chicago titled “Celebrating 90 Years” to take home with them. The book, which the Society’s Communications Committee spent over a year preparing, shares biographies of our pioneers, financial news articles from years past and photographs of important places and people who helped shape our organization’s history. As Co-Chairman of the CFA Society Chicago Communications Committee, I’d like to extend my gratitude to everyone who worked on the history project and helped make it happen: many thanks to all of you who spent long weekends in various libraries researching and crafting this excellent book.

New Charterholders being recognized at the 29th Annual Dinner

Kerry Jordan, CFA thanked Paul Smith for his remarks and switched gears to honor the four individuals marking their 50th year as Charterholders. The new class of 177 recently-minted Charterholders was also toasted, with Jordan reminding the audience just how difficult it is to pass all three exams and the massive amount of time and effort expended to earn a CFA Charter. Jordan reiterated the benefits and reach of the CFA Charter, stating that there are now local societies in 71 countries, with over 300 universities globally incorporating the CFA curriculum into their programs. 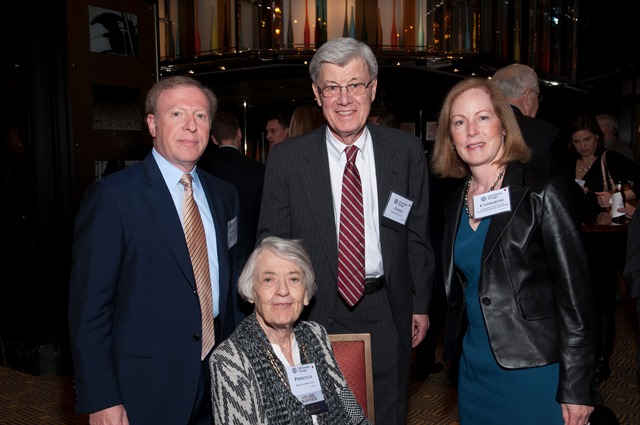 The Hortense Friedman, CFA, Award for Excellence was presented to longtime Harris Bank analyst Priscilla Perry. Perry’s biography mentioned that she needed to pass all 3 exams, not just 2, as some Charterholders were given the CFA designation with only two passing exams earlier in the program. 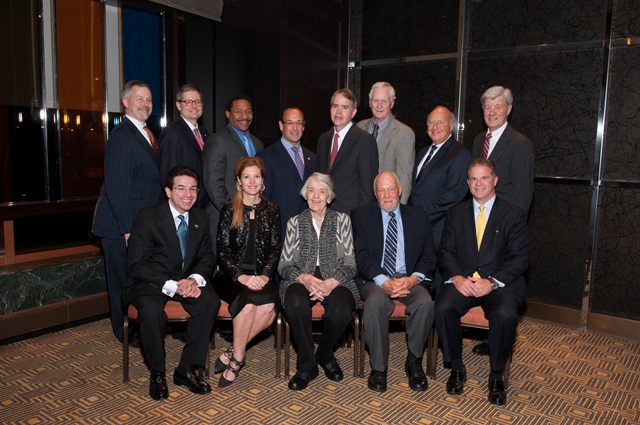 Jordan then discussed her own personal journey towards becoming Chairman of the CFA Society Chicago. She quipped, in reference to former Chair Heather Brilliant, who had been recently promoted to CEO of Australasia at Morningstar, that she liked the trend of recent CFA Chicago Chairs receiving a ‘Chief’ in front of their job title.

“We’re getting to you Mohamed, just a couple more things,” Jordan said to laughs in the audience as she listed off the event sponsors and graciously thanked them for their kind support. 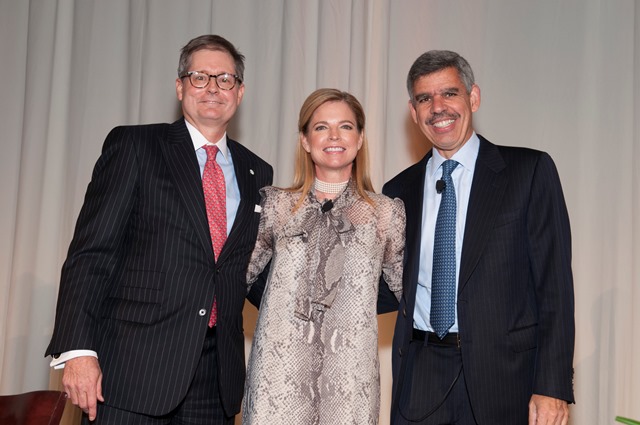 Immediate past Chairman Christopher Vincent, CFA was asked to introduce Mohamed El-Erian. In his introduction, Vincent mentioned the parlor game that he likes to play with other company leaders of “who has the most CFA Charterholders” but that he usually prefers a per capita measurement, which favors William Blair.

Dressed in a dark suit and a blue tie, El-Erian made his way to the stage amidst thunderous applause, pausing to take a few pictures with Christopher Vincent, CFA and Kerry Jordan, CFA.  The format for the presentation was a one-on-one chat, a la a Charlie Rose interview. Questions from CFA Society Chicago members were solicited ahead of time, with Jordan to act as the interviewer while she and El-Erian sat in armchairs on the Sheraton ballroom stage. Jordan mentioned a few of the questions that had been tossed out, including “How crazy is Bill Gross…really?”, to which El-Erian stared straight ahead with the slightest smirk on his face, wisely declining to offer any thoughts around his old boss at PIMCO.

Given El-Erian’s vast array of job, media and government responsibilities, how does he spend a typical day, a CFA charterholder wanted to know?

While at PIMCO, he would rise at 2:45 AM to compensate for the 3 hour time difference between California and New York, but now El-Erian sleeps in…until 3:30. The audience audibly gasped upon hearing this, realizing that building a net worth of $2.3 billion doesn’t always come with a lot of sleep.

After an early wakeup, El-Erian does some of the same things we all do. He looks to find out what is going on in the world, takes his dog out and makes his daughter breakfast. Sometimes when he lies down at 9 pm to sleep (he aims for about 6.5 hours of sleep a night), he starts tossing and turning and obsessing about how many hours of sleep he’ll get if he can’t fall asleep promptly at 9 pm. Then, El-Erian said, he might begin calculating his 3 day sleep moving average and his 5 day sleep moving average, to chuckles in the financially-oriented audience.

El-Erian has been a fan of the Mets since 1968 and said he was a bit worried about presenting in front of a room full of Cubs fans shortly after his team knocked the North Siders off in the NLCS. “Well, about 20% of you are on my side,” he said, referencing the much smaller Chicago White Sox fan base.

“High,” El-Erian responded. “But why are we obsessing with 25 basis points?” 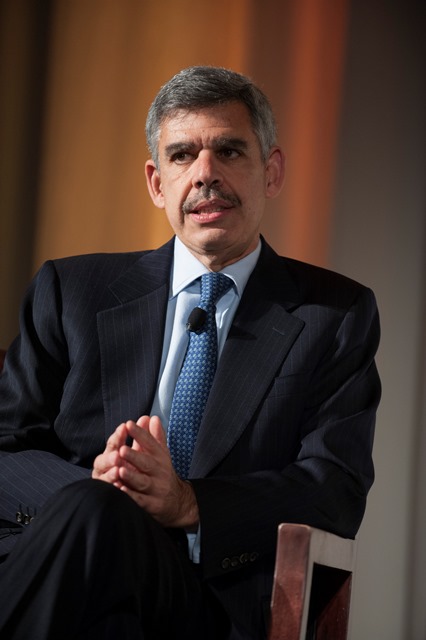 El-Erian had three observations on the current Fed watch:

“The Fed is dying to get off of 0%,” said El-Erian, “and the longer they are unconventional with monetary policy, the lower the benefits and the higher the costs.”

Over the past 10 years, society has bet on a growth model with finance, seeing it as an engine of prosperity for the economy. Countries like Iceland greatly expanded the size of banking within their economies with the belief that you can grow a lot with an expanding financial center. “Finance,” said El-Erian, “just got too big.”

Another observation El-Erian made was that the global political system was not stepping up to its economic governance responsibilities. In his mind we need a political system that steps up and a financial system that serves society as a whole to counter the effects of volatile markets and uncertainty around interest rate increases.

He talked about a recent investment he made in a firm that provides credit for very low income individuals, stating that “credit card debt can ruin you.” Technology is changing everything we do, and behavioral finance is now being used to help improve access to credit. The new generation of millennials expects “interaction anytime, anywhere” and companies need to build their strategy around this fact. In 10 to 15 years, Millennials will comprise the main customer base for most firms. El-Erian mentioned peer-to-peer lending, seen on platforms such as Lending Club, as part of the disruptive force currently taking place within finance, enabling individuals to interact in ways that would previously require an intermediary such as a bank. Technology has given rise to a broader trend of individual empowerment, and firms that ignore this change will find themselves rapidly disrupted. El-Erian used the example of the Hilton hotel chain taking a century to build 700,000 rooms while Airbnb accomplished this in a few years. “Starwood is being disrupted by people who never built a hotel in their life,” he said.

Jordan then turned the conversation towards the topic of student loan debt. Over $1.4 trillion is owed by students and this amount has tripled in just a few years, making many consider the student loan market to be the next subprime-like domino waiting to fall. As El-Erian explained, the return on higher education has gone down as the costs have increased, with an increasing household concentration of educational debt. Some options to fix this situation include broader use of community college, an earlier start for financial literacy programs and increasing the transparency around the student loan market, which El-Erian described as very low. “When you have a debt overhang, it impacts everyone,” El-Erian stated, saying that the options of bailing out delinquent borrowers or having an entire segment of society of being crushed by student loan debt are both highly unpalatable.

In El-Erian’s mind, one of the best ways new charterholders can prepare for a successful career would be by learning the languages of emerging economies, particularly Mandarin and Cantonese. The emergence of a much larger global middle class also points to an increased need for financial advice. Another less positive trend El-Erian highlighted was the “hollowing out” of the middle class in the West, resulting in a barbell-style society of poor and rich with few in the middle.

In terms of the investment landscape, El-Erian said it is no longer about products, it’s about solutions. You can’t expect to lob an array of diverse products at consumers and hope for them to construct a solution, the investment industry needs to build solutions for them.

One attendee wanted to know El-Erian’s views on the topic of active versus passive investment. In El-Erian’s mind, there shouldn’t be a debate because there is room for both approaches. Passive investment can be problematic in some asset classes, which El-Erian detailed in an example from earlier in his career while working as an emerging markets bond portfolio manager. At the time, Argentina represented 20% of an emerging markets index, but PIMCO made the decision that the country wasn’t a good credit risk and decided not to allocate any of its capital to Argentine bonds. Some commentators characterized this decision as irresponsible because it was such a large holding in the index and its exclusion would inject a huge tracking error into the PIMCO emerging market fund. Over time, PIMCO’s decision not to invest in Argentina turned out to be a huge success as the country defaulted in 2001-2002, and the exclusion of its bonds in PIMCO’s fund led to strong benchmark outperformance. For this reason, when default and liquidity risk is high, active management is very important. But in some asset classes, active management doesn’t really add much value, El-Erian opined.

Liquidity drives many investment decisions in fixed income and this risk factor has grown in importance as the buy side has increased market participation as sell side participation has declined, resulting in what El-Erian termed “the delusion of liquidity” currently going on in markets.

El-Erian listed three items he would expect economists to name as top initiatives needed to drive economic growth, including structural reform, the fundamental imbalance between the will to spend and the size of the wallet (“Germany has the wallet but not the will, Greece has the will but not the wallet”), and reducing what he sees as excessive levels of debt in the financial system. Publicly-traded markets are especially prone to manipulation by Fed policy, and El-Erian continues to move assets from public markets to cash and private markets as new index highs are reached.

Lastly, Jordan asked El-Erian about what he thinks of the future of finance. El-Erian laughed and said “They always say be afraid of the last question”, stating that he had recently created a Twitter account and was amazed by that platform, and that the future is generally very hard to predict. 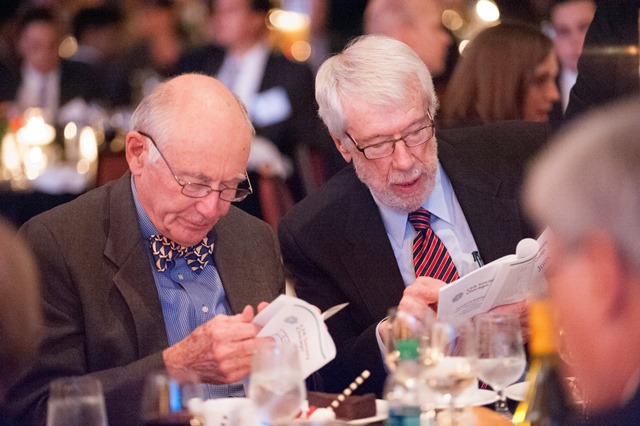 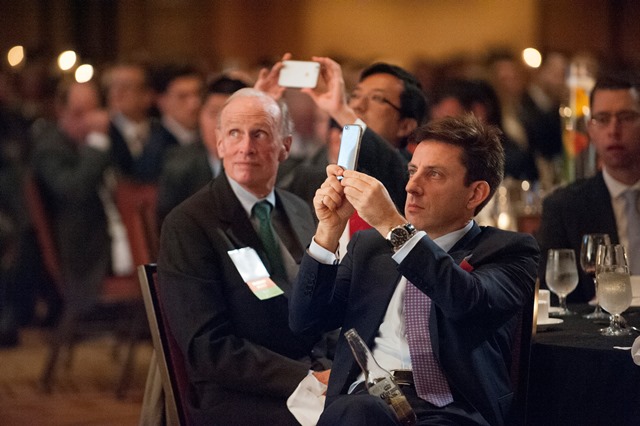 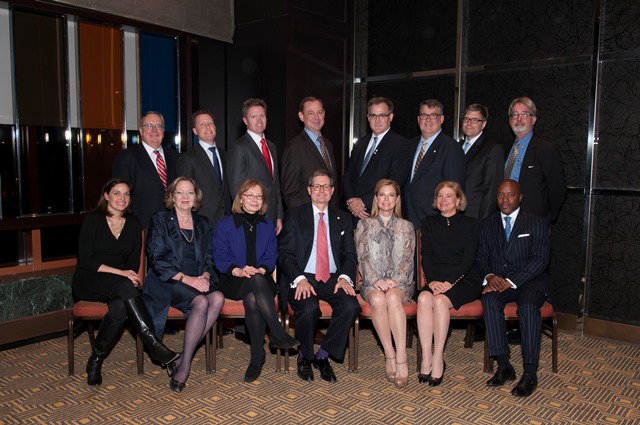 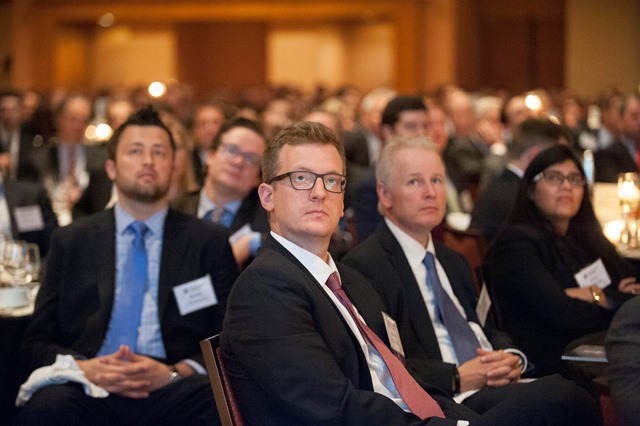 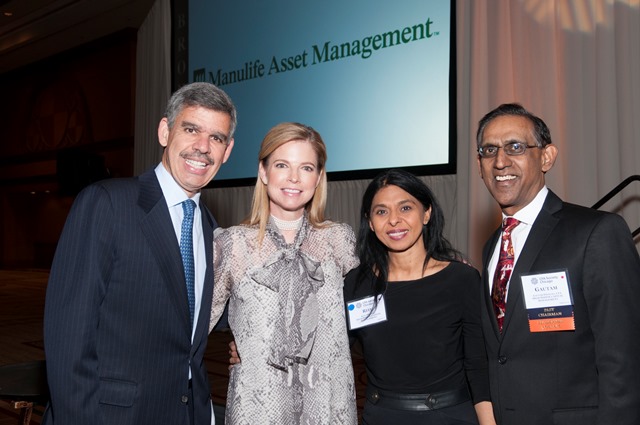 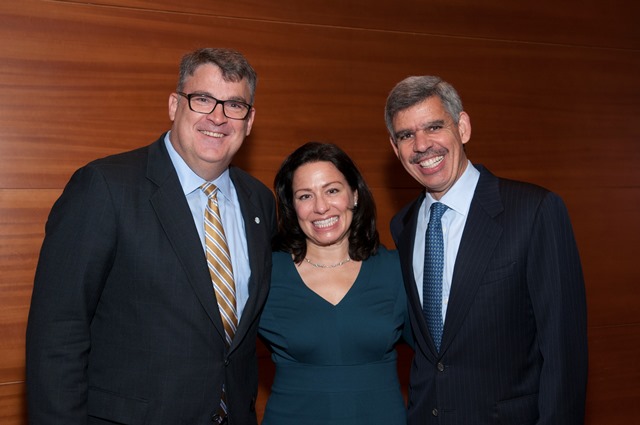 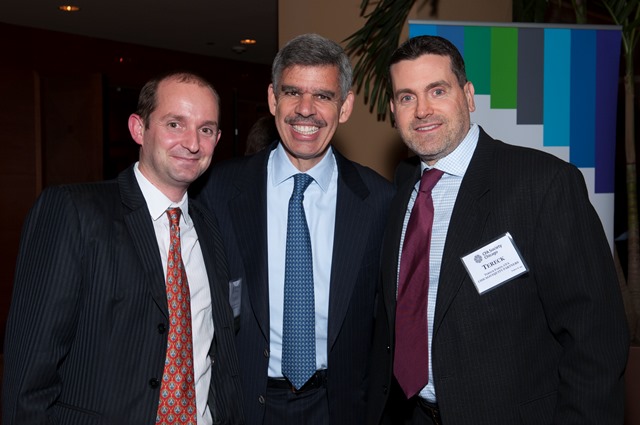 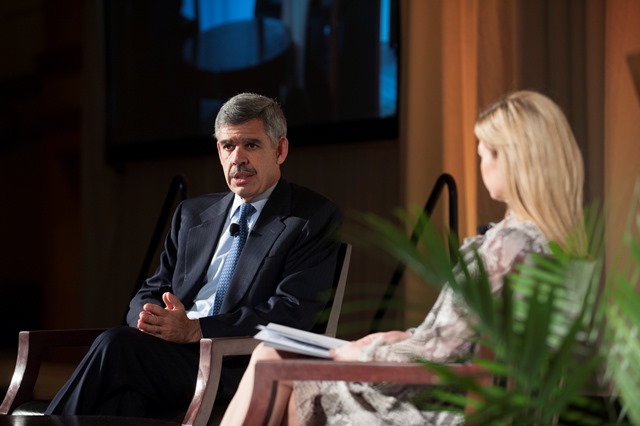 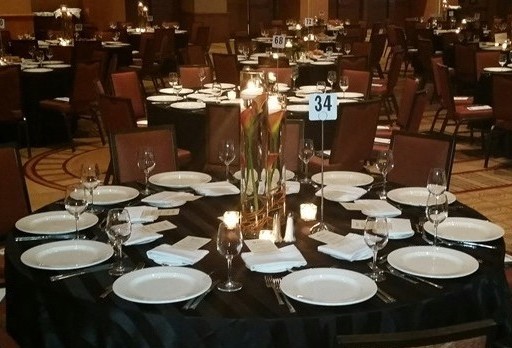 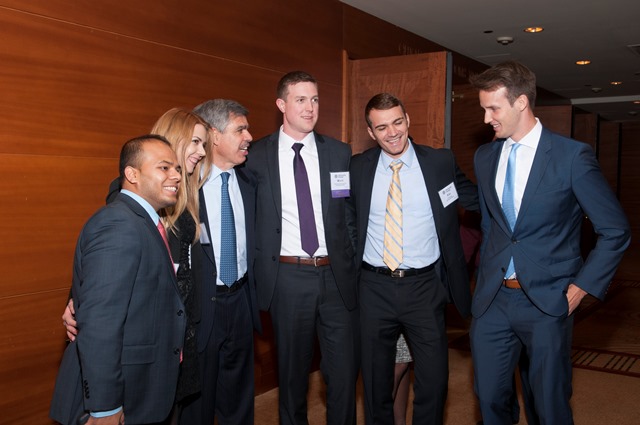