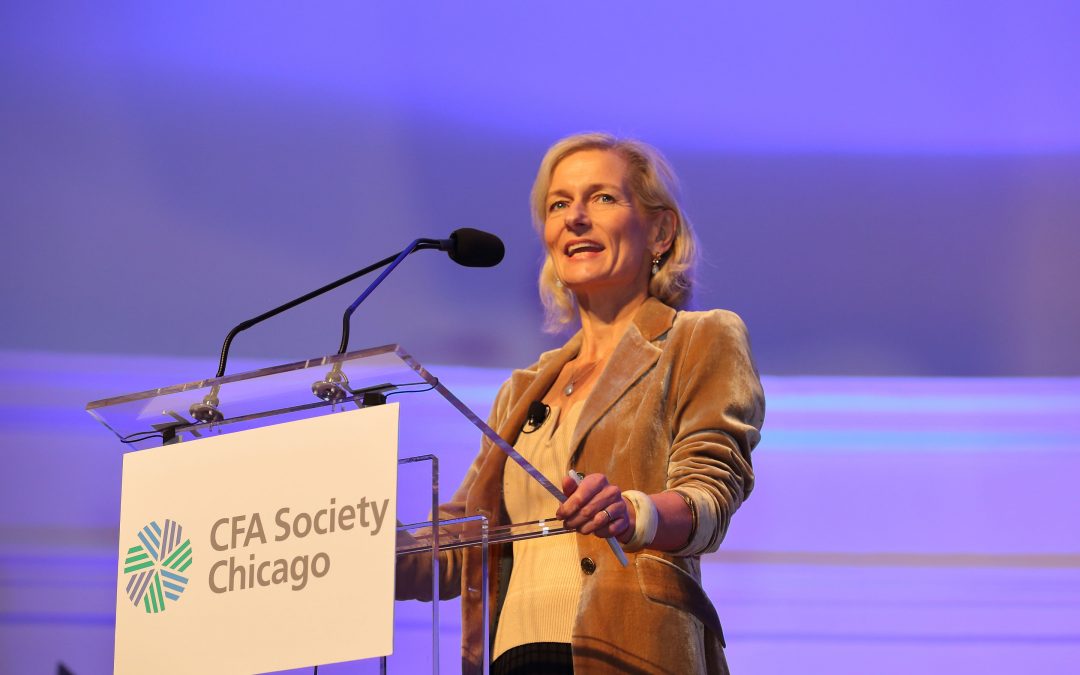 Over 500 charterholders, including 64 newly minted ones, and friends of the CFA Society Chicago gathered in the Aon Grand Ballroom on Navy Pier for the Society’s Annual Dinner on October 26.  Society CEO Chris Vincent welcomed the attendees and reminded the group of the Society’s upcoming Centennial year in 2025.  CEO Vincent turned the stage over to Bill Fitzpatrick, Equity Portfolio Manager at Logan Capital, and Chairman of the Board of the CFA Society Chicago.

Fitzpatrick began by outlining three strategic priorities for the Board.  First is to continue to emphasize data-driven decision making.  Second is to provide relevant programming in a changing economic landscape.  The third priority is to continue to build market integrity.  Fitzpatrick highlighted society member’s commitment to improve financial literacy among high school students as one example of this this effort.

Next on the agenda was the presentation of the Hortense Friedman Awards.  The first award honored Richard “Dick” Burridge, CFA, whose son and namesake, Richard Burridge, accepted the award on his behalf.  Dick Burridge, while in the Treasurer’s Office at the University of Chicago, pioneered the change of asset allocations at university endowments from all Treasuries to the inclusion of equities in endowment portfolios.  Mr. Burridge is a past president of the Financial Analysts Society of Chicago and a former Director of the National Financial Analysts Federation.  Mr. Burridge was dedicated to service and has been quoted to say, “If you give back to society, you have accomplished something.”

The second Hortense Friedman award was bestowed posthumously on Richard Driehaus.  Mr. Driehaus was a proud Chicagoan, a renowned Growth Equity investor, and an entrepreneur who built an asset management firm in his home city.  In 2000, he was named to Barron’s “All-Century” team of 25 individuals identified as the most influential within the mutual fund industry over the past 100 years. He was also highlighted alongside legendary investors Warren Buffett, Sir John Templeton, and Ben Graham in the book: “The World’s 99 Greatest Investors” by Magnus Angenfelt.

Following the celebration of the Hortense Friedman award winners, Fitzpatrick introduced the keynote speaker, Zanny Minton Beddoes, the editor-in-chief of The Economist.  Ms. Beddoes opened with prepared comments before Chairman Fitzpatrick joined her onstage for a conversation.

Ms. Beddoes characterizes the current period as the most uncertain period of her life, due to the confluence of several shocks.  Even before the enhanced volatility of 2022, the world was already contending with China’s rapidly aging population (would it get old before it got rich, and if yes, what are the consequences?); Climate Change; a demographic shift; and the Digital Revolution.

As she introduced the Big Shocks of 2022, Ms. Beddoes observed that there was a growing skepticism of Globalization across the Western World, even before 2022.  The invasion of Ukraine by Russia is the hallmark geopolitical event of the year.  In Ms. Beddoes opinion, it feels like all of Europe is at risk, not just the Ukrainians.  Putin thereby has brought the West closer together, she continued.  However, three quarters of the world’s population lives in countries that did not officially oppose Russia’s invasion, so the unity against Russian aggression seen in Europe is not present in the rest of the world.

The Energy shock is the second big Shock of 2022 she highlighted.  The world came to understand that Germany was far too dependent on Russian gas, and now there is a tremendous transition of Europe’s energy infrastructure occurring.  The Energy shock has fed the next Big Shock, Inflation, but Energy prices aren’t the only driver of this trend.

Ms. Beddoes offered four Provocations to the crowd.  First, she advised the group not to obsess about when the Ukraine War will end, but to think about the aftermath.  Ukraine will be the equivalent of Israel (a heavily armed nation serving as a bulwark against potential adversaries), but in the heart of Europe.  What does this mean?   Moreover, she opined that Russia would either have a revolution, which has happened before in that country after military defeats, or it would become China’s gas station.  Her last comment on the War in Ukraine was to warn the crowd that escalation risk is real.

The next Provocation advised the audience to pay closer attention to the People’s Republic of China and Taiwan.  Risks are real and worthy of our attention.  In her opinion, Chairman Xi obsesses about Chinese greatness and security, not about economics.  She cited the weaknesses of the Chinese economy: the property sector is a mess; continuing COVID restrictions; and timid entrepreneurs, who are afraid of provoking the state’s wrath.

Provocation Number three stated that the Energy Shock is really about who will dominate Energy markets in the next 10 years.  Though she is not worried about the break-up of the EU or EMU, Ms. Beddoes said that Europeans’ solidarity will be tested through this winter, as they are being complacent about gas inventories.  She asked whether the US wants to become a major LNG exporter, which it could do if it wanted.  Finally, she observed the petrodollar windfall landing in the Persian Gulf (particularly in Qatar, due to LNG exports) right now.

Her final Provocation was a forecast that the US will fall into recession in 2023, but that the Federal Reserve will not hammer inflation down to 2%, in order to avoid a steeper recession.  She believes the Fed has tolerance for inflation in the 4 – 5% range, a level that, in her opinion, may not be as pernicious as the near 0% inflation of the last 10 years.

Ms. Beddoes offered the Society three Winners and three Losers.  The US was the “big winner” in her opinion, given its energy superpower status and the innovativeness of the economy.  She sees India as a second winner, with the fastest growing large economy and a population that will overtake that of China next year.  Finally, because of the energy windfall flowing their way, the Gulf States are a third Winner, in her view.

The three losers in her view are: Russia, China, and her home country of the United Kingdom.  It sounded harsh to some ears in the audience for her to lump the UK in with the other two, but there you have it.

The formal events of the evening concluded, providing attendees with new perspectives and much to think about as we head toward the end of 2022.