A Taste of Latin America 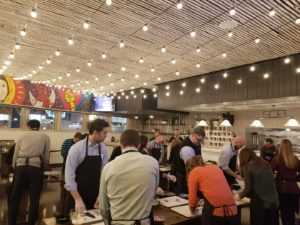 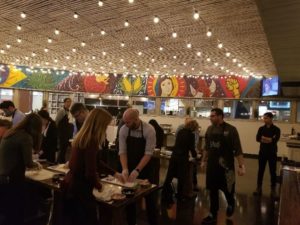 CFA Society Chicago held its latest social event on Marth 13th at the Mexican restaurant Pueblo. Pueblo specializes in traditional Mexican fare with a “contemporary twist”, and is located inside of Latinicity on the third floor of Block 37 (northwest corner of State and Washington). Latinicity features eight innovative kitchens, the sit down restaurant Pueblo, a coffee café, full bar, and lounge.

The program for the evening was simple; participants were to watch and learn how to make a three course Latin dinner with hands on instruction from Pueblo’s kitchen staff. The dinner menu included a side dish that each participant would make, while Pueblo’s chef, Marcos Flores would show the group how to make a soup and entrée. 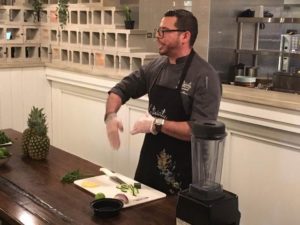 Chef Marcos began the program explaining to the group how to make the first course, Aquachile Ceviche. Aquachile Ceviche is a Mexican seafood dish that includes shrimp, pineapple, cucumber, avocado, celery, tomatillo, serrano, and cilantro. Chef Marcos provided some basic guidance on how to properly use a cutting knife, and then provided specific instructions on how to assemble the dish. Each person made their Aquachile at their station, which were close enough together so that acquaintances could be made and tips could be shared. I found out from sampling my station mates Ceviche that the smaller diced the ingredients, the better the dish.  It is suggested the dish be served with avocado and tostadas, and if you like, beer and tequila. 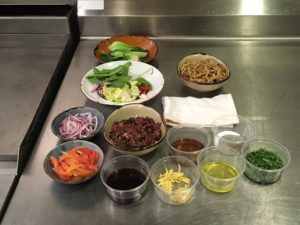 Once everyone had finished creating their Aquachile, Chef Marcos explained the steps required to make a large batch of Aquachile Sauce to accompany the dish. In a large blender he combined; garlic, white onion, chopped celery, fresh grated ginger, 2 limes, cilantro with stems, 1 whole serrano, 2 ice cubes, 3 small whole tomatillos, and kosher salt. Once those ingredients were blended olive oil was slowly added to complete the sauce. Chef Marcos advised that the sauce should sit for several minutes before serving, chilled. 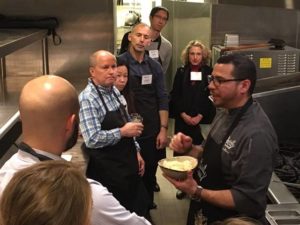 We relocated to the kitchen where preparations began for Ajiaco Soup – a creamy chicken and potato soup, and Lomo Saltado – a traditional Peruvian dish. The group gathered around Chef Marcos as he prepared the soup. He diced potatoes, and brought them to a boil. Next, he cut raw chicken into strips and browned them in a skillet. Potatoes, chicken, corn, cilantro, green onions, and other spices were then combined into a large pot and let simmer. Chef Marcos explained that Lom Saltado is a stir-fry dish that includes strips of sirloin, sliced onions, and whole tomatoes. Over a medium skillet with hot oil, sirloin was browned, onions and tomatoes were added and sautéed until they were soft. Chef Marcos advised that the dish is traditionally served over fries or rice. 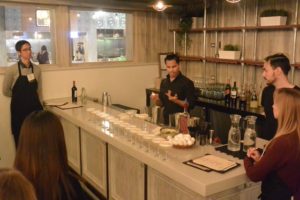 Once those dishes were complete, the group headed to the bar where Pueblo’s head bartender had been making a batch of Pisco Sours, which is made of Pisco brandy, egg whites, fresh lime, simple syrup, and bitters. The Pisco Sour originated from Peru or Chile, and is considered a South American classic. The drink’s name comes from pisco, which is its base liquor, and the term sour is in reference to sour citrus juice and sweetener. One of our group asked the reason for using egg whites. The bartender explained it adds a soft, element to the texture of the drink, and egg whites produce a layer that floats on top of the drink, which is ideal for decorating with drops of bitters or highlighting a garnish.

With drinks in hand we moved to the dining area to enjoy the fruits of our and Chef Marcos’ labor.  Pueblo staff had assembled a large table with the dishes of the evening; the Lomo Saltado, Ajiaco Soup, each participant’s Aquachile Ceviche, the chilled Aquachile sauce, and tortilla chips. 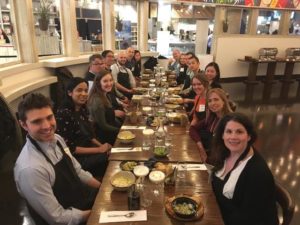 Over dinner we discussed a number of topics from, the reasons that brought us to the event, to economic growth expectations given the passage of the tax bill coupled the general uncertainty that is endemic to the current administration. Several of the participants noted they wanted to take a cooking class but not invest in a full cooking course. A couple of those people remarked that their experience at Latinicity would motivate them to enroll in a cooking class and another couple advised that they had been to Pueblo before and enjoyed the food so much that they wanted to replicate some of the dishes. Our group agreed that the soup was the hands down winner of the best dish of the night. Regarding economic growth expectations? We decided it was more fun to discuss the events of the evening over another Pisco Sour with new found friends.