CFA Chicago’s Distinguished Speaker Series recently hosted Harry Kraemer, an executive partner with Madison Dearborn Partners and Clinical Professor of Strategy at Northwestern University. Former Chairman and CEO of Baxter International Inc., Mr. Kraemer is author of the book, “From Values to Action: The Four Principals of Value Based Leadership”.  He spoke of the critical need to develop the next generation of leaders and of the “Four Principals” as illustrated in his book.

Mr. Kraemer stressed that leaders need to begin leadership early in their career showing that they want to be “in” the movie, not just “watch” the movie. Leaders must not be content to wait for “those guys” to make decisions; they must want to be one of “those guys”.

In order to influence people, leaders must be able to relate to people. They must also be able to employ common sense and have the ability to make complex problems simple.   It is important to demonstrate these attributes on day one of whatever job they begin.

The “Four Principals” of value based leadership are “Self Reflection”, “Balance”, “True Self Confidence”, and “Genuine Humility”.  In his presentation, Mr. Kraemer went on to describe each principal as follows:

Balance: A leader must be able to demonstrate knowledge about a wide array of topics. To understand all sides of a story, he must understand other perspectives. The incorporation of multiple perspectives makes it easier to move forward.

True Self-confidence: The ability to say “I don’t know” and the ability to say “I was wrong” is evidence that a leader has true self confidence.  An inability to say these things shows that he is too worried about what other people think.  Everybody has strengths and weaknesses and those must be acknowledged in order to improve.

Genuine Humility: A leader must remember where he came from and how he got to where he is.  Luck and timing can be just as important as skill set and prior work performance.  A leader needs to keep in touch with people who knew him “when”. 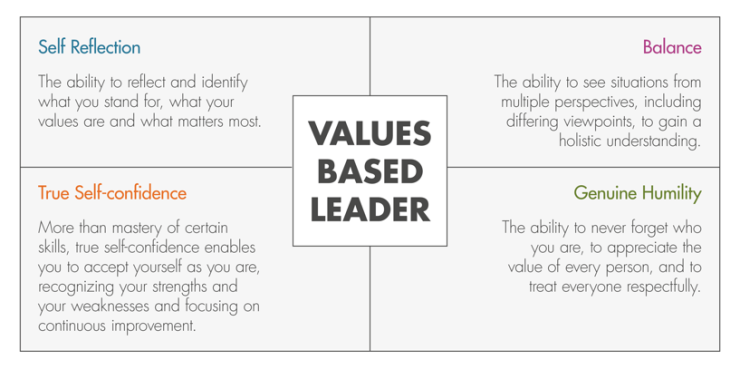 Mr. Kraemer stressed the importance of keeping in touch with a wide variety of people from within and outside the organization. He recommends that mentoring not be limited to one or two confidants, but rather come from a wide array of people.  This exposure makes it easier to determine what values are important.

Mr. Kraemer concluded his remarks by speaking about the One Acre Fund which benefits small farmers in East Africa.  The proceeds from his book sales will go to further the aims of the fund.