Ben Bernanke with Martin Wolf on the Global Financial Crisis

Ben Bernanke, former Federal Reserve Chairman, spoke with Martin Wolf, chief economics commentator and associate editor of the Financial Times, at the historic Chicago Theater about his new book The Courage to Act: A Memoir of the Crisis and its Aftermath. The book is Bernanke’s chance to take on some of his harshest critics and to explain, in great detail, the Federal Reserve’s role in saving the country’s financial system during the Great Recession. Bernanke was appointed chairman of the Federal Reserve in 2006, mere months before the financial system began to unravel. During his hour-long chat with Wolf, Bernanke talked about his childhood, Lehman’s failure, and his inability to refinance his home mortgage last year.

Bernanke grew up in South Carolina, where he and his grandmother often discussed the Great Depression, which he said sparked his interest in economics. He was particularly interested in the monetary policy failures of the Great Depression and how future crises could be handled without these mistakes. In fact, on Milton Friedman’s 90th birthday, Bernanke promised that he would het let monetary policy fail again.

Wolf pointedly asked about Bernanke’s decision to let Lehman fail. Bernanke contends that he did not let the bank fail; rather it was the only option. First, he points out that they did not miss the housing bubble. He noted that he spoke with then-President George Bush about what would happen if housing prices dropped significantly and they concluded there would be a recession, but it would be manageable. What they hadn’t anticipated was how quickly short-term financing to banks would dry up as the markets got spooked. This, he insisted, was a weakness in the regulations as the system had too much dry tinder.

Turning back to Lehman, Bernanke detailed the “Lehman weekend” which started with widespread calls from the financial media to let Lehman fail. He wanted to avoid this and hoped another bank would step in to purchase Lehman as JP Morgan had done with Bear Sterns. Two potential buyers stepped forward, Bank of America and Barclays, but after examining Lehman’s balance sheet, both declined. The next option was for the Fed to lend money to Lehman (as it did later with AIG), but Lehman had no good collateral against which it could borrow. In the end, Bernanke contends he had no choice and Lehman failed. 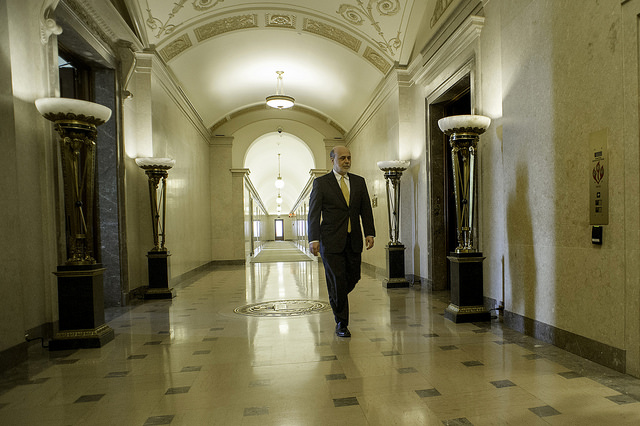 The mood lightened a bit during the audience Q & A, when Bernanke was asked about the lack of mortgage credit in the market today and whether he thought it had gone from too loose to too tight. Bernanke agreed and told of how he was prevented from refinancing his home because he no longer worked for the Federal Reserve and didn’t meet the bank’s minimum number of years of self-employment. Don’t worry, though, as soon as the media got wind of it, Bernanke was offered plenty of refinancing opportunities from other banks.