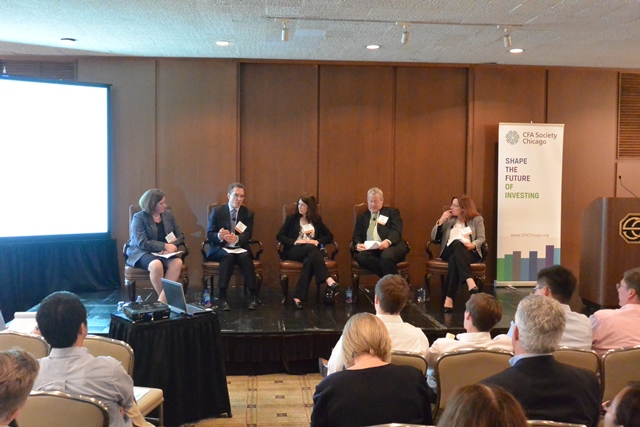 Many metrics and measures fall into the overall category of investment risk, including operational risk, market risk and credit risk. Investment risk is generally defined as “loss arising from changes in interest rates, credit spreads, equity prices, foreign exchange or commodity prices.”  Liquidity risk, at the forefront of many investors’ minds these days, could also be added to this list as a standalone item or included as part of price risk.

While a definition of market and credit risk may be fairly understood, the concept of “operational risk” is sometimes more nebulous. Operational risk could be described as “losses due to anything else, aside from market and credit risk”. But there are other ways to lose money that shouldn’t necessarily be categorized as true risks, such as not having the right strategy or the right timing on an investment, which could be considered outside the scope of what a risk management function can do.

Michelle McCarthy, Managing Director at Nuveen Investments, stated that each type of risk has its own type of P&L distribution. Credit, with its main reward being coupon payment and repayment of principle, has much lower upside and a bigger left tail, or possibility of large losses, than market risk, which follows a more normal distribution. Operational risk also displays a larger loss potential. Combining the three main types of risk into a single cohesive measurement becomes difficult given their differences in distribution.

There are also two primary styles of risk, binary risks and risks of degree. Binary risks are purely unwanted and offer no upside potential, and include things like fraud, theft and legal violations. Companies can use controls and processes to manage these risks to as close to nil as possible. Risks of degree offer upside potential, and are the result of an investment decision. These types of risks are market or credit-related, and need to be managed and monitored. As a risk manager, McCarthy looks out for hidden risks that may not show up in a risk report, risks that are disproportionate to the amount of the potential gain, and risks that have a potentially unexpected return distribution.

What types of risk metrics are important to a hedge fund manager? Jennifer Stack said that at Grosvenor they often look at many different measures instead of relying upon a single number, and utilize Value-at-Risk (VaR), contribution to VaR, stress testing and factor models the company has built. While VaR is helpful for a total portfolio view risk that can integrate exposures across asset classes, different asset classes often require different risk measures.  For instance, looking at the Value-at-Risk (particularly historic Value-at-Risk) of real estate is often misleading as returns look smooth and volatility appears artificially low as a result. Regarding how best to protect a portfolio, Jennifer said that as a hedge fund investor, “sometimes the best hedge is to sell.”

Mike Edleson of University of Chicago kicked off the panel with some background on his institution’s endowment. He described their organization as “very enterprise risk focused” and said that they employ a total of 28 investment professionals, with 3 devoted to risk management.

Noreen Jones of NYSTRS said that her pension sees its primary goal as funding liquidity. Every month, NYSTRS delivers benefit payments to 150,000 retirees, and these payments total $600 million a month. The pension’s risk management group is only two years old and was created in response to a regulatory analysis of a gap on calculating and reporting risk at the total plan level. In response, NYSTRS built their risk group from scratch and currently employs four risk professionals tasked with measuring and monitoring the risk of a $100 billion asset pool. Initially, the risk group found it difficult to get a buy-in on a formal risk management approach across portfolio management groups. While the public market groups were used to routine risk measurement and monitoring, the attitude of the private market teams was often “My portfolio didn’t lose money, so where’s the risk?”

Grosvenor Capital has $45 billion in AUM and approximately 400 employees, mainly in Chicago. Its primary business is a hedge fund-of-funds, where it invests money on behalf of institutional and individual clients into various external hedge fund portfolios. Jennifer Stack, the firm’s head of risk, said that their primary goal is to “achieve not only great returns, but to achieve great returns on a risk-adjusted basis.” Grosvenor operates under a system of checks and balances between its risk function and investing functions to achieve that goal.

The panel discussed how risk ought to fit in with the broader investment function. According to David Kuenzi of Aurora Investment Management, risk management can’t be merely a policing function focused on divesting “too risky” securities; it needs to be a collaborative exercise with the portfolio management team.

Sometimes being a risk manager can be a very lonely place. During the Dotcom boom of the late 1990s, McCarthy had to have difficult conversations with star portfolio managers making piles of money on internet stocks about their sector concentration risk. To Jennifer Stack, risk “is not so much about policing, but having a second set of eyes.” And often the best portfolio managers will welcome a conversation about risk, added McCarthy.

“We’re a little different than other endowments,” Mike Edleson said of his employer, the University of Chicago endowment fund.  Instead of a traditional investment policy statement that would dictate targets for asset class allocations, University of Chicago follows a risk budgeting approach. “There are 12 or 13 things that we’ve found to be our primary risk and return drivers,” Edleson said.

As University of Chicago researched risk budgeting and a potential shift away from a policy statement to guide investment allocation decisions, they determined that equity market performance was the most important factor for overall risk and return. This led them to the formalization of their risk budget, which is comprised of four pillars:

University of Chicago is not the only investor looking at employing a risk budgeting framework. Jones said NYSTRS is also working on one, and the Employees’ Retirement System of the State of Hawaii is also building an allocation strategy around risk factor groups instead of asset classes. Edleson said that staying right on their risk budget forces a discussion around trade-offs into each allocation discussion, putting risk at the forefront of every decision made.

Buying illiquid assets may look good on the way in, as each subsequent purchase by a portfolio manager tends to raise the price, but could pose a problem on the way down if there is a dearth of buying interest.

For Jones at NYSTRS, coming up with the $600 million due to beneficiaries each month is a huge challenge that is at the forefront of the fund’s investment officers’ minds. In addition to the benefit payments they must pay, they also must deal with flows from rebalancing activities and undrawn commitments that need to be paid. They do a cash flow projection to help guide their allocations and measure their liquidity in months of payroll. Given their high liquidity needs, NYSTRS has a large chunk of its portfolio in Treasury securities, one of the world’s most liquid markets.

In a hedge fund context, measuring and managing liquidity can be a bit different. Jennifer Stack of Grosvenor looks at liquidity in two ways: the degree of mismatch between a manager’s long term investment and short-term financing, and the underlying asset liquidity.

While investors usually want as much liquidity as possible, there is a potential for too much liquidity. University of Chicago actually rejected two hedge fund managers’ proposals as they found the redemption terms to be overly generous given the liquidity of the underlying securities. The endowment didn’t want to find itself last to redeem if there was a stampede out the door, which could result in the endowment holding the most illiquid portions of the manager’s positions.

Managing Risk in a Crisis

Another risk management puzzle arises because “Humans are stupid, and we love to buy high and sell low,” said Edleson, “Especially those in the investment community”. As with any shrewd investor, the University of Chicago endowment wishes to be countercyclical with their private market allocations, but this is “horrendously hard to do in practice”. So University of Chicago always does the same thing, and keeps their beta consistent across normal and distressed market conditions.

“How does one account for betas changing in a crisis event?” McCarthy posed to the panel. At Aurora, David Kuenzi likes to run his portfolios through a stress test focused on the Lehman Brothers bankruptcy in 2008, which he said was “a gift, in a sense” to risk managers as it provided a recent event to use to see how portfolios might perform in a crisis condition. While many securities of today’s portfolios weren’t around in 1987, one of the most common stress test scenarios risk managers like to use, many of the securities in today’s portfolios were around in 2008.

Another facet of risk that University of Chicago focuses on is the potential for regime change, particularly how correlations between securities tends to change over time. As risk-on, risk-off has been the flavor du jour for the macroeconomic environment for nearly a decade, this isn’t always the case. Edleson said that over time, stock and bond correlation is positive about 50% of the time and negative 50% of the time, making it difficult to discern any general relationship outside the context of each particular regime. In addition to stress testing prices, it’s worthwhile to stress test the correlations between market variables and model the effect of potential regime changes on the portfolio.

As risk evolves from measures like duration to Value-at-Risk to modeling macroeconomic shocks, there are a dizzying amount of metrics investors can look at and use to manage their portfolios. As risk practitioners, “We don’t know the future, but we can know our exposures,” said McCarthy. We can determine how our portfolios might break down in an extreme event, and we can instill a culture of risk awareness in our organization in order to avoid huge losses, with hope of buying during a crisis as opposed to selling.