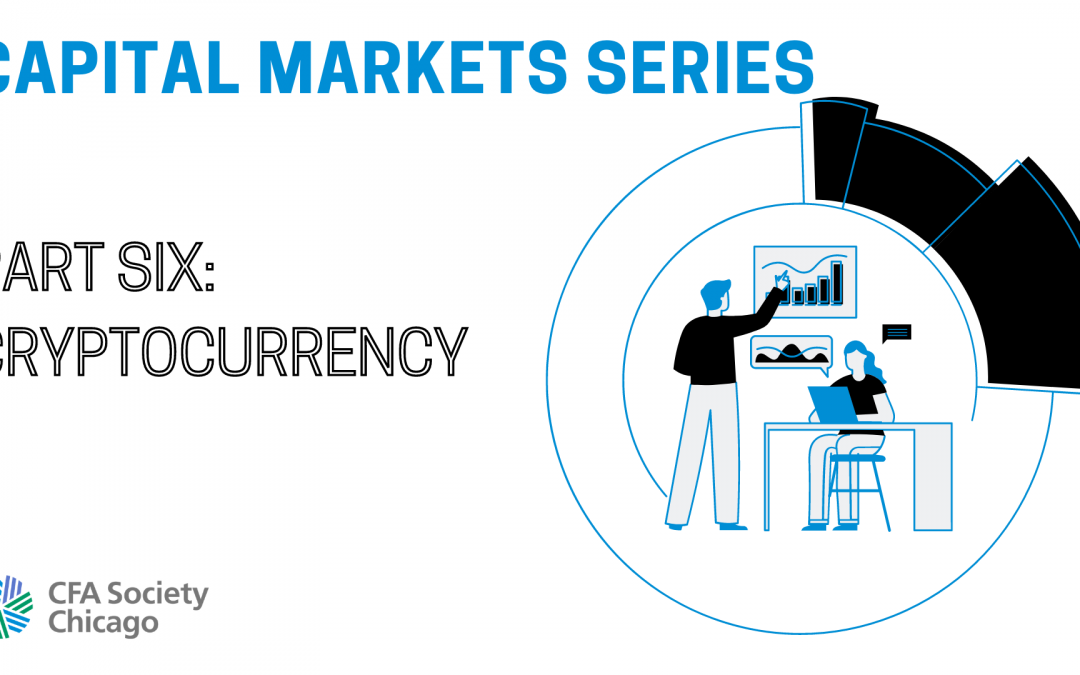 Cryptocurrency represents the most volatile asset that comprises the capital markets in 2021. Price swings of greater than 10% in one week are common. At times it seems as though price action is driven primarily by the tweets of Elon Musk, CEO of Tesla who has added bitcoin to its balance sheet. On May 13, 2021, the Society’s Education Advisory Group hosted a very timely video conference that attempted to address recent events affecting this asset class and its use in a portfolio.

Hale kicked off the panel discussion by warning the virtual audience that “DYOR” is extremely important when it comes to cryptocurrency. “DYOR” is an acronym for the phrase “do your own research”. We will list more sources of research at the end of this blog post, which will hopefully aid in “DYOR”. Hale also mentioned the race between centralization (China’s yuan-based cryptocurrency) and de-centralization (bitcoin and other cryptocurrencies), and her belief that it was an extremely important issue.

After introducing the panelists, Hale asked Hougan what misconceptions investors encounter when it comes to cryptocurrency. Hougan stated that crypto was rife with misunderstandings and described it as a once in a generation technological breakthrough. He cautioned investors to not think about cryptocurrency as something you would use to pay for your coffee at Starbucks. He envisions cryptocurrency as dollar bills allowed to move over the internet, a tool to move a billion dollars across the word in 10 minutes for a fee of 57 cents.

McCourt described the evolution of CME’s involvement in bitcoin from reconciling disparate pricing in 2016 to the advent of bitcoin futures by the end of 2017. These events led to more adoption by institutional investors. Mitchnick stated that BlackRock had been following crypto since 2016 and now uses it as a tool to generate alpha for clients.

Hale asked the panelists to address crypto energy consumption, which thanks to a recent Elon Musk tweet was the topic “du jour”. Hale asked the panelists if there was a silver lining to this type of energy consumption. Mitchnick stated that BlackRock takes sustainability seriously, and it is not a good defense to say that other industries do it. Hougan was quick to point out that crypto was still in a state of evolution and that although “proof of work” consumes energy, “proof of stake” is carbon neutral. “Proof of work” is the actual act of crypto mining, while “proof of stake” refers to proof of ownership. He asserted that Musk’s statement ignores both sides of this ledger. McCourt believes that crypto will lead to better governance, and allow easier banking to those that remain unbanked.

Hale asked an audience question on whether further SEC regulation will be beneficial to crypto.  Hougan asserted that increasing clarity drives bull markets and that further regulation will continue to drive bad actors away. The rest of the panel agreed with Hougan with McCourt stating that the CME will insist on certainty, transparency, and trust when dealing with counterparties.

Hale asked about GBTC “Grayscale Bitcoin Trust” and how close it was to getting permission to become an ETF. The panelists thought the argument for an ETF was supported and that it would have major benefits. McCourt stated that the ETF would help in price discovery and risk mitigation. Hougan stated that Bitwise was working with the SEC on this and the eventual result would be increased investor protection and a lower price of holding. Although the panelists refused to guess when an ETF might occur, they did agree that the scope of the remaining issues was becoming much smaller.

Hale asked the panel about “DeFi” (decentralized finance), and what its practical benefits are.  She wondered if she could get a mortgage in 10 minutes. Hougan stated that “DeFi” is the idea of programming money which crypto allows you to do. Many financial functions are simply IF-THEN statements that can be turned into software and automated. A financial function like a mortgage is perfect for this use. Hougan pointed to the UNISWAP protocol as a large decentralized finance asset that competes with Coinbase and allows trading between different crypto assets. McCourt stated that “DeFi” has the power to make a banker’s job far easier.  Mortgages can be made in seconds and money moved more quickly. Mitchnick mentioned how disruptive “DeFi” can be and how it will change the nature of financial services; however, it is currently not really mature. Hougan pointed out that DeFi can be susceptible to fraud and that it must go through code audits as new products have more risk.

The panel was then asked to address the role of Stablecoins (a digital representation of a dollar that can move over the internet) in finance. Facebook attempted to launch Libra which underwent changes and whose name has been changed to Diem. Mitchnick stated that the media narrative of Facebook’s attempt to launch this stablecoin is overstated. Diem will not have unhosted wallets and will be based on a single denomination. Hougan stated that stablecoin is a digital representation of a dollar and is pegged 1 to 1 against the dollar. It can be moved across the internet like any cryptocurrency.

Hale then asked about excess leverage and crypto. McCourt stated that they can offer leverage to customers, however there must be a transparent approach to margin. CME currently offers 35% (3 times) leverage. The danger is that unregulated platforms may offer much more.  Mitchnick commented that excess leverage contributed to a loss of 50% of bitcoin value on March 12, 2020.

An audience question concerning Ethereum 2.0 was addressed by the panelists. Ethereum is the second largest cryptocurrency by market capitalization. The panelists thought 2.0 moved the scalability of Ethereum to a new level with respect to “proof of stake”.  Proof of stake will now be used as a consensus mechanism rather than “proof of work”; this will lead to less energy consumption. Hougan mention that EIP 1599 will be another step in the right direction. It represents a technological upgrade of the ethereum blockchain with a changed fee structure that will lower miner’s fees.

Hale then asked the panelists how it views crypto as a hedge against inflation. Mitchnick stated that crypto is not scarce and more is made every day.  Gold is a well-known inflation hedge; digital gold has proven that it does not behave as gold.

The panel then wrestled with whether current crypto prices are warranted or that it might be in a bubble.  McCourt was noncommittal but did note that on the short side crypto is inefficient. The totality of its value might include some hype. This might mean that more value is extracted from crypto than is warranted.  Hougan stated that crypto was not in a bubble but its price was wrong.  The value remains difficult to determine, but there is a place for a currency that is not country-centric.

Hale asked the panelists if quantum computing will render cryptocurrency useless. Mitchnick stated that role of crypto with quantum computing is viable and a quantum secure wallet will be required in the future. Hougan stated that the bitcoin blockchain is 1,000 times larger than the largest supercomputer currently in the world. The panelists pointed out how a once fragile asset class now appears to be relatively safe from sovereign attack. The panelists agreed that eventually central banks will be buying crypto. They pointed out that S&P 500 companies are buying it and it is appearing in more portfolios.

This presentation resulted in many questions from the virtual audience. Hale condensed them down to 1. How bitcoin would be used in the future? 2. How much of my portfolio should be in bitcoin? and 3. What will be the environment for bitcoin 5-10 years from now? McCourt was excited about the future of bitcoin. In the future he argued that you might even pay for your coffee using bitcoin as the coins would be divisible into smaller units that would be used as a form of payment. Mitchnick compared bitcoin to digital gold only more scalable. Hougan suggested that a current proper portfolio allocation for bitcoin is 0-5%. He also stated that if Mitchnick is correct; the future bitcoin might be as boring as gold with lower volatility and a higher price. When blockchain was created the ability to program and move money through the internet led to digital property rights that enhance security.

In response to Hale’s question concerning how someone can educate themselves about cryptocurrency the panel had a number of suggestions. This fit well with Hale’s warning at the beginning of the presentation to “DYOR”. They spoke of the following sources:

“Cryptoassets: The Guide to Bitcoin, Blockchain, and Cryptocurrency for Investment Professionals” by Matt Hougan and David Lawant

There are two articles and three multimedia presentations on the topic of cryptocurrency that currently can be found on the CFA Institute website.

Hougan also recommended the news site “Blockworks” and strongly recommended the book “Out of the Ether” by Matthew Leising.  Per Hougan, books frame the narrative of a topic far better than news stories.

McCourt recommended research on the CME Group website: cmegroup.com/bitcoin. You can find courses entitled “Introduction to Bitcoin” and “Bitcoin Futures”. Mitchnick reiterated the above sources and also recommended research by Andreessen Horowitz, a venture capital firm that features on its website a “Crypto Canon”. Hale mentioned that on EconVue there are many discussions on cryptocurrency.

I am sure there are many other sources to be found, but these are a good beginning for an investor.