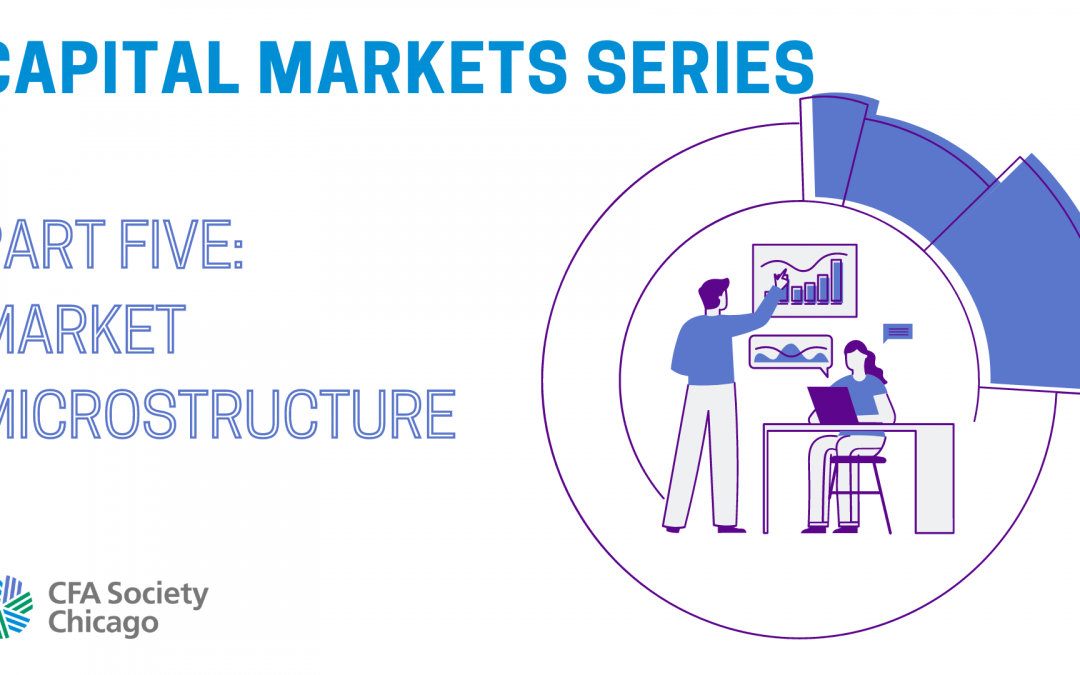 On April 21, 2021, a full house gathered on Zoom to listen in on a panel discussion about ETFs and their effect on market microstructure, hosted by CFA Society Chicago’s Education Advisory Group. The discussion was moderated by Ben Johnson, CFA, director of global ETF and passive strategies research at Morningstar, and featured three panelists—Mike Green, CFA, portfolio manager and chief strategist at Simplify; Maureen O’Hara, Purcell Professor of Finance at Cornell University’s Johnson Graduate School of Management; and Eric Pollackov, global head of ETF Capital Markets for Invesco ETFs. The conversation started with an overview of the growth of passive investing vehicles.

Johnson kicked off the discussion by asking the panelists for their thoughts on the consequences of growth in passive investing through index funds. O’Hara answered first by highlighting the increased accessibility to certain asset classes for retail investors, consequentially resulting in increased liquidity for more illiquid asset classes such as emerging markets debt and real estate. However, those benefits also come with costs to the passive investors, such as increased exposure to risky assets like oil futures or leveraged products. She continued to say some academic research is contending that the inherently illiquid nature of some asset classes that are being wrapped in ETFs poses structural problems for the financial system, but she believes the current research is overly pessimistic. Green followed up from O’Hara’s response by reiterating the risk that exists in the system. He believes that the broad macro structure of the investment markets is sound, but that there are microstructural components that pose significant risk, pointing to the microstructure effects that buffeted the recent GameStop hysteria. Pollackov tamped down the more dangerous picture that Green painted, believing that there is less microstructural instability, and continued to say that ETFs have created a boon for retail investors that far outweigh any costs from current structural risk. He also shared with the audience his belief that passive investment vehicles have changed the way stocks are valued, contending that the belief that all stocks are trading based off some fundamental analysis is no longer true, again pointing to GameStop, leading to a serendipitous tangent about that event.

The panelists briefly veered away from the planned discussion to dive deeply into the GameStop market event from earlier this year, 2021. O’Hara shared her thoughts on the investor psychology that led to the run-up of GameStop stock and asserted that ETFs that were holding GameStop were victims of the irrational hysteria. Green responded to O’Hara’s remarks by alleging that the ETFs were not victims, but unwitting participants that were complicit in the event. Pollackov, while not agreeing in full with Green’s allegation, pointed out that some ETF’s securities lending business saw a huge benefit from the GameStop event, making them look less like victims.

Johnson then re-focused the conversation, asking Pollackov if buying an ETF share results in any net new demand for the underlying securities since buying ETF shares doesn’t really “express a view” on individual securities. Pollackov responded by walking the audience through the flow of money in an ETF purchase, ending by noting that eventually a market maker will have to buy underlying securities to cover purchases of ETF shares, creating demand. However, the whole process is reactionary and the flow of money from ETF share purchases to security purchases is non- linear.

Next, Johnson steered the discussion to the benefits of ETFs, asking the panelists what they considered the market’s greatest benefits from ETFs. Pollackov started by pointing to lower investment costs, liquidity enhancement, and increased transparency for retail investors. He also pointed out that ETFs can simplify investment strategies and create tax benefits for professional investors. O’Hara elaborated on and expressed caution about the liquidity enhancement and increased transparency for retail investors, pointing out that these features can create inappropriate “feedback trading” on inherently illiquid asset classes. On balance, however, she believes that these features create more good than harm in the markets. Green rounded out the panelists’ response by discussing Simplify’s philosophy, which is to take advantage of regulations impacting ETFs and create vehicles that provide exposure to non-linear trading strategies. He explained his own view that the current market structure creates distorted return structures, and Simplify is aiming to capture those distorted returns in ETFs.

After discussing the benefits and costs of ETFs, Johnson asked the panelists how far they think is too far for ETFs. The panelists responded unanimously with “it’s too early to tell.” O’Hara started by contending that the ETF wrapper is a better structure for many assets for a lot of reasons, and this enhanced structure has led many people to make ETFs the building blocks of their portfolios. This adoption trend has also led to a shift in financial research, with researchers no longer focusing on valuing individual stocks, but focusing on valuing baskets of products. Green followed up by pointing out that ETFs are a vehicle for “passive as a concept,” and we will likely see accelerated adoption of ETFs as younger investors take on a greater share of assets. Pollackov echoed O’Hara’s and Green’s sentiments and built on O’Hara’s point about a shift in financial research. He pointed out that the increased adoption of ETFs, and the resulting shift in research demands, has revealed an increasingly complex investing environment. But, he also pointed out, while there is increasing complexity, there is also increasing transparency with ETFs.
O’Hara then took an opportunity to flip Johnson’s question around, asking if the product is the problem or if the regulatory landscape for them is the problem. Piggybacking off Pollackov’s point on increased transparency, she pointed to large family funds that are shrouded by regulation that eliminates their need to report a lot of information to the SEC. The whole panel then proceeded to discuss how slow regulation is to react to new products and themes in the industry, and that, eventually, there will be some market event that causes regulators to step into the market microstructure space.

Continuing from this last point, Johnson asked the panelists if they could share their thoughts on how notable past market events, and the regulation that resulted from them, has affected the current microstructure landscape. Pollackov pointed out that while there has been some positive regulation in the trading landscape, there is one last piece of regulation that he sees as necessary—the harmonization of limit up and limit down on Tier 1 and Tier 2 securities so that they have consistent triggers. O’Hara stated that the way regulators oversee markets has changed drastically since she served on the Flash Crash Committee. Specifically, she pointed to increased collaboration between regulators as an improvement, but believes the best way for these bodies to regulate the market it to take a more harmonized approach. She contends that, like the markets which they regulate, the regulators should have a more coordinated and unified approach to regulation, but such ideals are unlikely to materialize due to politics and other dimensions that get in the way. Green rounded out the response by sharing a different perspective on regulators’ inefficiency—they are overwhelmed with more pressing problems. He pointed out that new markets are constantly being created, and those new markets are constantly creating new fraud schemes, which take precedence of the regulators’ attention. He pointed to the cryptocurrency markets as a recent example of a new market that has been riddled with fraud schemes that the regulators have to pay attention to. He also shared another, more theoretical, perspective—that regulators and the public have lost sight of the true objective function of the markets. Green stated that the true objective function of markets it to match products with capital, but recently the focus of the objective function has seemed to be ensuring Americans’ retirement.

Can regulation address some of the concerns we’ve highlighted today?

Keeping with the regulation theme and rounding out the panel discussion, Johnson asked the panelists if there were any opportunities for regulators to correct some of the problems that they had pointed out in the discussion. Pollackov stated that he believes greater regulation of market microstructures is not the answer to any of the aforementioned problems. Instead, he believes that investors need to update their investment perspectives, focusing less on the valuations of individual companies and more on valuations of ETFs and similar types of passive vehicles.

At what point do we have so much indexing that markets break?

O’Hara doesn’t believe we’ll reach such a break point because the profit motive will prevent markets from reaching that point. Green pointed out that the impact of passive-investment adoption will be non-linear, and the acceleration toward mass-adoption will result in a concentration of the markets that will lead to a tipping point that sends investors to other actively managed products

Is concentration resulting from passive investing a problem in the markets?

To answer this question, O’Hara asked listeners to take a step back and assess what economic forces are linked to concentration. Concentration is undoubtedly a problem, but it’s hard to say how big of a problem, and one consideration of concentration is that any negative shock to the markets will hit the biggest players the hardest, creating a bit of a disincentive. O’Hara expressed greater fear over the machine-learning algorithms that underlie many passive investment strategies.

What happens if indexing becomes a high percentage of investments?

Pollackov stated that we will never reach 100% pure indexing because there will always be humans with egos big enough to believe they can beat an indexed strategy.