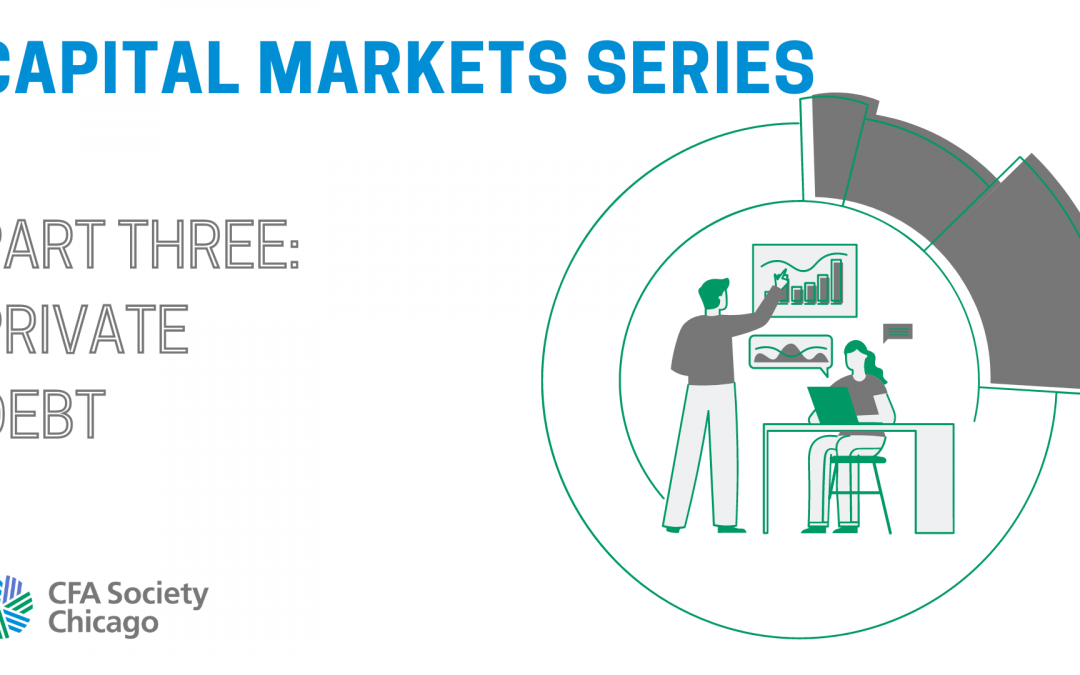 The development of the market for private debt (or private credit) was the subject of the third installment in the four-part series on capital markets hosted by CFA Society Chicago’s Education Advisory Group on November 18, 2020. The private credit market has grown from practically nothing in the past few decades to fill a void left by recent changes trending among commercial banks—consolidation, which has left fewer banks to serve the needs of debt issuers, and new regulations that, since the last financial crisis, have encouraged banks to seek greater scale in operations. These changes have left many middle-market firms underserved in debt financing. A new type of lender has entered the market to serve them—the private debt investor.

The event featured a panel discussion among three experts in the field, each addressing it from slightly different approaches. Chris Brown, CFA, is a managing principal in the Opportunistic Investing Group at Allstate Investments. The group provides bespoke, private financing solutions to capital-constrained or underserved issuers. Working collaboratively with other companies, sponsors and stakeholders they invest across a range of transactions and security types in a variety of industries. Phil Kain, CFA, is the founder of Rush Street Capital, a Chicago-based, boutique investment bank that provides both private debt and equity financing as well as advice on mergers and acquisitions and financial restructurings. Zia Uddin, CFA, is a partner and portfolio manager for Private Credit Investment at Monroe Capital. Monroe Capital, also based in Chicago, is a private credit asset management firm specializing in direct lending and opportunistic private credit investing. The firm provides private credit solutions to businesses, special situation borrowers, and private equity sponsors. Moderating the discussion was Christian Barron, CFA, of LQD Business Finance who represented CFA Society Chicago and its Education Advisory Group. Barron started by asking the panelists a series of questions that drew a picture of the private debt landscape and then dove deep into special considerations for private debt financing.

The first question was directed to Uddin, and Barron asked what the premise was for founding Monroe Capital. Uddin responded that private debt was little understood or appreciated when Monroe was founded in 2004, but that has changed significantly since then. Interest from investors has accelerated since the last financial crisis, driven by the protracted period of low yields available in the public debt markets. Monroe focuses on senior, secured direct lending to middle market companies (of which there are over 200,000 in the United States). They close 40-50 deals per year selected from about 2,000 that they consider. He emphasized that their investment strategy is an active strategy designed to generate alpha.

Barron directed the next question to Brown, asking him to provide an explanation of mezzanine lending. Brown described mezzanine lending as standing below senior debt but above junior debt and equity. Sometimes it’s casually called “tweener capital”. Allstate invests in highly structured deals and seeks expected returns in the mid-teens. That might appear high to the uniformed observer, but borrowers consider it cheap in comparison to the cost of private equity.

Barron rounded out the exploration of the private debt landscape by asking Kain to describe his investment brokerage process, and explain how the private debt landscape has changed over the years. Kain, who as an investment banker is more of a consultant than an investor, noted the inefficiency of the private debt market. This stems from a lack of familiarity with the product among middle market companies—many have worked with private equity investors for a long time but are new to private credit. There are a variety of both debt structures and investors (insurance companies, boutique asset managers, etc.) which the borrowers find confusing. So, Kain and Rush Street Capital advise clients on structuring a customized deal that best matches their needs. Kain continued to say that there has been enormous growth in this space, largely due to the increase in banks’ Dodd Frank regulatory obligations. Brown and Uddin concurred with Kain stating that they have experienced growth in their own businesses since the ’07-’08 reform.

Pivoting the discussion to dive into private debt considerations, Barron asked Uddin to describe Monroe’s underwriting standards. Uddin said all opportunities are unique in this market so he can’t apply a “cookie cutter” approach. Monroe Capital conducts its own research and analysis internally and concentrates on working with companies that have a defendable business strategy and operate in strong industries. The firm stays away from distressed situations and focuses on reliable cash flows that don’t include any special financial items that often make reported EBITDA just “noise” in his opinion.

Barron then shifted his attention to Brown, asking him about the various considerations that exist for mezzanine financing and the common uses of cash raised in private debt markets. Brown pointed to debt seniority, convertibility, and coupons as important considerations in a mezzanine deal that he and his team recently executed. For common uses of funding, he listed working capital as the most common and research and development as the next most common. He also pointed out that coupon interest isn’t always paid in cash. It can be PIK (paid in kind) depending on how the deal is structured.

Barron then asked Uddin about conflicts of interest between debt and equity. Uddin acknowledged that debt and equity investor conflicts are a real concern, and highlighted that the passage of time is a friend of the equity investor, but not the debt lender. Without going into details he said budding conflicts need to be monitored closely and addressed promptly.

Barron continued to probe Uddin asking him about covenants and borrow health. Uddin stated that Monroe Capital considers covenants to be of growing importance but treats them more as guard rails that allow the lender to have a frank discussion with the borrower so they can address the causes of a problem. Without providing specifics, he said they will add on to standard covenants with terms that recognize the business’s key performance drivers—metrics that will predict how the business will do in the future. Brown, of Allstate, listed familiar measures such as fixed charge coverage, and liquidity ratios as their common covenants.

Uddin then emphasized the importance of maintaining a dialogue with the client on a regular basis. He described Monroe’s process as “bespoke”. It’s very detailed and labor-intensive from approval through monitoring, requiring great diligence. Brown said Allstate usually invests with a partner that is experienced in the borrower’s industry and leans on them to maintain face time with the borrower and to monitor compliance.

Barron then asked Kain where he believes we are in the credit cycle amid the COVID-19 pandemic. Kain responded that Rush Street Capital has been expecting the cycle to turn down for several years and, earlier this year when the COVID pandemic hit, he thought the chances were increasing, but things have rebounded quickly. He considers the market now to be as healthy as it was in January. The firm continues to seek opportunities to advise on new deals. Prior to the pandemic, regulators were leaning on banks to pull back on lending, but that has since changed. Now they are encouraging banks to lend more to help the economy recover. This has eased conditions for borrowers, but it may only last as long as the pandemic.

Barron rounded out the discussion by asking the panelists how the COVID pandemic has affected their businesses. Uddin emphasized that Monroe always underwrites to a recession so its portfolio has held up very well, which speaks to the strength of their process. Also, they favor industries that are better protected from lockdowns (software, health care, business services, etc.) and shy away from industries that require more face time with customers. Now that they have experience in dealing with a pandemic environment, they are adjusting their underwriting practices accordingly. In March many companies drew down their revolving credit lines fearing that banks would reduce them. That proved not to be the case, so much of that is being repaid. Kain noted that there is ample dry powder waiting to enter the market. There are good deals being done, although the analysis includes a “COVID adjustment” to EBITDA. There is no relaxing of standards.

The session concluded with a single audience question: are low interest rates affecting new deals? The panelists responded with a resounding “yes.” Brown said that lenders have been able to raise lots of new cash seeking the attractive returns available in private credit. Kain added that asset-backed lenders experienced a lot of repayments when borrowers drew on revolving credit lines in the spring. They are still looking to reinvest that capital.