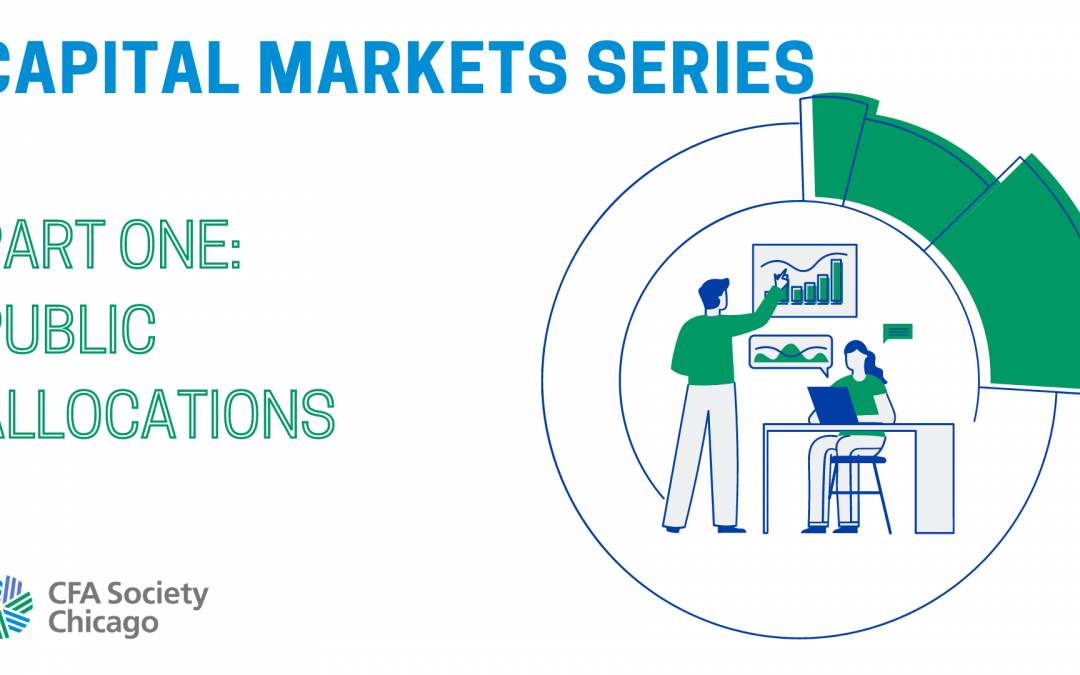 On October 7, 2020, a resilient crowd gathered via Zoom to listen in on the first installment of CFA Society Chicago’s four-part Capital Market Series, focusing on public markets. The event was a panel discussion featuring Bob Browne, CFA, executive vice president and CIO at Northern Trust; Bill Driscoll, CFA, CFP, director of research at Oak Family Advisors, LLC; and Michele Gambera, Ph.D, CFA, co-head of Strategic Asset Allocation Modeling at UBS Asset Management. The discussion was moderated by CFA Society Chicago member Lotta Moberg, Ph.D, CFA, analyst with the Dynamic Allocation Strategies team at William Blair. Moberg opened the discussion by asking the panelists to discuss what was on everyone’s mind, COVID and the election, and then meandered through topics such as correlation between growth stocks’ performance and market performance, monetary policy, as well as an analysis of recent stock performance trends.

Moberg kicked off the discussion by asking the panelists how they have changed their long-term outlook in response to the pandemic. Driscoll started by saying he was surprised by the Fed’s rapid response to the pandemic and speculated that such a response may be indicative of some other underlying problems. He also expressed his expectation that interest rates will remain low for a very long time, painting a relatively grim outlook. Browne echoed some of Driscoll’s concerns regarding the Fed response by noting that the impact of the COVID pandemic is being buffeted by extenuating concerns such as low economic growth, aggressive monetary policy, and inflation worries. More specifically, he indicated that he expects growth to remain around only 2% for at least the next 5 years and that COVID will act as a catalyst for higher inflation. Gambera elaborated on these responses by pointing out the Fed’s recent decision to lower the real-inflation level of cash. Moberg and the panelists agreed that there was broad consensus around the higher interest rate path before COVID, but expectations have now been revised downward.

The discussion continued with Moberg asking the panelists if they believed COVID could have been hedged against. The entire panel agreed that hindsight offers clear ideas for hedging, but the most realistic defense against the pandemic’s shock was a balanced portfolio. Browne started the response by pointing out that the best long-term play was high-quality, low-duration bonds. He also asked panelists rhetorically, “is the 60-40 portfolio dead,” conjecturing that such a portfolio, coupled with an event hedge, would have been a strong defense against the COVID shock. Gambera followed Browne by pointing out that event-hedges would be attractive in this sort of event, but the transaction costs for such a hedge are so high that they are unattractive in the moment. He pointed specifically to the VIX as a hedging instrument and urged listeners to buy VIX futures as opposed to spot contracts. Driscoll chimed in by commenting on how low the VIX was when news of the virus was circulating in China, so an investor with formidable foresight could have seen that opportunity. However, Driscoll’s firm was conservatively allocated before COVID—due to apprehension from other market signals—and he was surprised at how hard ETFs that had been labelled as safe/passive vehicles fell apart.

After all the panelists had offered their thoughts, Moberg detoured the conversation to the election. She asked the panelists if they believed investors were underestimating the volatility that the election will cause. Gambera quickly responded stating that the worst-case scenario and biggest tail-event would be a contested election, a course of action that has been suggested by one of the presidential candidates. Driscoll elaborated on Gambera’s point by laying out those scenarios he believed would be good for markets and those that would be bad. Specifically, he believes that a Democratic lead ahead of the mail-in counting would be good for markets because it would reduce the probability of a contested result. A worst case-scenario would be a big Republican lead that fades away as mail-in ballots are counted because that is most likely to lead to a contested result. Browne rounded out the response by stating that he is surprised more uncertainty isn’t being priced in to markets. He went on to list a few scenarios that he believed increase uncertainty due to their high probability of happening.

Following the election detour was a resumption of the COVID impact discussion. Moberg asked the panelists how their growth expectations had shifted in response to the pandemic. Browne started by saying he and his team have put a greater focus on investments’ “resiliency,” especially for private sector investments. The increased debt loads that companies are assuming demand a high-quality business model for survival. Further, these heightened debt levels will lead to a drag on economic growth. Gambera offered a different view by positing the pandemic through a mathematical lens. He directed listeners to think about economic growth as a perpetuity that can be discounted to derive a present value and described the pandemic as a shock that will not have a significant long-term impact on growth. Gambera called on a few examples of public health pandemics throughout history to support his claim. However, he also said that the aftershocks in the economy could be felt from capital impairment as a result of the pandemic—for example, a destruction of intellectual capital and productivity within the economy. Driscoll offered a similar view to Gambera’s, comparing the pandemic to a heart attack—it’s a massive setback but it has a clear road to recovery. He also pointed out that some asset classes, like real estate, will experience a greater negative impact than others because some leverage levels are not sustainable.

After hearing these mostly grim views, Moberg asked the panelists if they thought the pandemic would have a greater impact on the economy than the 2008 Financial Crisis. There was a general consensus that financial crises have been more damaging to economies throughout history, but there are few comparable eras to either the current environment or the 2008 crisis. Gambera then pointed out that it is difficult to tease out the direct impact of certain, comparable events from history.

Moving on from the topic of COVID, Moberg asked the panelists a more fundamental question—is there any connection between growth and the market anymore? Driscoll responded by saying that money is moving from fixed income to “growth” equities to make up for the poor opportunities in fixed income and, ideally, protect against inflation. This movement of money is causing a disconnect between the value of stocks and their cash flows. Browne built on this response by pointing to the influence that options contracts have had in driving up valuations. He also warned listeners that many investors are just focused on trying to find the next big tech stock, but everyone should be focusing on fundamentals.

Moberg followed up the discussion of growth with a question for Gambera about monetary policy. She asked if central banks have any more monetary policy tricks to use in this fragile environment. Gambera stated that austerity views have led to a narrowing of the function of fiscal policy, leading central banks to become the biggest bondholders in the world. He pointed out that few countries across the globe have been able to balance their government budgets but believes governments should “print more cash and get rid of these negative interest rate bonds.” He concluded his thoughts by saying that central banks have more tricks, but they are mostly untested, so fiscal policy would likely prove more effective. Moberg followed up by asking if the increased debt levels restrain the government or if debt levels can go up forever? Gambera stated that increasing debt levels is a bad optic, but it is hard to say how much debt is too much.

Moberg then pivoted the conversation to investors, asking how they should re-think markets and investing in the face of increased debt levels. Driscoll answered with a question for listeners to ponder—will the dollar ever be upset as the reserve currency of the world? He went on to explain that he has always transacted in dollars over the course of his career but believes there is potential for this to change. He also urged listeners to re-think investments in fixed income to get a real return. Moberg then directed the question to Browne asking for his perspective on alternative investments. Browne responded that alternatives are an intriguing and potentially well-performing asset class, but wanted to urge listeners to exercise skepticism, especially in situations where they think they know what will happen in markets. Browne then shared an example of how he has viewed the Fed’s monetary policy in the past and how he views it today. Gambera closed out the response by circling back to alternatives, stating that they might be able to provide higher returns but investment growth will be lower across the board in the face of higher debt levels.

Moberg asked one final question of Driscoll before proceeding to the Q&A. She asked if the recent outperformance of growth stocks means anything, to which Driscoll promptly responded that it poses a risk of valuation multiples compressing. He went on to say that, based on his and his team’s analysis, valuation multiples don’t seem to align with many investments’ fundamentals. Driscoll urged listeners to pay attention to the fundamentals and the business models of their investments, stating that a viable business model is the most important thing to own to ensure your investments’ resiliency. The presentation concluded with Q&A.

What can Illinois and the Federal Government do to help the pension crisis locally and nationwide?

Gambera stated that the math of the situation is unattractive and he believes that constitutional reform will be required to resolve the issue. Browne followed up by pointing out that without federal aid, pensioners will have to give up their rights and taxes will go up, negative outcomes that will be buffeted by Illinois’ decreasing population. Browne then called on Illinois and companies with pensions to “stop digging the hole deeper” as they try to resolve the situation. He also directed attendees to pay attention to politics because the outcome of this election season could play a significant role in alleviating pressure if Democrats gain control or accelerating pressure if Republicans retain control.

What valuation multiple is too high for big tech?

Driscoll opened the response by saying that there is no “magic number” for the whole industry, investors must look at multiples on a company-by-company basis. He gave high-level sample analyses of firms such as Microsoft and Apple and stated that he is always willing to pay a higher multiple for stocks of companies with higher gross margins. Browne echoed each of his messages in a follow-up response.