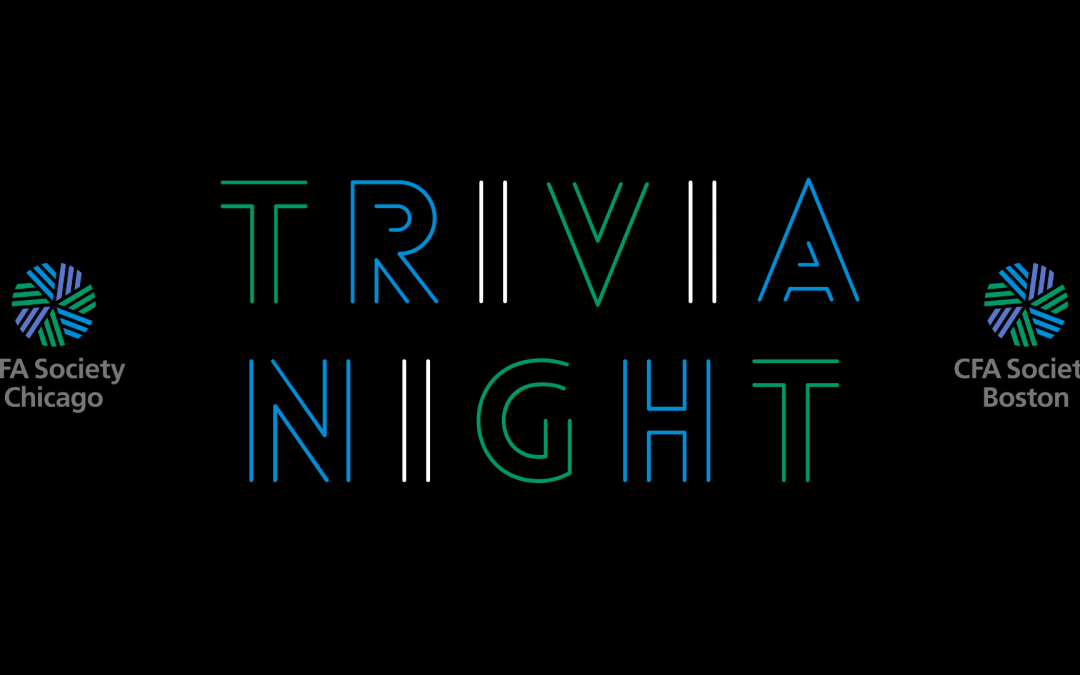 Fifteen members of the CFA Societies in Boston and Chicago gathered in virtual form on September 17, 2020, for the first ever joint trivia night. Hosted by the Social Events Advisory Group of CFA Society Chicago, the event was planned jointly by the staffs of the two societies. It was intended to be for networking and social mixing purposes, and not a competition between the two cities. It succeeded in that objective.

Participants were assigned at random to teams of three or four people and sent off into breakout rooms within the Zoom meeting to think over their answers to the questions. Questions came in two rounds of spread across four categories:

Sample question in the Boston vs Chicago category: What were the names of the curses that kept baseball teams from the two cities from winning the World Series for many decades?

Questions varied in degree of difficulty. This required teams to think carefully about how many points to wager on their answers because points were deducted for wrong answers. Some split questions had ease and difficulty within them. For example, one pop culture question asked for the names of two “iconic” situation comedy television programs set in the two cities during the 1980’s. Every team easily produced the Boston answer (Cheers!) but none came up with the correct answer for Chicago (Perfect Strangers).

Teams had ample time to discuss their answers in the breakout rooms, and also use some of their time for networking if they were able to agree on an answer quickly. As everyone was in “working from home” mode, quite a few family dogs made it into Zoom panes by the end of the contest.

At the end of the two rounds scores were close enough to leave the outcome up to an extra bonus question. In the bonus round, teams could bet as many of their accumulated points as desired in the manner of Final Jeopardy on the popular television game show. The question came from the Boston vs Chicago category and required detailed knowledge of the lyrics of songs from the musical groups named for the cities (not as easy as it might seem considering the lyrics weren’t set out in verse form nor set to music). A tie for first place resulted sending the event planners to the tiebreaker—the exact titles of the two songs—which determined the winner.

When concluded, everyone agreed the new event was a success, and ought to be repeated in the future. Although it worked very well in the form of a video conference, it could also succeed if held in person for an individual society, or a combination of the two formats to include multiple locations.