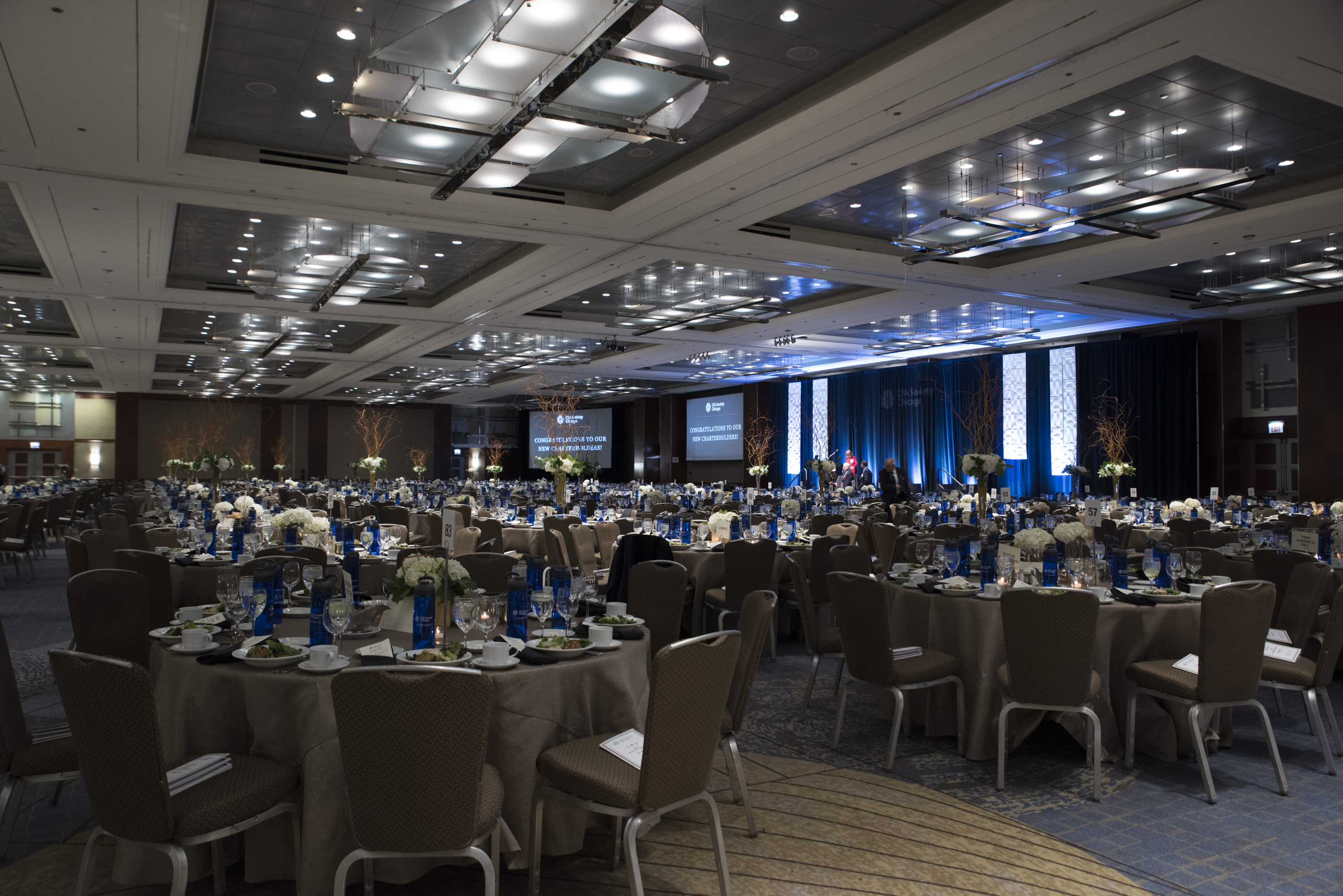 The Chicago Cubs didn’t win the World Series like they did during last year’s Annual Dinner but the 31st CFA Society Chicago Annual Dinner was yet another terrific evening honoring 163 new CFA charterholders and two recipients for the Hortense Friedman, CFA, Award for Excellence. We also had fantastic keynote speaker, David Rubenstein, founder of The Carlyle Group.

During the evening, our newest charterholders were acknowledged for making substantial investments in their careers by passing all three levels of the CFA exam as well as completing the four years of relevant work experience required.  Earning the CFA designation requires a significant investment of time, energy, and tenacity demanding for most nearly 1,000 hours of study.  The new charterholders are joining an exclusive club of investment professionals that possess both a high level of investment aptitude and a commitment to uphold the highest ethical standards. 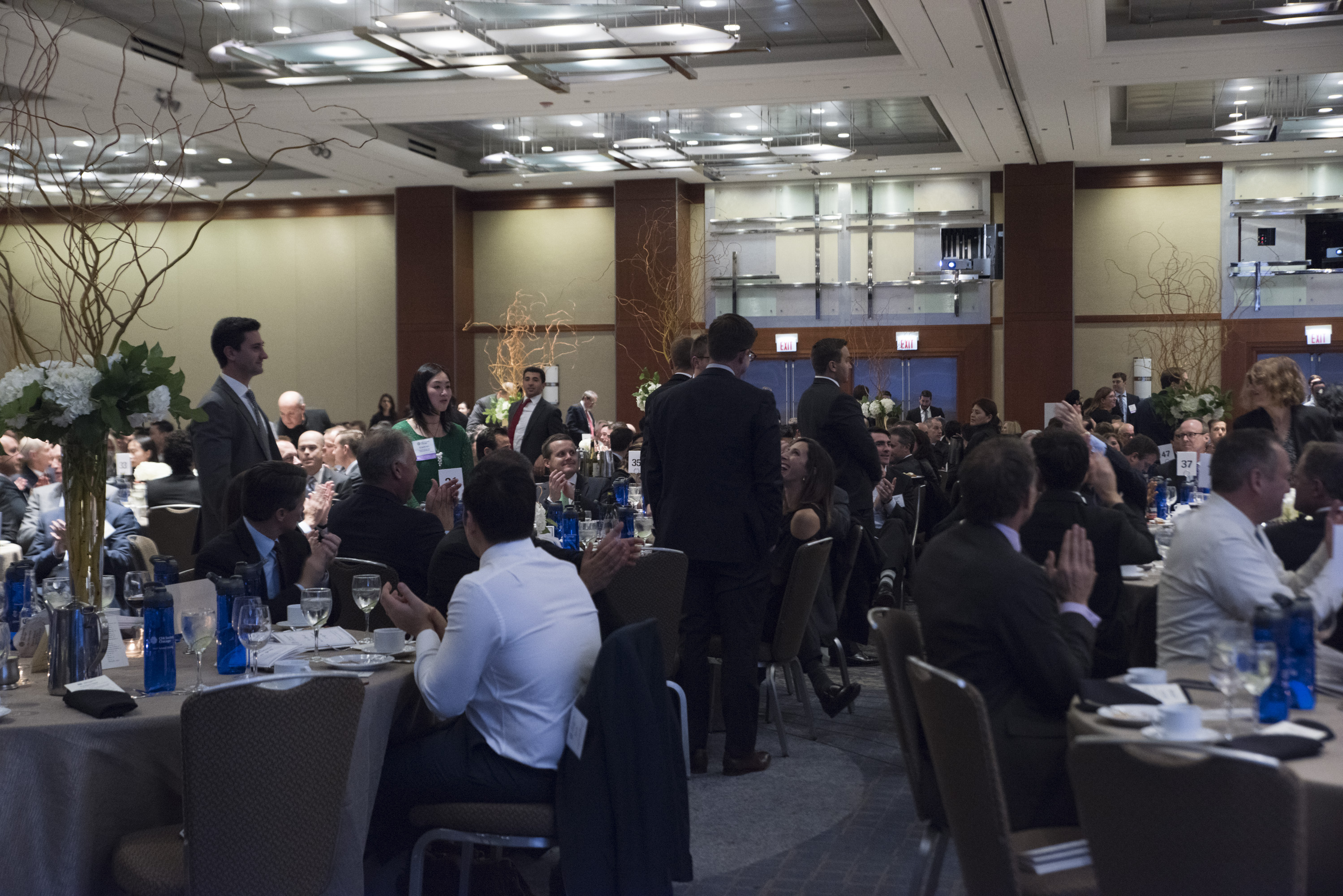 Congratulations to all the new charterholders! 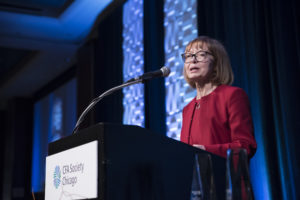 On behalf of the Society, congratulations to all those who met the rigorous requirements to become a CFA charterholder. After acknowledging the new charterholders, two individuals were honored for the Hortense Friedman, CFA, Award for Excellence.  This award is presented annually to individuals who have demonstrated initiative, leadership, and a commitment to professional excellence.

The first award recipient was Larry Lonis, CFA, who has worked in the industry since 1989, first for JP Morgan and more recently for Bank of America’s US Trust wealth management group where he served as the lead portfolio manager for a REIT equity strategy. Currently, he serves as the COO for the specialty asset management unit specializing in direct investments in oil and gas, farm, commercial real estate, timber, and private business assets.  In Larry’s speech, he was most thankful for being able to have a career where he is paid to learn every day as well as work alongside the incredibly bright people that he has had the opportunity to work.  As his father would always remind him, the most valuable asset each of us own is our name, which we must uphold to the highest standard along with the industry and the CFA designation. 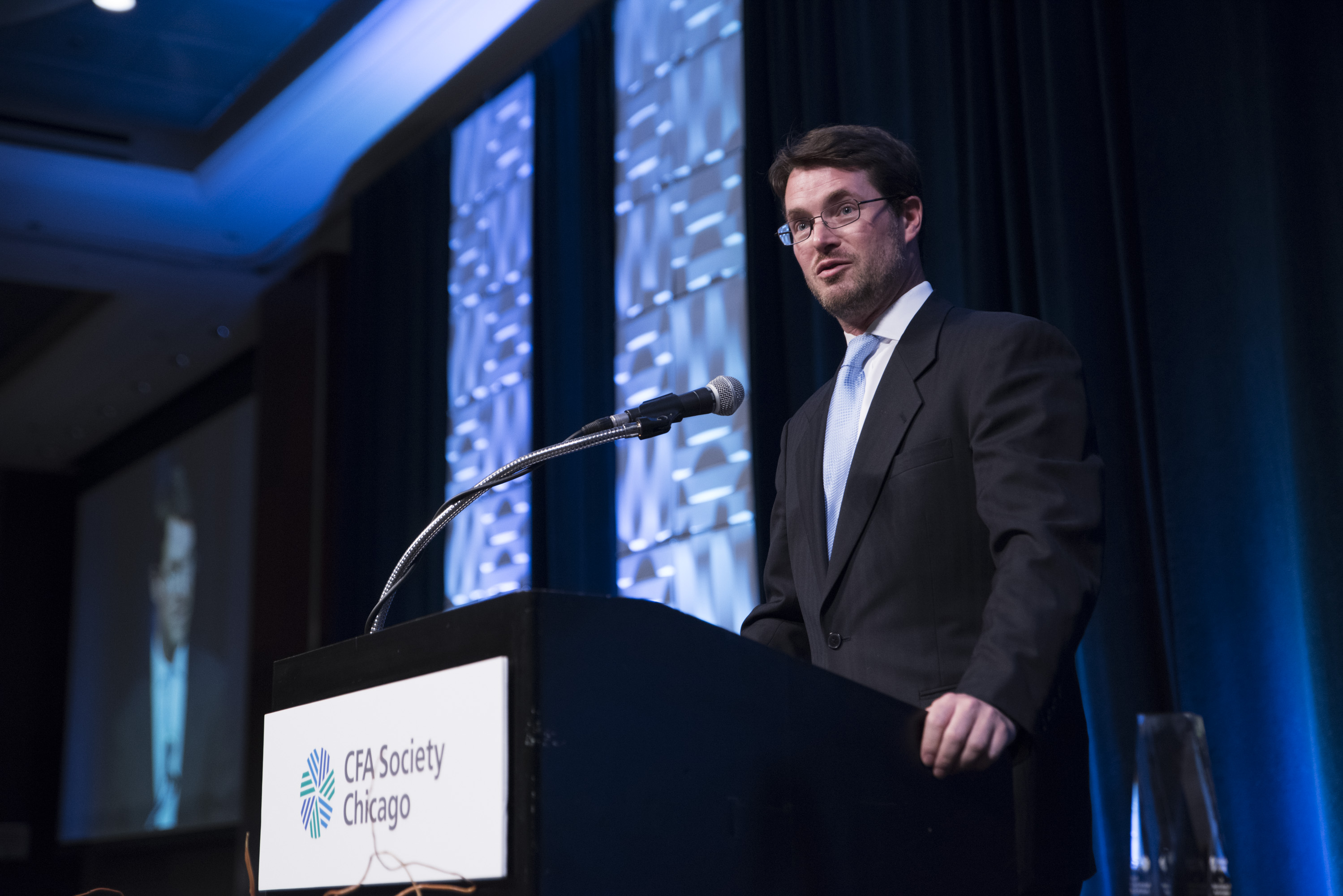 The second award went to Robert Harper, CFA, (posthumous) who grew up on the north side of Chicago, attended the University of Illinois where he studied Finance, and earned his MBA from Northwestern University.  He started his career at Stein Roe & Farnham where he became a senior analyst and Partner.  He later spent 22 years at Harris Associates, where he was the first director of research and the first institutional portfolio manager.  Mr. Harper was known for his contrarian views and was actively involved with the Investment Analysts Society of Chicago, known today as the CFA Society Chicago.

As the Friedman awards concluded, David Rubenstein took the stage and captivated the audience with a collection of videos of himself, including commercials, one in which he was running a young girls lemonade stand in which he suggesting bringing in LP’s and taking the company public or an outright sale through an LBO, in another video he was out-lifting bodybuilders in the weight room and another, showcasing his rapping ability while promoting his firm, The Carlyle Group.  After several laughs, Mr. Rubenstein talked about how he started his private equity firm, The Carlyle Group, which led to a review of how his success at Carlyle lead him to contribute philanthropically to our society, and finally a list of predictions for the economy over the next 12-18 months. 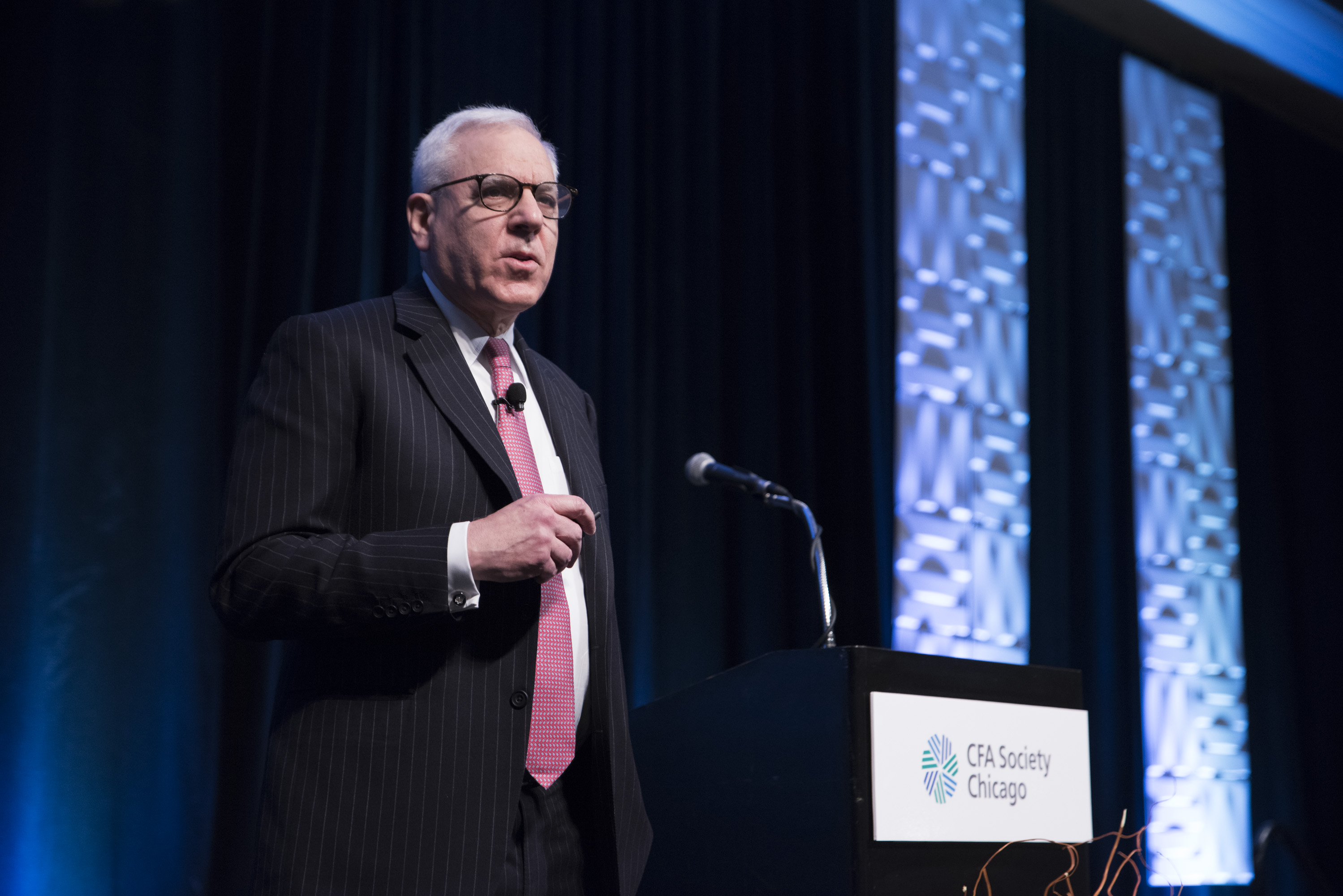 Rubenstein grew up in Baltimore, the son of a blue collar Jewish family whose father worked at the post office and never made more than $7,000/year.  In hindsight, it was a great advantage to have the unconditional love of two parents that didn’t have a lot of wealth – you know you’re going to have to do something on your own to create your own success.  Rubenstein attended Duke, where his initial calling was into politics after being captivated by John F. Kennedy’s first inaugural address given on January 20th, 1961.  This is the speech when JFK famously said, “Ask not what your country can do for you, but what you can do for your country.”  Continuing with his passion for politics, Rubenstein subsequently pursued law school at the University of Chicago where he graduated from in 1973.  After law school, he went to work for the man who wrote JFK’s speech, Ted Sorensen, who saw Rubenstein was interested in politics, but that he didn’t have the skills to be a terrific lawyer.  From there, he worked as chief council for Birch Bayh, a former US Senator from Indiana, who dropped out of a political race 30 days after David joined leaving him without a job.  Rubenstein then found a job working for Jimmy Carter at a time when Carter was a 33 point favorite to beat our Gerald Ford.  President Carter later won by only one point.  One of Rubenstein’s jobs while working for President Carter was to fight inflation, and if you remember back to this time inflation rose as high as 19%!  Quite the contrast from several economists today more worried about about deflation in today’s environment.  President Carter later ran against a much older Ronald Reagan and lost, putting Rubenstein yet again out of a job.  Without your party in power in Washington, it’s safe to say it’s very hard to find a job.  “If you want a friend in Washington, go buy a dog.” 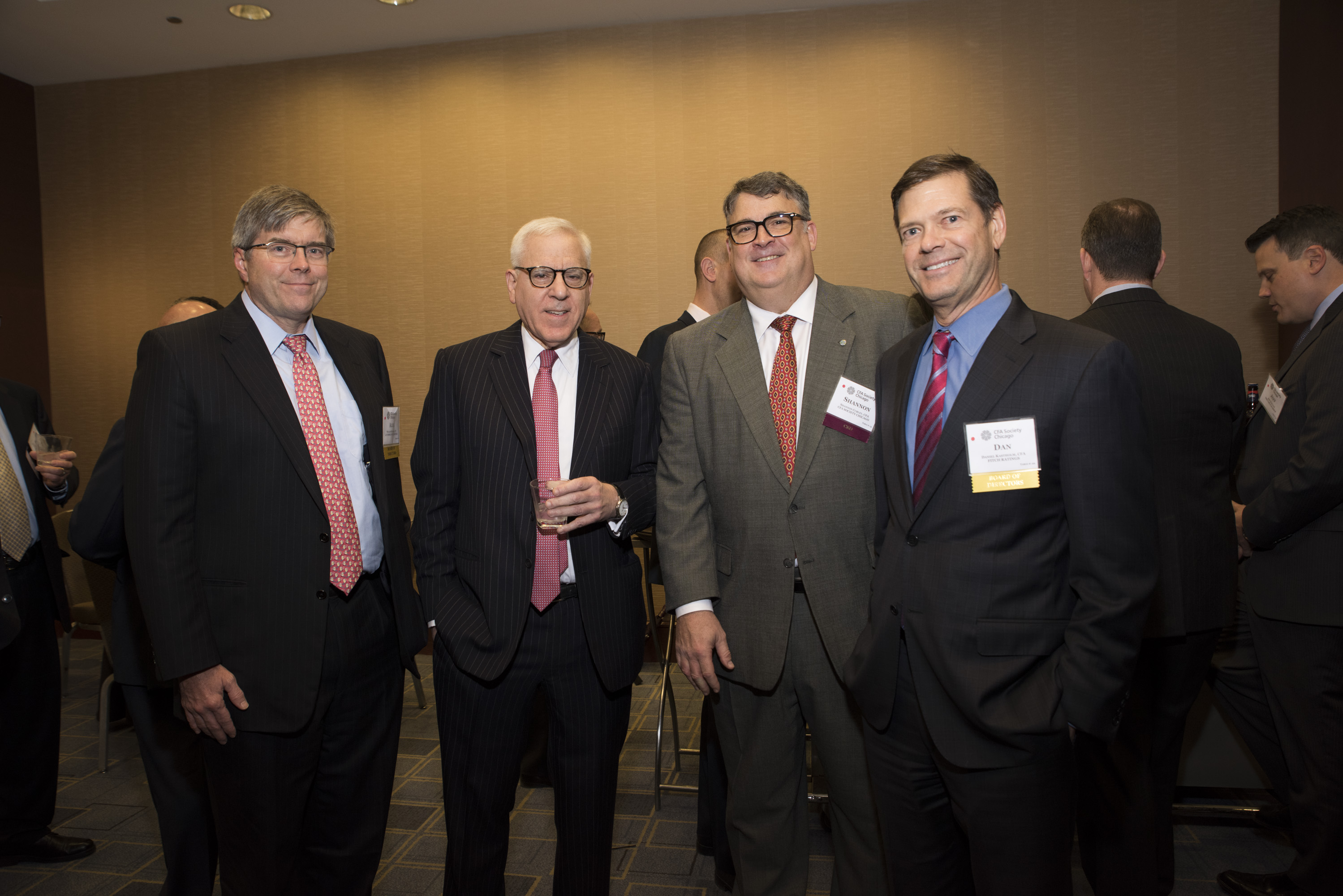 Reconsidering his path in politics, Rubenstein read a blurb in the newspaper that changed his life.  The article highlighted Bill Simon whom started an investment firm which performed a “leveraged buyout” in which it bought Gibson’s Greeting Cards from RCA for $1 million and made $80mm in two-and a half year period.  He had the ambition and entrepreneurial spirit to start the first private equity firm in Washington DC and recruited the CFO of MCI and an executive from Marriott to be his partners.  They named their firm “The Carlyle Group” after a hotel in New York, for which ironically none of them had ever stayed.  The first four investors in their fund collectively contributed $5 million, or $1.25 million each.  The first deal was Chi Chi’s, a fast food Mexican food company that was looking to go private after being a public company.  The investment turned out successfully and today Carlyle Group has grown to one of the largest private equity firms in the world.  Rubenstein attributes the tremendous success to the creation of numerous styles of funds: a small buyout fund, a growth fund, a mezzanine fund, a debt fund, an institutional fund, and last but not least a family of funds among others.  He and his partners then took this idea of a multi-faceted fund structure and globalized it.

At 54 years old, Rubenstein came across a second newspaper article that also had a significant impact on his life.  This time it was an article of the wealthiest men in the world according to Forbes magazine, where he was featured for creating a very large fortune.  After living two-thirds of his actuarial life, Rubenstein signed a pledge to give away nearly all of his net worth—donating his fortune to educational institutions, medical research firms, and volunteering his time by serving as Chairman of Kennedy Center, Lincoln Center, and The Smithsonian.  A few years later, a THIRD article changed his life, this time coming in the form of an advertisement.  Flying home from London to New York, he read an invitation that an official copy of the Magna Carta was being auctioned off, of which there are currently 17 copies of around the world.  Ross Perot had bought one in 1981 and had since decided to sell it.  Rubenstein prevailed in the auction and has now donated it to the United States National Archives.  He continued purchasing historical documents that had significant to our country’s founding including the Declaration of Independence, the Emancipation Proclamation, the Thirteenth Amendment of the Constitution, rare copies of the constitution, and the first map of the United States.  After acquiring these meaningful documents, he has put them in places where Americans can see them so Americans can be inspired to learn more about the history of our country.

Rubenstein left us with quick yet informative bullets on his forecast for the economy and private equity industry:

Concluding on Rubenstein’s philanthropic effort, he left us with “If you can make your mother proud, that’s where you’ll find real happiness is in life.”  For all the great deals that Carlyle had done and even after going public, he never received a congratulatory call from his mother.  He did however receive a call every time he donated his money and time to a worthy cause.  Even though many of us in the room won’t have the wealth that Rubenstein has created, you can still dedicate your time and skills to help make the world a better place.  Go out there and “Do something that will make your mother proud!” 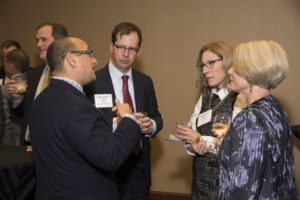 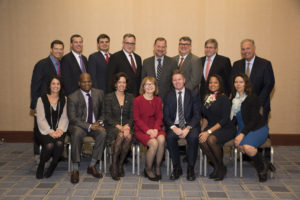 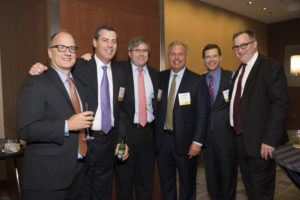 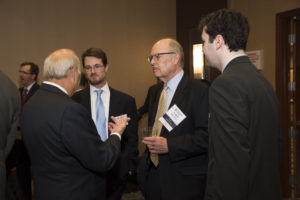 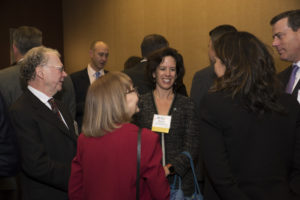 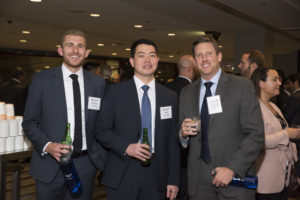 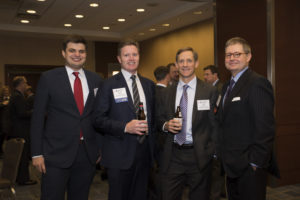 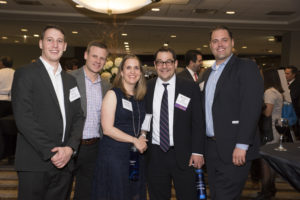 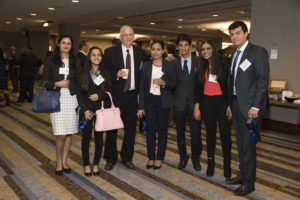 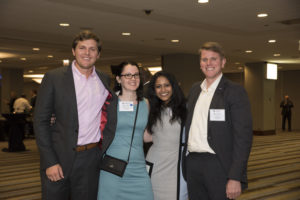 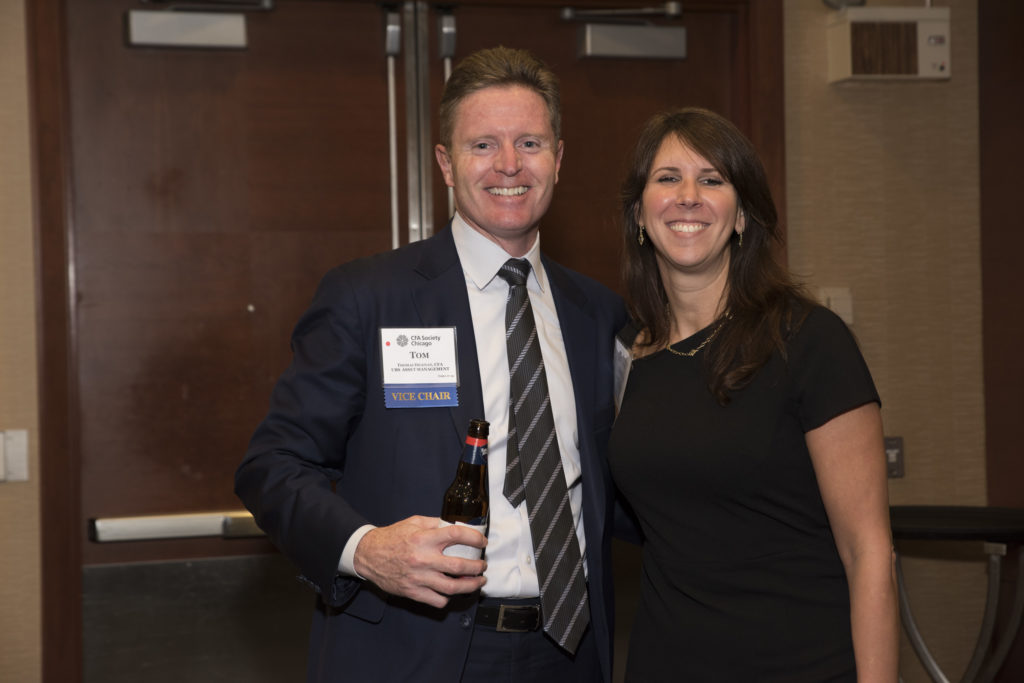 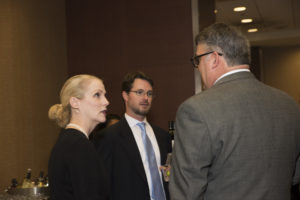 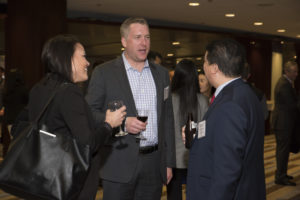 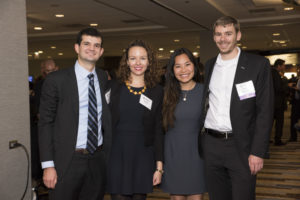 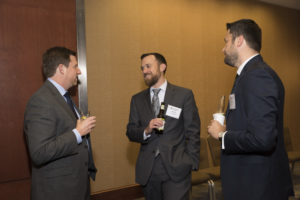 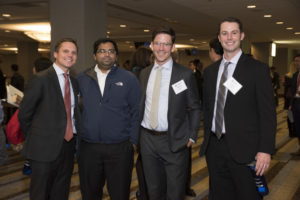 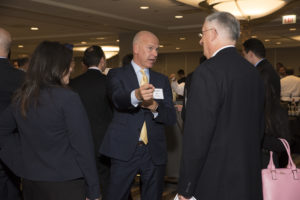 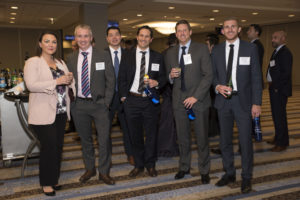 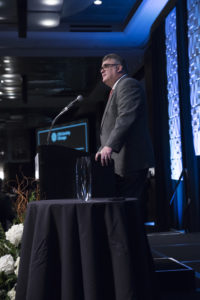 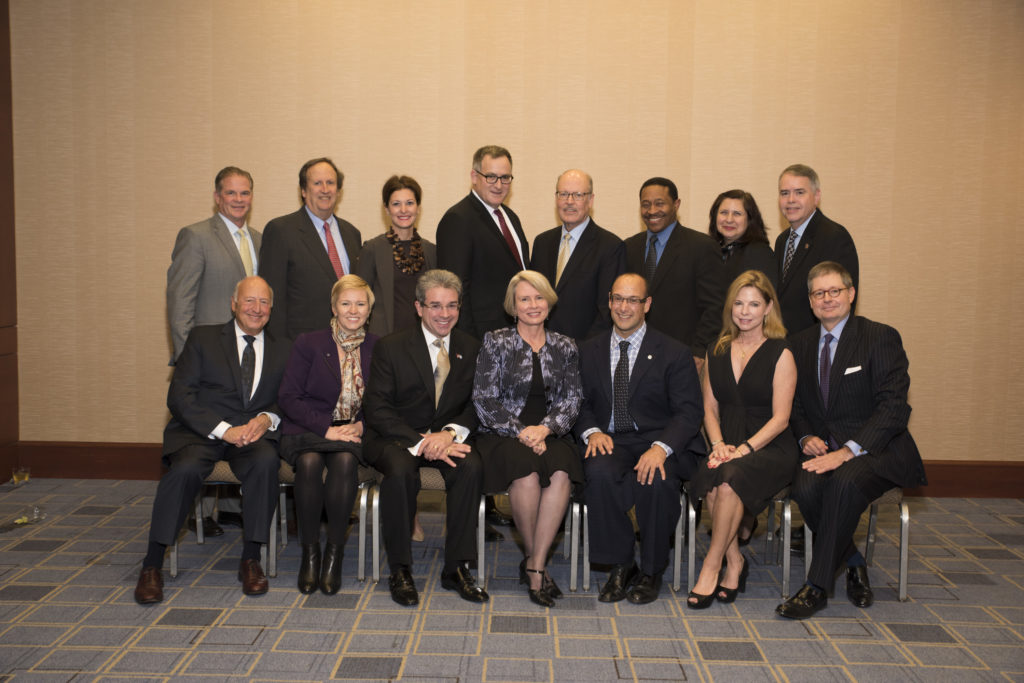