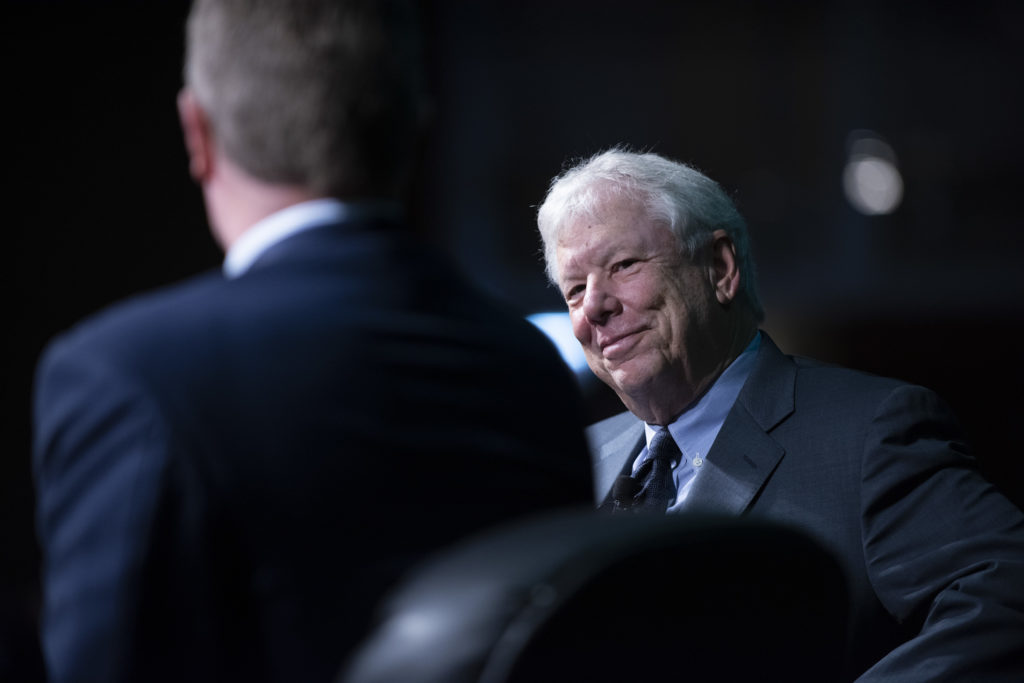 The CFA Society Chicago Annual Dinner was an event devoted to honoring the 148 new CFA charterholders and the recipient of the Hortense Friedman, CFA, Award for Excellence.  The evening also featured Heather Brilliant, CFA, past chairman of CFA Society Chicago and Keynote Speaker Richard H. Thaler, 2017 Recipient of the Nobel Memorial Prize in Economic Sciences and the Charles R. Walgreen Distinguished Service Professor of Behavioral Science and Economics at the University of Chicago Booth School of Business.

The newest charterholders were congratulated for passing all three levels of the CFA exam, and having the required four years of relevant work experience required to qualify for the charter.  Honoring their commitment to completing the program, a crowd of 1,050 attendees gave them a standing ovation. It is estimated that preparation for the exams requires nearly 1,000 hours of study. The newest charterholders now hold a professional designation that is recognized worldwide as a symbol of excellence in their profession and a commitment to uphold the highest ethical standards.

Heather Brilliant, CFA is currently vice-chair of the CFA Institute Board of Governors and a managing director at First State Investments.  She addressed the “State of Disruption” in the financial services industry.  Brilliant identified two disruptors: the rise of passive investing and the increasing influence of technology.  She viewed both as positive developments that will in the long-term serve client interests.

The changes these disruptors cause will need to be harnessed by CFA’s.  Active managers will face more consolidation and robo-advice will be more prevalent.  However, it is difficult for machines to empathize with clients.  Brilliant stated that the CFA Institute will offer more continuing educations support and continue to advocate for fiduciary duty.

Brian Singer, CFA was honored as recipient of the Hortense Friedman, CFA, Award for Excellence.  The award honors a member of the Chicago-area investment community who has demonstrated initiative, leadership and a commitment to professional excellence. Singer is the head of William Blair’s Dynamic Allocation Strategies team, as well as its lead portfolio manager.  In expressing his thanks for the reward, Singer spoke of the great experiences he had earlier in his career in working with Gary Brinson and Gilbert Beebower.  They collaborated on a seminal article published in 1991 entitled: Determinants of Portfolio Performance II: An Update.

The keynote speech took the form of a question and answer session between Richard Thaler and Thomas Digenan, CFA, chairman of CFA Society Chicago. The questions from Digenan covered a wide variety of topics and took advantage of Professor Thaler’s expertise in decision theory.  The Q & A unfolded as follows:

Guess a Number between 0 and 100
The number guessed must be the closest to two-thirds of the average guess of people attending this meeting. After some calculations, you arrive at a mean of 25.4, two-thirds of that mean is 16.93. Professor Thaler made an initial guess of 17 without having to go through the calculations. He was hopeful that charterholders would arrive at a number close to the correct answer.

Outlook for the Chicago Bears
Professor Thaler states the due to the NFL salary cap; successful team must have players that perform at a level greater than their salary. This favors teams with good draft picks and teams that find good players that other teams don’t want. The Bears were forced to pay defensive lineman Khalil Mack a market value salary for the next four years. This acquisition does not bode well for the Chicago Bears as Mr. Mack must be highly compensated.

Lottery Ticket Purchase?
Given the $1.6 billion payout, Professor Thaler would have purchased a ticket. He called it a “smart dream”. Interestingly, of 14 people asked to sell their machine number generated $2 ticket for $4, 11 would not do so. Once you have something, you don’t want to give it up.

Health Care Options for Employees and the Role of “Nudge”
Employees routinely make bad decisions with respect to which health care plan is best for them. These decisions include paying $2,800 for reducing your deductible by only $2,000. Professor Thaler characterized the desire to go to a smaller deductible as a “negative nudge”. He co-authored the global best-seller “Nudge” in 2008.

During open enrollment, there is no action required if you want to keep the same plan as the year before, however if you want to change you are forced start over (go to zero). This leads to what he termed “status quo bias”. Few employees understand their health care options, which can be a bigger decision than what type of 401K you have.

An Example of “Sludge”
People who sell things need to nudge. Bernie Madoff nudged, however he nudged people for evil. It must always be our intention to “nudge for good”.
When trying to access a review in a British journal, Professor Thaler ran into a paywall. The paywall asked for only one pound of payment to access the article; however he was required to give them his credit card. After an initial period you were automatically renewed at the market rate. To stop the subscription, you were required to give 2-weeks’ notice via telephone. This is a prime example of what Professor Thaler views as “Sludge” (making it difficult to get out)

What is Life Like after Winning a Nobel Prize?
Professor Thaler has noted that he has encountered more “Sludge”. He is the third recipient of the Nobel Prize on the floor he works on at the University of Chicago, so after about a week everything returned to normal.

Thoughts on “Surge Pricing”?
Professor Thaler warned that surge pricing can be a huge blunder. This is especially true when it becomes too prevalent. Most customers are resentful when a hardware store raises the price of snow shovels during a snowstorm. During a snow storm in New York, Uber commenced surge pricing. He noted that Home Depot does not raise the price of plywood after a hurricane. Home Depot, by not implementing surge pricing, is promoting a long-term relationship with their customers.

How do you guard against over-confidence?
It is important to eliminate hindsight bias. You must distinguish between bad decisions and bad outcomes. In a football analogy, Professor Thaler stated that attempting to score a touchdown on fourth down with one yard to go for a touchdown early in a football game is a smart decision. If you are not successful, you give the ball over with no points scored. However this is not a case of overconfidence by the head coach. This is an example of good decision with a bad outcome. It is difficult to do, however it is better to evaluate the decision, not the outcome.

In his concluding remarks, Professor Thaler criticized point forecasts by analysts and advocated confidence limits. A $2.34 point forecast can be contained in $2.15-$2.50 confidence limit. It is also critical to be able to look back at forecasts to track errors. Forecasting is an important part of what people do and the more feedback you have the more you will learn.

CFA Society Chicago would like to thank the following organizations for helping to make the 2018 Annual Dinner a success!

Thank you to all our Gold, Silver and Bronze sponsors as well!