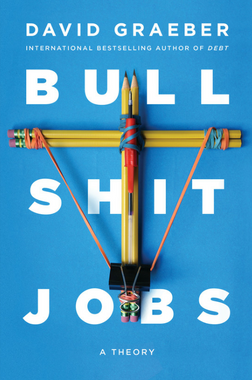 We’ve all had jobs that at times felt unnecessary, redundant, or even harmful.  David Graeber’s Bullshit Jobs (2018) provides numerous examples of such jobs such as “flunkies” who exist only to make others feel important and whose examples include some receptionists and chiefs of staff, “goons” who exist only to aggressively manipulate and whose examples include several public relations and marketing functions, “duct tapers” who exist to fix defective or inferior processes or work produced by others, “box tickers” who exist only so that organizations can claim that they’re doing work that they are not and whose examples include many compliance functions, and finally “taskmasters” who exist only to create unnecessary work for the previous BS job types and then to ensure that it is (or isn’t) completed.  There’s little controversy in claiming that those jobs exist and are often unnecessary or even harmful, but Graeber takes it a step farther by arguing that the political-capitalist class conspires to create and maintain these jobs to pacify the masses rather than re-distributing wealth more equitably and thereby freeing people to pursue their passions.

Graeber’s argument suffers from the fatal flaw that John Hulsman terms “the promised land fallacy” in his 2018 book To Dare More Boldly: The Audacious Story of Political Risk.  That fallacy describes the human tendency to seek over-arching single theories to explain complex phenomenon.  Compounding the damage is Graeber’s scant empirical support for his argument, save the unscientific collection of blog comments and email responses to his previous article on the same topic, his lack of policy responses to the problem except for a brief discussion of a Universal Basic Income (UBI), a solution with little political or empirical support, and in the fact that the one “promised land” explanation that he chose to go with is largely untestable and ignores myriad simpler and more mundane explanations, two of which I’ll highlight below.

The first explanation has particular relevance to the “flunkie” class in Graeber’s taxonomy of BS Jobs.  Fredrick Brooks Jr.’s The Mythical Man-Month (1995) is about computer programmers but the lessons apply to diverse professions.  The genesis of the book was the observation that top computer programmers were orders of magnitude more efficient than marginal, average, or even above average programmers.  What’s more, programming often isn’t amenable to multiple programmers because of the inter-relatedness of the parts, and communication between multiple programmers adds time both for the act itself and in the training so that it can be done effectively.  The question then becomes: does a firm hire several programmers of varying quality and then try to integrate their work of varying quality—or should firms focus on hiring the best programmers and then hire support staff to make those fewer programmers as efficient and productive as possible?  The book justifiably argues for the latter, and the concept can be scaled to any profession that has the following attributes: (1) the task can’t be easily divided, such as in trading, surgery, or being a nuclear submarine captain, (2) the consequences of sub-optimal performance are high, and (3) the overall need for the task is limited.  When those conditions are met, it makes the most sense for firms focus on hiring the best performers for the primary task and then focusing the remaining workers on making those workers performing the primary task as efficient as possible.  Picking up dry cleaning, replying to email, and keeping the mint bowl full aren’t necessarily glamourous roles, but they’re not the result of a bourgeoisie conspiracy either.

The second low-hanging fruit explanation for many of the phenomenon that Graeber describes, particularly those of what he terms the “box ticker” type of BS job, is what Nobel Prize winner Herbert Simon termed “the logic of consequences” and the “logic of appropriateness,” which has been used to explain numerous sub-optimal behaviors in complex organizations and even some of the events of the Cuban Missile Crisis (Graham Allison and Philip Zelikow, Essence of Decision [1999]).  Organizations are created to perform one or more tasks.  Processes are created to perform those tasks, including interim processes to ensure those tasks are completed and to measure the degree to which those processes are or aren’t being completed satisfactorily.  Over time, those interim processes become divorced from the primary processes that they were created to help facilitate and even become the object of firms efforts, hence performance measurement and compensation schemes that measure and reward performance based on  how many reports are completed versus whatever it is that the employee and the firm are ostensibly trying to accomplish.

Smaller and less complex firms are less susceptible to the logic of appropriateness.  Management consultants–another BS Job, according to Graeber–can also be useful in identifying outmoded processes or those that have otherwise become divorced from their original purpose.  Another solution is temporary organizations that sunset after whatever they were created to accomplish is accomplished. President Ronald Reagan said that a government program is the closest thing to perpetual life on this side of heaven.  Examples abound, including the Tennessee Valley Authority (TVA), an organization created to accomplish the long-since resolved task of electrifying the Tennessee Valley, which is approaching its centennial.  The corporation is a relatively modern form of organization.  Early corporations were most often created for a single purpose, such as building a canal, and were sunsetted after the project was completed.  Deviations from a firm’s original purpose required shareholder approval.  The modern perpetual corporation, such as the industrial conglomerate GE that transformed into a financial services firm, dabbled in television, and then came to its senses and got back to manufacturing were not possible.  Given GE stock’s recent performance and demotion from its place on the Dow Jones Index, the market seems sufficient to discipline such economic misadventurism.  The same, unfortunately, can’t be said for the TVA.

Perhaps Graeber fails more simply in that he sees lives half-unfulfilled rather than the other way around.  To paraphrase Sir Winston Churchill’s description of democracy, capitalism is the worst economic system that’s ever been created—except for all the other ones that’ve been tried.  The world has done at least three controlled experiments to determine the relative efficacy of market economies versus centrally planned ones by dividing countries in two and making one economy market-based and the other centrally planned: (1) Hong Kong and the Chinese mainland, (2) East and West Germany, and (3) North and South Korea.  Graeber makes the outlandish claim that the Soviet Union’s centrally-planned economy failed “because they were never able to develop computer technology efficient enough to coordinate such large amounts of data automatically.”  Now that computing power isn’t an issue, I wonder what Graeber’s excuse for North Korea is.  Those economies aren’t immune to BS jobs either.  The Soviet Union spawned the king of all BS jobs, waiting in lines on behalf of others.  It was one of the few black market jobs to earn extra cash in the Soviet Union and given the massive shortages of everything there were ample opportunities to ply the trade.

Graeber succeeds briefly in entertaining the reader with examples of BS jobs–most of which those of us who’ve had to earn a living are already familiar with—but in terms of identifying the causes and providing solutions he falls miserably short.