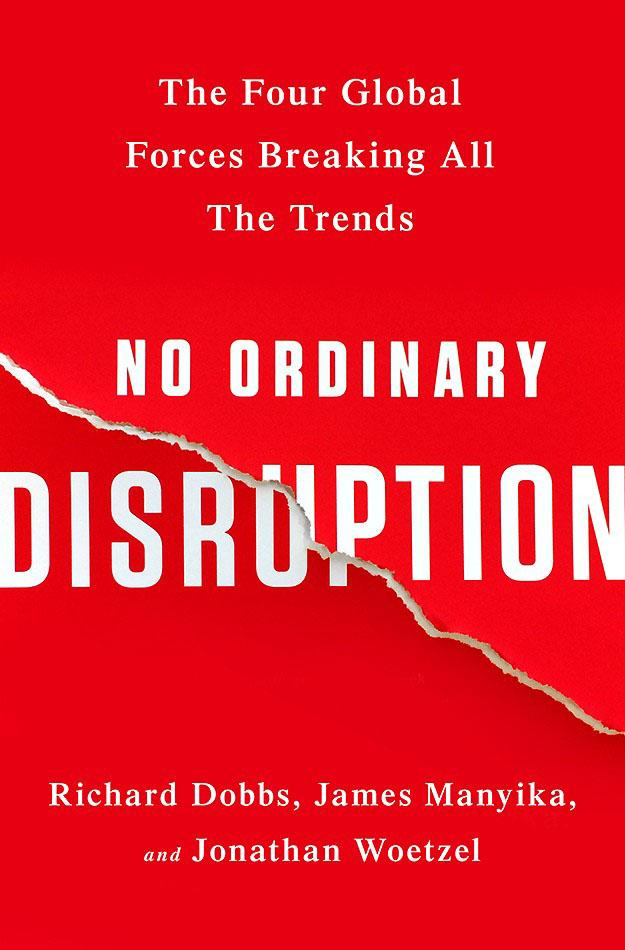 Everything can be measured, and what gets measured gets managed.” So reads the motto of one of the world’s most pre-eminent consultancies, McKinsey & Co. This month’s CFA Society Chicago Book Club Selection, No Ordinary Disruption: The Four Global Forces Breaking All of the Trends, is written by three men from McKinsey and they truly take this tagline to heart. The “four global forces” in the title include: urbanization, the challenges of changing demography, technological advance and acceleration, and growing interconnectedness of the global economy. Major news outlets have focused on these forces in some form or another for many years (or perhaps decades), but the main value that this book brings is its focus on anecdotes and “measurements.”

The first half of the book focuses on the forces themselves and where we find evidence of their existence. The center of global economic growth has been moving east for some time and many Chinese and Indians (among others) find themselves commanding a larger standard of living. Meanwhile, “The West” has been fraught with stagnation and labor’s replacement with capital in many industries due to technological advances. Furthermore, the demography of many developed nations has produced more retirees per working person. Each of these facets is well laid out with stories of real life examples in the development of smarter and less expensive robots, the crises affecting aging developed economies, and the rise of emerging markets.

The second half of the book begins to falter a bit with the prescription on what to do about the changes coming. Almost every single course of action recommended would be common in MBA programs or even undergraduate studies of business. Employers and companies are encouraged to adapt to this new environment we find ourselves on the brink of.  Which skills will be necessary aren’t named specifically, but the emphasis is really on the ability to change. This reflects the true challenge going forward in managing that which is measured.

Overall, the book provided for a great discussion on what the future will look like and how it affects the investment profession. Even though its prescriptions weren’t always insightful or groundbreaking, the idea of a different economy and investment environment can be both frightening and exciting. We will continue to watch these factors to see where they take us going forward.