CFA Society Chicago Book Club: The Accidental Superpower: The Next Generation of American Preeminence and the Coming Global Disorder by Peter Zeihan 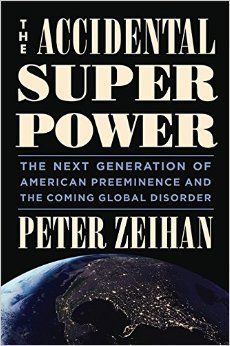 Geography is destiny.  Demography is second.  Everything else is a distant third.  That’s the takeaway from Peter Zeihan’s The Accidental Superpower: The Next Generation of American Preeminence and the Coming Global Disorder, which was the book of the month for the CFA Society Chicago’s Book Club in January 2017.  From settling the Nile Valley to deep water navigation and the shale oil revolution, Mr. Zeihan explains how geography influences almost every aspect of civilization from formation to eventual demise.  Landlocked countries tend not to have navies of any consequence.  Countries with neighboring threats tend not to have excess resources to project military power beyond their borders.  Countries lacking internal resources are more likely to engage in trade.  The fact that the US is facing two oceans and has no neighboring threats coupled with its need to secure energy and goods explains how she can—and has—projected her power abroad for decades in part to secure global trade.  The shale revolution and ample food supplies coupled with the rising costs of extra-continental labor and domestic supply chain alternatives such as 3D printing explain why she might no longer need or care to.  The conclusion is that a newly self-sufficient and relatively young US will withdraw from participating in global trade and security while the rest of the world collapses under the weight of its aging populations and competition for scarce food and energy.  How’d we get here?

To answer that question, rewind to the beginning of the book, which starts at the end of World War II, the most destructive war in human history, and the agreement that helped in part to ensure that it never happened again, the Bretton Woods Agreement, signed by 44 countries at the Mount Washington Hotel in Bretton Woods, New Hampshire.  In addition to the consequences of that momentous agreement, we learn that its namesake town and the Hotel at which it was signed were so overwhelmed the 730 delegates that descended upon it that the Hotel’s manager locked himself in his office with a case of whiskey at one point during the gathering and refused to come out.  Those anecdotes along with Mr. Zeihan’s wry sense of humor alone made the book well worth reading.  The Agreement’s consequences were threefold: (1) all the signatories’ currencies were to be freely convertible into US dollars at a fixed rate, and the US dollar was likewise to be exchangeable for gold at a fixed rate, (2) the US would protect maritime shipping, and (3) the signatories would be part of a “strategic umbrella” of protection against the common Soviet threat.

Just as geography had ordained that the WWII belligerents compete militarily to secure markets, resources, and shipping, the Bretton Woods Agreement with the stroke of a pen ensured that they would no longer need to.  Being freshly ravaged by war and facing a common Soviet threat further ensured their assentation to the agreement.  In addition to Bretton Woods, there was one more ingredient in the elixir that spawned the post-war boom: demography.  The signatories boasted youthful populations.  Few variables in economics are known with near certainty for any extended period of time.  Demographic variables are an exception.  At any given time in any given country, one can tell with reasonable certainty how many skilled young workers will be entering the workforce.  Skilled workers don’t magically fall from the sky ready to leave home and acquire gainful employment, as much as their parents may wish it. There is a pipeline from birth to school to adulthood.  Once in the workforce, laborers again follow a predictable life cycle. As they begin working, they begin paying taxes and saving.  As their savings grow, they deploy their savings into capital markets until they finally retire, spend down their savings, and increasingly rely on the next generation of tax payers for their welfare.  Here again the US, while still aging, is relatively young and demographically well positioned relative to the rest of the World, Mr. Zeihan argues.

The book club members welcomed Mr. Zeihan’s geographic and demographic analysis as a compliment to traditional economic and financial modes of analysis. The members did, however, cast doubt on some of his conclusions and predictions.  The first was the premise and title of the book, Accidental Superpower.  One member noted that the Founders were quite deliberate in their desires to build the US into a military and economic superpower, the subject of a recent popular musical.  No one gave serious credence to Mr. Zeihan’s prediction that Alberta, Canada, might become the 51st state.  If Mr. Zeihan had cast a critical eye towards the US and applied some of the same analysis that he applied to the rest of the world, he might have found similar fissures.  Many Western and Southern US States are net beneficiaries of federal aid and lament the federal government’s intrusions in their lives.  If armed standoffs like 2014 one with Amon Bundy in Nevada become more commonplace, it’s at least as plausible as some of Mr. Zeihan’s other claims that net-contributor states might leave those states to fend for themselves.  More importantly, Mr. Zeihan’s arguments about geography and physical capital didn’t seem as relevant to the Members as the author claimed them to be in the internet age, and one certainly doesn’t have to be a naval power to wreak havoc in the cyberwar era, as the US again learned in the 2016 election of Mr. Trump as President.

Alberta, Canada, might indeed become the 51st and prove the Club Members wrong, and even with its other potential omissions and shortcomings, Accidental Superpower was an eminently enjoyable and worthwhile read.