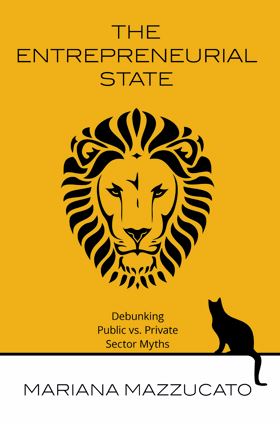 Around the time we read this book, a major global growth scare was negatively impacting the financial markets.  Examples were the China slowdown which weakened emerging market exports, Japan’s ability to stimulate demand after two lost decades, and the low inflation and growth coming out of Europe.  Growth is known to be export or investment led, but a traditional catalyst has historically been technological led innovation.  Looking at Europe over the past decade, there has been a lingering question as to why Europe has not been a major innovator.  Why has the US been a major leader in technological innovation producing companies like Google or Apple?  Where are the Silicon Valley’s of Europe?  Is it possible that government led European austerity could be a major contributor to stagnant growth?  The author thinks yes.

Austerity programs in Europe have led to reduced government spending and an expectation that the private sector is going to lead the way in innovation.  Looking at the US, and despite popular opinion, the high risk and innovative catalysts for growth have not come from venture capitalists or the private sector.  It has been the State.  Against popular myth, the State doesn’t just invest in infrastructure, correct market failures, take part in countercyclical Keynesian fiscal policies, or create the right economic conditions for the private sector.  The State has actually been extremely entrepreneurial and has led the way in nanotechnology, the internet, GPS, touch screen display, SIRI, green technologies, and biotech among other things.  The State is not at the back end of innovation but at the forefront.  The issue with the private sector is that they are quite focused on short-term profits and an eventual exit strategy which has put downward pressure on the time horizon resulting in shorter term 3-5yr projects rather than the high risk and highly uncertain 15 year projects which have produced the major growth catalysts such as the internet.  While 9 out of 10 high risk investments will fail, it takes just the 1 to more than offset the other 9 failures.  While that 1 positive outlier has handsomely rewarded and offset the unprofitable investments for venture capitalists, the reward to the State has come in the form of indirect taxation revenue which has been only a fraction of the total high risk investment return and has certainly not compensated for the high risk of these uncertain long term investments.  For more State run innovation led growth to continue, we need to find a way for the high risks to be rewarded without only the fractional indirect return of taxation.

The bottom line is that high levels of government austerity can significantly curb long term innovation and growth.  Especially considering that economies can’t rely on the private sector to invest in the high risk and uncertain areas that can be the major turning points or catalysts for growth.  If the State could have a much greater combined direct and indirect return on their investments, then perhaps the State would have a much greater pool of assets to invest towards high risk investments which could accelerate long term growth.

March 15, 2016: My Side of the Street: Why Wolves, Flash Boys, Quants, and Masters of the Universe Don’t Represent the Real Wall Street by Jason DeSena Trennert