CFA Society Chicago Book Club: The Gray Rhino: How to Recognize and Act on the Obvious Dangers We Ignore by Michele Wucker 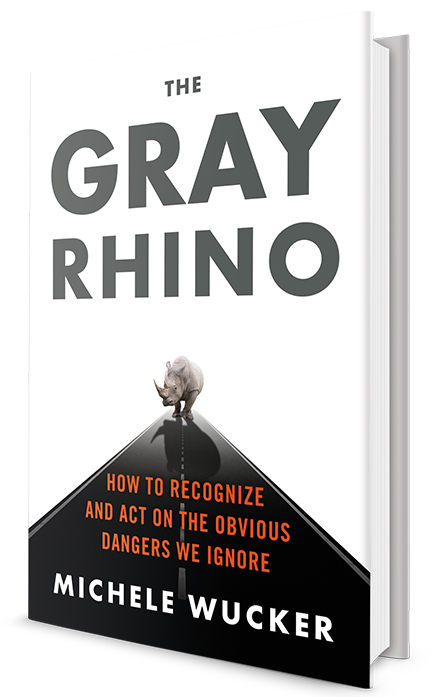 Overlooking or underestimating obvious dangers is a timeless tradition. A man is terrified of planes but gets in his car every day and drives with no seat belt. A woman pays the fire insurance premium on her home religiously but doesn’t floss her teeth. People play the lotto but don’t take advantage of their employers’ 401(k) matching contributions. Organizations, including governments, are as bad or worse.  Passengers remove their shoes at airports to prevent a shoe bombing, which has been attempted once in human history—unsuccessfully—while infrastructure is allowed to crumble to the point of collapse, such as the I-35W Bridge in Minneapolis, Minnesota, that collapsed under the weight of normal traffic and killed 13 people. That catastrophe didn’t occur because it was rare, hard to predict or even unpredictable, a black swan in modern parlance from Nassim Nicholas Taleb’s 2007 classic of the same name.  Instead, those dangers are obvious and imminent; much like the danger of a charging gray rhino, from which Michele Wucker’s The Gray Rhino: How to Recognize and Act on the Obvious Dangers We Ignore (2016) derives its name.

In February of 2017, the CFA Society Chicago’s Book Club had the privilege of hosting Ms. Wucker in person to discuss her Book. The conversation was wide ranging and included water shortages, global warming, the Challenger Shuttle disaster, and many other topics. Why do we spend resources worrying about and preventing rare events but ignore or do nothing about obvious, preventable dangers? Ms. Wucker has several explanations from the social sciences: taboos about raising alarms, groupthink, anchoring and confirmation biases. She notes the origins of the sobriquet Cassandra, an unflattering term used to describe people who warn others about potential dangers. The original Cassandra was given the power of prophecy from the god Apollo. When she didn’t reciprocate Apollo’s affections, he threw a curse on her that prevented others from believing her prophecies, including her prophecy that the Greeks would attack Troy, which is what ultimately happened. The negative connotations that are associated with the name of someone who correctly warned others about impending danger speaks to deep seated cultural aversions to raising alarms. That negativity combined with the fact that Cassandra was a woman who was punished for shunning the advances of a male superior is a similarly depressing statement about society.

With the manifold existence of Gray Rhinos and their causes firmly established, the question turns to their taxonomy and life-cycle. Ms. Wucker identifies eight types and five stages of a Gray Rhino.  The eight types include the “Inconvenient Truth” Gray Rhinos that are widely recognized but not acted upon due to denial, including manufactured denial, and high costs to fix.  Global warming is the classic example of an Inconvenient Truth Gray Rhino. There are also the “Creative Destruction” Gray Rhinos such as Kodachrome, where acceptance and orderly unwinding are the only tenable solutions. It was not mama but the inevitable march of time that took our Kodachrome away. For each of the eight types in the taxonomy, all follow a life cycle of five stages. The first stage is denial, the second is muddling or kicking the can down the road, followed by haphazard diagnostic exercises, the third, panic, the fourth, and finally action.

Ms. Wucker’s Taxonomy and Stages are invaluable contributions to the ongoing policy discussion. The Taxonomy and Stages also need to be viewed in the context of organizational motivations and individual incentives, though. A good example is the Challenger disaster that Ms. Wucker opens her book with.  When making go/no-go decisions, it’s helpful to look at data from previous failures as well as data from previous successes. Space shuttles relied on re-usable solid rocket boosters for their initial launch. The boosters were built in segments and each segment had o-rings that were supposed to keep hot gas from escaping. When o-rings get too cold, they become brittle and fail allowing hot gasses to escape, which is what caused the Challenger disaster. On the morning of the launch, one engineer spoke up against the launch. The coldest successful launch took place when the temperature was 53 degrees. In that launch, gas escaped passed the first ring and caused corrosion on the backup ring, but the backup ring contained the gases. Below 53 degrees, there were no data. On the morning of the Challenger launch, the temperature was 35 degrees.

On January 28, 1986, NASA got an additional data point. The backup ring failed and seven astronauts died.  The Challenger disaster didn’t happen because the world’s smartest people didn’t understand the threat of cold weather to the proper function of o-rings. It happened because of the tremendous pressures on NASA to proceed with the launch. The space shuttle was originally conceived as a way to easily and cheaply launch people into space and return them in a re-usable ship.  The term “space bus” was even used. In practice, the program proved to be more costly and inefficient than the shuttle’s predecessors. NASA was under tremendous pressure to demonstrate the viability of the program.  In addition, the Challenger was going to launch the first teacher, Christa McAuliffe, into space. Millions of people were tuned to their television sets to see a launch that had already been delayed several times.  The organizational and public relations pressure to proceed with the launch overwhelmed good judgement.

Organizational pressures and incentive structures are that root of several Gray Rhinos. Scarce public funds either can be used to pay teachers or fix bridges that seem to work fine (until they don’t). Publicly traded companies struggle to look past obstacles beyond meeting quarterly numbers. Politicians aren’t incentivized to deal with any problem such as global warming whose most detrimental effects are likely to occur after a two, four, or six year term.

The assembled Book Club members and Ms. Wucker did offer several solutions to the Gray Rhino problem.  First, align incentives. Executive compensation should vest fully over a period of years or even decades.  Investors should similarly hold companies to account for long term performance and be more forgiving of short term volatility. Allowing US banks to hold stocks as banks do in Japan and Germany might allow more steady capital into capital markets and reward longer term performance, too. Second, break the problem into small pieces. There’s an old expression: “How do you eat an elephant? One bite at a time.” The same logic applies to Rhinos. Instead of trying to fix all the nations crumbling infrastructure, prioritize. Fix one bridge at a time, starting with the most dilapidated. Third, to combat groupthink and denial, include diverse perspectives in one’s circle and allow multiple channels of access to leaders and decision makers.  Related to that third point, the group discussed the competing leadership styles of Presidents Reagan and Kennedy. President Kennedy’s administration followed a spokes-on-a-wheel format where multiple influencers had direct access to the President, which could explain his successful resolution of the Cuban Missile Crisis. President Reagan, on the other hand, had a more linear chain of command with multiple bottlenecks and chokepoints, which could explain how in the Iran-Contra Affair a few rogue elements of his administration where able to conduct arms sales and a covert war without knowledge or involvement from either the State or Defense Departments.

The Gray Rhino is a welcome addition to current policy debates and compliments established organizational behavior and social science literature well. At 304 pages, it’s also a manageable and enjoyable read. The Society is very grateful to Ms. Wucker for her book and for her attendance at our meeting.