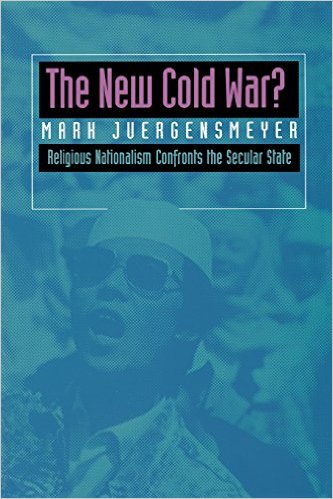 The United States won the Cold War when the Soviet Union collapsed in 1991.  Liberal democracy and capitalism reigned supreme; the primary ideological alternative, communism, had proved to be economically and politically unviable.  In 1992, Francis Fukuyama published The End of History and the Last Man, in which he argued that, with the collapse of communism, humanity may have reached the endpoint of its cultural and political evolution.  But history didn’t end, and according to Paul Berman, the euphoria of the moment “led so many people – in the United States, nearly everyone – to underestimate the dangers of the moment.”

The dangers came from an ideology far older and more intractable than communism, and if most scholars underestimated it, Mark Juergensmeyer definitively did not.  In his book The New Cold War? Religious Nationalism Confronts the Secular State, published in 1993, Juergensmeyer identifies the continued dominance of religion in many parts of the world, and how many of these religious worldviews conflict with the secular values of liberal democracy.

Juergensmeyer starts in the Middle East, with the Iranian Revolution of 1979 as his first recent example of religion overthrowing a secular government.  Religion has had influence in many other Middle Eastern countries as well, including Egypt.  Even Israel, essentially a secular state, has constituencies that have called for an explicitly religious state.  For example, the Kach Party has stated that non-Jews have no place in Israel, and have called for the country to be run according to Jewish law.  Some of the Kach Party’s statements about Arabs were eerily similar to Hitler’s statements about Jews.

Juergensmeyer also traces the strength of religion in politics in South and Central Asia, including Sri Lanka, Mongolia, Uzbekistan, and most notably India.  Running a secular government has been a challenge in India given the competing religious factions, including Hindu nationalists (such as the BJP) and Sikh nationalists.  In some instances, this competition has resulted in violence, perhaps reaching is apex in 1984 with Operation Blue Star and its aftermath, in which thousands were killed, including Indira Gandhi, the first female Prime Minister of the country.  Although Sikh and Hindu nationalists strongly disagree about many things, they are united in their opposition to secularism; according to Juergensmeyer, “the Sikh rhetoric is strikingly similar to the language of Hindu nationalists”.

The key question that Juergensmeyer asks at the end of the book is if secular western democracy can be compatible with religious nationalism.  He spotted many challenges in 1993, and the last 22 years have only highlighted the challenges in reconciling these two ideologies.  Perhaps surprisingly, religious nationalism can be very compatible with democracy in many countries, simply because many countries have a homogenous religious population.  If 95% of Iranians are Shi’a Muslims, democracy and theocracy may look very similar in that country.  Indeed, Fareed Zakaria, in his book The Future of Freedom, stressed that often Americans focus too much of promoting democracy, and not enough on promoting liberalism, and then are surprised when liberal values don’t automatically follow from democracy.

And thus the main tension between liberal democracy and religious nationalism comes from the tension between liberalism and theocracy.  Questions about human rights, protection of minorities, and freedom of expression may be answered very differently depending on how societies are structured.  This tension was much discussed in the aftermath of the recent Charlie Hebdo shooting, and highlighted that, however optimistic Juergensmeyer was about reconciling liberal democracy and religious nationalism, there may be intractable differences that continue to cause major problems in our world.

October 20, 2015: The Second Machine Age: Work, Progress, and Prosperity in a Time of Brilliant Technologies by Erik Brynjolfsson and Andrew McAfee