CFA Society Chicago Book Club: The Only Game in Town by Mohamed El-Erian 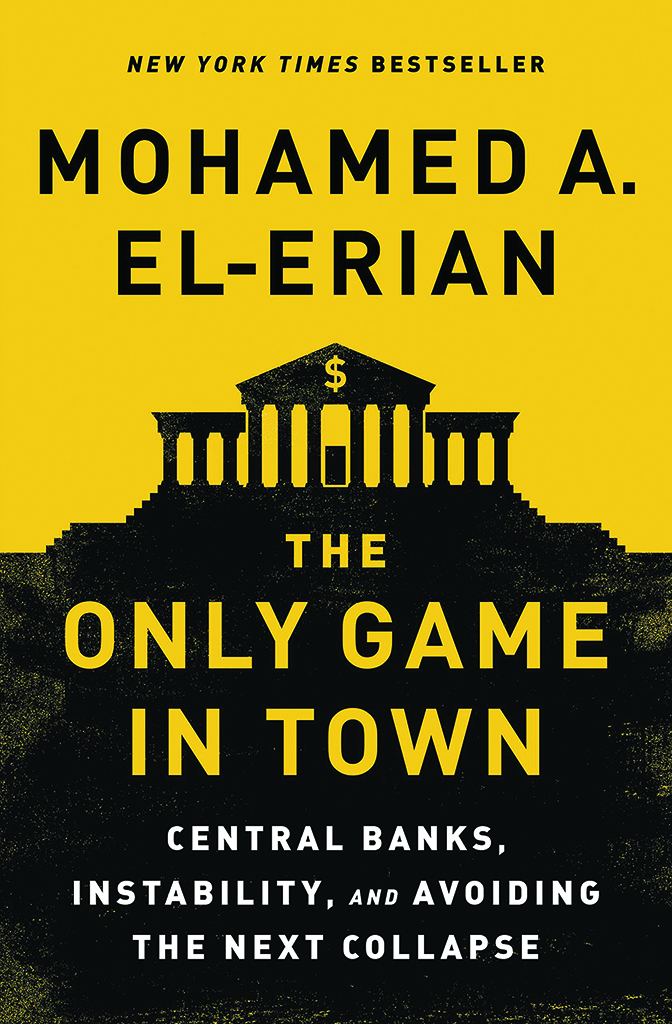 Extraordinary central bank interventions during economic crises aren’t new.  In his Pulitzer Prize-winning Lords of Finance, Liaquat Ahamed mentions Emperor Tiberius injecting one million gold pieces into the Roman economy to keep it from collapsing in 33 AD.  Extraordinary central bank policy coordination similarly isn’t new, as Mr. Ahamed notes with the frequent meetings between the heads of British, French, US, and German Central Banks and the resulting coordinated policy actions during the First World War and the Great Depression.  What is new is the extent and duration of those interventions and the absence of any corresponding fiscal or structural reforms. After Tiberius’s intervention, Rome soon returned its focus to commerce, conquest, and imperial assassination.  Roman merchants and farmers didn’t sit idly waiting for the next round of monetary stimulus and then dispose of their wares and crops in panicked fire sales when cheap money didn’t materialize.  Contrast that with our times.  Six years into an economic expansion, interest rates remain at historic lows—even negative in several major economies—with little hope of fiscal or structural reform.  A small uptick in volatility can elicit calls for further quantitative easing (college campuses apparently aren’t the only places where people are clamoring for safe spaces).  Central banks have become The Only Game in Town, the title of Dr. El-Erian’s book and the subject of the CFA Society Chicago’s July 19, 2016, Book Club meeting.

Dr. El-Erian brings uniquely diverse cultural, educational, and professional perspectives to the financial crisis and the ensuing central bank interventions.  His mother is French and his Father is Egyptian, and he spent time growing up in Egypt, in France, where his father was the Egyptian Ambassador to that country, and in New York City, where his father worked at the United Nations.  His enrichment continued in the United Kingdom where he attended boarding school, Cambridge, and finally Oxford, where he earned a doctorate in economics.  His professional resume is equally diverse and impressive.  It includes the International Monetary Fund (IMF), Harvard University’s endowment, and PIMCO, one of the world’s largest bond investors with approximately $2 trillion under management.  It’s there where Dr. El-Erian served as co-CIO along with PIMCO-founder Bill Gross.  That’s in addition to his numerous publications, boards and committees, and his previous book, When Markets Collide, which won the Financial Times and Goldman Sachs Business Book of the Year Award as well as The Economist’s Book of the Year Award in 2008.

In addition to his qualifications to write on the subject, Mr. El-Erian served as CFA Society Chicago’s keynote speaker at its 2015 Annual Dinner, which further piqued Book Club members’ interest.  In his exposition of the issues facing global markets and central banks’ responses to them, Dr El-Erian didn’t disappoint the assembled Book Club Members.  In the plain-spoken fashion that made When Markets Collide a classic, he explained complex, interdisciplinary phenomenon in simple terms with the assistance of helpful metaphors.

For example, he explained the collapse in confidence and liquidity during the crisis in terms of a drive through: Customers pay at the first window and receive their food at the second.  When customers aren’t confident that they’ll receive their food at the second window, they’ll demand it at the first window.  When restaurants don’t relent, both parties that otherwise wish to transact will walk away – market failure.  As another example, he explained that trying to push certain products and activities out of the banking system was like pushing on a waterbed.  Rather than remove the activity, pushing simply displaces the activity to elsewhere in the bank and non-bank financial sectors.

Dr. El-Erian also noted the increase in the size and power of the end-users of capital, the buy-side, relative to financial intermediaries, the sell-side.  The phenomenon has been noted, among others, by John Rogers, the former CEO and President of the CFA Institute, in A New Era of Fiduciary Capitalism? Let’s Hope So, which appeared in the May/June 2014 edition of the Financial Analysts Journal.  Dr. El-Erian explained the consequence of that transformation, namely that the growing end-users are trying to force more transactions through the shrinking pipes of the financial intermediaries.  The result in the financial world is as calamitous as the result in the plumbing world.

In all, Dr. El-Erian noted nine challenging trends in global economies related to extraordinary extended central bank interventions, the subject of Part Three of his book: inadequate growth models, high unemployment, increased inequality, decreased institutional credibility, political gridlock, increased trade imbalances and tensions between the core and the periphery of the global economy, the rise of shadow banking, decreased liquidity (the pipes mentioned above), and finally the increased complacency among market participants due to a perceived central bank put.  In that exposition Dr. El-Erian touched on several insightful points.  For example, he noted the Bank of International Settlements (BIS) meetings allowing for back-channel discussions and problem solving between the monetary authorities of different economies.  A similar mechanism for averting armed conflicts through international organizations such as the United Nations has been noted in Bruce Russett and John O’Neal’s Triangulating Peace.  Perhaps a longer book would have allowed those points to be developed further.  The Only Game in Town is only 296 pages, including appendix.

That largely concluded the exposition of the problem, where Book Club Members gave Dr. El-Erian high marks.  The remainder of the book was a meandering attempt to solve the problems noted in the first part of the book, which left members disappointed.  The desultory journey covered bi-modal distributions, behavioral finance, several other topics, and even a section on diversity in the workplace.  One member quipped that the last chapter of the book was probably a last-gasp effort to fulfill a contractual minimum page requirement with the publisher.  Dr. El-Erian had a similar chapter on organizational leadership at the end of When Markets Collide.  In that book he also noted the failure of macro-prudential regulators such as the IMF, his former employer, to balance their academic training with technical knowledge gleaned from actual market participants.  Perhaps better institutional leadership and reforms, including more diversity, could foster economic stability and growth, but Dr. El-Erian failed to argue the point persuasively, at least in the judgement of the participating Book Club members.

The Only Game in Town is a worthwhile addition to the discussion about the continued role of central banks in the current economy and the potential pitfalls of continuing down the current path.  Even though Dr. El-Erian ultimately failed to solve the problems he elucidated, he’s hardly alone in that regard.