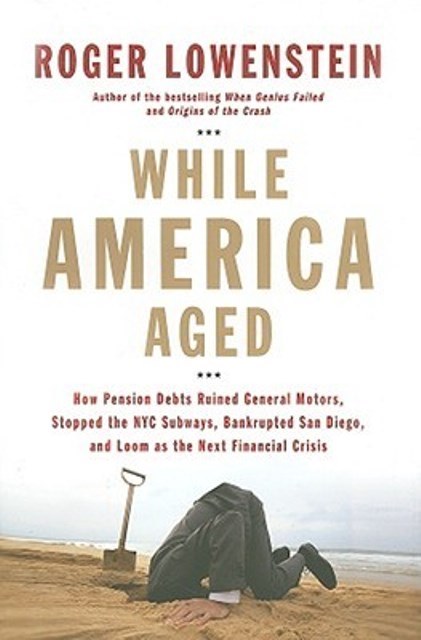 The specter of unfunded pension liabilities haunts many of our major cities and a large number of public companies. This is especially true in the city of Chicago as public unions continue to threaten to strike over benefits and unfunded pension liabilities. We discussed Roger Lowenstein’s book about this topic at a well-attended CFA Society Chicago Book Club meeting held in April. The book attempts to answer why the private pension system as conceived in the United States has failed.

Part One: Who Owns General Motors?

The question asks whether it is the shareholders or workers who own a publicly traded company.  GM was one of the most successful companies in the world, however due to labor union gains at the bargaining table, its future cash flow would not accrue to its shareholders, but rather to its pension obligations.

This part of the book revolves around Walter Reuther and the UAW. Mr. Reuther became the visionary leader of the UAW in the 1930’s. In 1950 Mr. Reuther crafted what Fortune Magazine dubbed the “Treaty of Detroit”. It was a 5-year agreement which committed GM to guarantee a pension, wage increases with a cost of living formula and hospital and medical insurance at half cost. It was the inability to fund these ever-growing commitments which eventually led to the downfall of GM.

Pension plans for city workers help to guarantee a stable work force; a highly desirable trait for teachers, firemen and transportation workers. Reliable bus and train service is critical for the economy of a city. The second part of the book examines the history of wages and pensions for the public workers of New York City.

The most effective union leader was Michael Quill, an Irish immigrant who was a member of the IRA and fought in the rebellion against the British. In the 1930’s, the Transit Workers Union (“TWU”) was led by a coalition of Communists and former IRA activists. In 1937, Mr. Quill became President of the TWU. A 13-day strike in 1965 permanently changed the dynamic between the unions and the city. New Yorkers endured the worst traffic-jams in its history during this strike. The state government reacted by passing stricter laws prohibiting strikes by public workers. These laws were ignored as union leaders happily went to jail. The citizens of any municipality are captive customers and are unable to shop elsewhere for subway service or police protection.

The risk that the government will put the expense of a pension plan onto future generations is illustrated by the city of San Diego. By the summer of 2005, the municipal pension fund in San Diego, the San Diego City Employees Retirement System (“SDCERS”) was underfunded by $1.7 billion. How it got that way is addressed in the third part of this book.

In 2005 the national press referred to San Diego as “Enron-by-the-Sea”. The cause of the underfunding was the extreme reluctance of local politicians to raise money by increasing taxes. The political climate in the city was very conservative with a mistrust of any tax. The city covered its cash shortfalls by continuing to avoid making the required pension contributions.

Labor unions in the city began to contribute heavily to political campaigns; this was more effective in San Diego which had a weak form of city government where a relatively small amount of votes could sway elections. In the end, public employee unions had political clout on par with business interests. City managers became more adept at structuring solutions which circumvented state laws regarding the required funding of SDCERS.

Conclusion: The Way Out?

The author has a few suggestions as to how to mitigate some of the risks endemic to these pension and health care schemes. However, most participants at the Book Club thought they were rather weak. The author is of the opinion that the 401K is not an adequate substitution for a pension and advocates a “national” 401K offering matching credits to lower wage earners. He also suggests that 401K providers be required to offer an annuity as a default option. The author ends the book with a plea to strengthen social security by raising taxes, an unpopular but perhaps necessary measure.