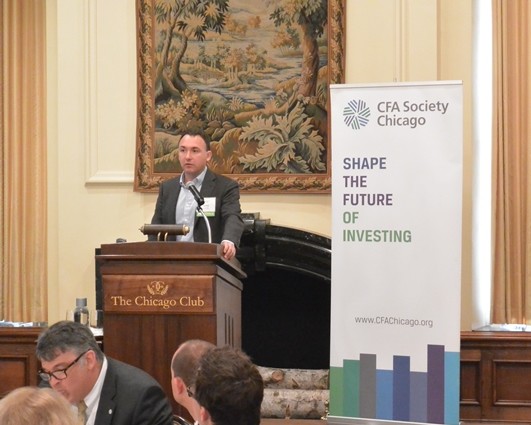 The prospect of curing or even “containing” cancer has proven to be an elusive goal. One company that has recently joined the battle against this disease is AstraZeneca, a UK based Biopharmaceutical Company. On June 6th, CFA Society Chicago hosted a presentation by AstraZeneca given by Luke Miels, Executive Vice President Global Products and Portfolio Strategy. Mr. Miels outlined AstraZeneca’s going forward strategy and its plans to return to growth in 2017.

After a brief review of the company’s most recent acquisitions, Mr. Miels illustrated that an increase in research has yielded an increasing number of high-impact publications and Phase III trials of prospective breakthrough drugs. This increase in research and development has set the table for an acceleration of growth that is forecast to occur in 2017.

AstraZeneca will focus on three main therapy areas: Respiratory, Inflammation & Autoimmunity, Cardiovascular & Metabolic disease, and Oncology. There are currently 10 AstraZeneca drugs in late-stage development targeted to treat these diseases. The drugs he highlighted did not exist five years ago. Mr. Miels went on to describe five growth platforms that will support the three main therapy areas. These platforms currently represent 56% of AstraZeneca’s business.

For each of the three main therapy areas, Mr. Miels listed the existing or late-stage trial treatments, the evolution of the treatments and the areas for which the treatments are most profitable. It appears that AstraZeneca is having its greatest success in emerging markets and the EU. It has developed successful treatments for severe asthma and COPD (Beralizumab), a super-aspirin (Brilintal/Brilique) and a treatment for diabetes (Faxiga).

AstraZeneca is a relative newcomer to Oncology. There are new treatments in development for ovarian cancer (Lynparza) and lung cancer (Tagrisso). AstraZeneca intends to focus on tumor resistance, DNA damage response, Immuno-oncology and antibody conjugates in its fight against this terrible disease. The ovarian cancer and lung cancer treatments appear to be more effective for patients with DNA mutations that make them susceptible to these cancers.  Research is ongoing by multiple drug companies on what treatments might make the immune system be able to recognize and fight an invading cancer.

There were several questions posed to Mr. Miels following his presentation. They focused on patent expiration and generic drugs. One question focused on the manufacture of a drug after patent expiration. Mr. Miels stated that it still was cheaper for the company with the patent to manufacture the now generic drug; however there is little incentive for the company to do so.  Another question concerned the efficacy of a biologic generic drug.  Mr. Miels stated that generics of chemical drugs are exact copies, however due to the nature of its manufacturing; biologic drugs are never exact copies.