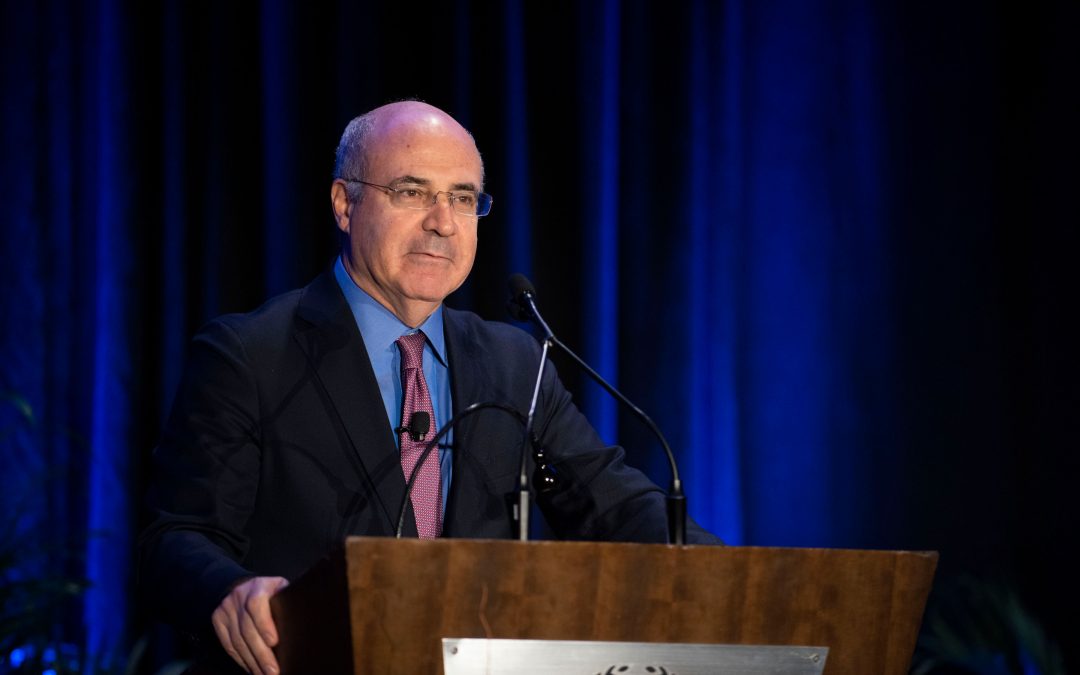 A sell-out crowd of 1,100 attended the 33rd Annual CFA Society Chicago Dinner on November 7th at the Sheraton Grand Chicago Hotel. In his after-dinner remarks, Daniel Kastholm, CFA, chair of CFA Society Chicago, welcomed and thanked all for coming to the event honoring this year’s Hortense Friedman, CFA, Award for Excellence recipients and new CFA charterholders. He recognized the work done by the Annual Dinner advisory group in planning the event, as well as all advisory group volunteers that helped plan events throughout the year.

His advice to all 5,000 members within the CFA Society Chicago:

Finally, Kastholm and all dinner attendees, congratulated the 140 new CFA Charterholders who passed all three levels of the CFA exam and completed four years of relevant work experience. The exams require hundreds of hours of study, with candidates sacrificing a significant amount of time, energy and effort.  Becoming a CFA charterholder demonstrates initiative, leadership and commitment to professional excellence in the investment industry.

The first Hortense Friedman, CFA, Award for Excellence award was given to Alan M. Meder, CFA, currently senior managing director and chief risk officer at Duff and Phelps. Kastholm highlighted Meder’s experience since receiving his CFA charter in 1988 including his service on multiple advisory groups, serving as chair of CFA Institute’s Board of Governors and service as a CFA exam grader for 23 years!

Taking the stage, Meder thanked Kastholm and the audience for the humbling introduction and award.  He reminded the attendees of the award’s namesake, Hortense Friedman, CFA, the brave woman who worked tirelessly to show others the way. He highlighted Friedman as a “beacon for others” and noted she was one of the first women to earn the CFA charter, in 1964. Meder left the attendees with wise words on how to continue the inspirational work of Friedman. “Bring more balance into the room…Invite women…and all to join the analytical ranks to become charterholders. “You cannot be what you cannot see.”

The second Hortense Friedman, CFA, Award for Excellence was awarded posthumously to Thomas N. Mathers, CFA. Mathers began his investment career at Northern Trust, founded Mathers and Company in 1961 and managed the Mathers Fund, his no-load growth mutual fund, from inception in 1965 until 1982. He was a past president of CFA Society Chicago and was involved in numerous foundations throughout his career. Kastholm described him as a “counselor of high integrity and a leader in the movement to bring professionalism to the field of investments.” Though his passions lay within investments, he always believed the most important thing in life was family. Mathers’s daughters accepted the award on his behalf as the crowd recognized his great accomplishments.

Bill Browder, CEO of Hermitage Capital and author of the best-selling book Red-Notice, was the keynote speaker of the night. Kastholm shared Browder’s background and qualifications over his career in investing.  Growing up in Hyde Park, Browder attended the University of Chicago. After graduating from Stanford Business School, he got involved in emerging markets investing, focusing on Post-Soviet Russia. As Kastholm noted, Browder’s record demonstrates how markets can be inefficient and how there remains value in active management (met with applause). Through his fund, Hermitage Capital, Browder became the largest foreign investor in Russia until 2005, when he was denied entry into the country largely for exposing corruption in state-owned entities. In 2009, his lawyer and friend, Sergei Magnitsky, was killed in a Moscow prison after exposing a $230 million tax fraud.  After his death, Browder was instrumental in passing the Magnitsky Act in 2012, allowing the U.S to sanction individual human rights abusers by freezing their assets and banning entry to United States. After the brief introduction, Browder took the stage to share his unique and influential life story.

With a warm welcome from the audience, Browder thanked CFA Society Chicago for the opportunity to share his story and expressed delight at seeing a number of friendly faces. He jumped right into his story in the summer of 2018, when he was invited by the chief anti-corruption officer of Spain to give evidence of Russian money-laundering. Before his meeting in Madrid, he was stopped by the hotel manager accompanied by two Spanish police officers. “You’re under arrest – INTERPOL Russia”, said the police officers.  Worried for his safety, he sent out multiple tweets and even contacted his Spanish lawyer while in custody. Browder recounted this memory to reiterate to the audience why he was truly “delighted to be here”.

Born in Princeton in 1964, Browder was raised in Chicago in a pro-communist family. His grandfather was a labor union organizer in Kansas and ran for president on the communist ticket in 1936 and 1940. During his rebellious teenage years, he recalls asking himself “What is a good way to rebel from a family of communists?” After graduating from Stanford in 1989, he discovered the perfect answer while evaluating post-graduation options: “to become the biggest capitalist in Eastern Europe”. With the Berlin Wall collapsing in 1989, he moved to London and eventually took a position on Salomon Brothers’ Eastern European banking team. On an influential client trip to Russia, he advised a fishing fleet on a privatization project. Performing analysis on the ships, he determined the fleet was approximately worth $1 billion. The disconnect? The government was selling 51% of the fishing fleet for $2.5 million. At that moment, he realized he should be investing, not advising, on the Russian privatization program.

In Russia’s transformation from communism to capitalism, a voucher privatization program transferred assets to Russian citizens to create owners of assets. With vouchers trading in the secondary market for approximately $20, the sum of vouchers would amount to around 30% of total Russian capital. Assuming a population of 150 million, the entire country of Russia was assumed to only have a $10 billion market capitalization. “This would be the single most compelling investment opportunity that’s ever existed in the history of financial markets,” he concluded.  After ensuring these privatization deals were widespread, he went back to London and recommended that Salomon Brothers stop what they were doing and invest in Russia. Eventually, he impressed a senior partner in New York and received $25 million to invest.

Seven months later, The Economist wrote the 1994 article “Sale of the Century” and a wave of investors entered the thinly traded Russian equity markets. The markets went up 500% in three weeks, and Browder’s $25 million investment turned into $125 million. With all the success, he traveled back to London to raise outside money for his fund, but bureaucracy among other difficulties caused him to leave Salomon and start the Hermitage Fund in April 1996. His fund was one of the most successful until 1998, when the Russian government defaulted on its bonds. The currency decreased 75% and his $1 billion fund lost $900 million. Terribly ashamed, he was determined to not leave his investors with losses. He invested in mostly oils and metals companies, on the theory their share price should go up if revenues (in dollars) were stable and costs (in rubles) were decreasing.

Dealing with oligarchs who broke every rule in the book proved to be a hindrance to this investment theory, however. He resorted to becoming a shareholder activist. Through diligent research and some “stealing analysis”, he spotted asset stripping, transfer pricing and embezzlements on an industrial scale by the oligarchs. They poisoned the psychology in Russia over a 10-year period, when the richest in Russia went from 6 to 250,000 times richer than the poorest in Russia. One “stealing analysis” shared with news agencies was that Russian oil and gas company, Gazprom, was trading at a 99.7% discount per barrel of hydrocarbon reserves to Exxon and BP. After further shareholder activism, Vladimir Putin, President of Russia, entered the picture. Up until 2003, Browder and Putin’s interests were aligned against the oligarchs, using the principle of “Your enemy’s enemy is your friend.”  However, this alignment quickly reversed, and in November 2005, Browder was deported back to London from Moscow as a threat to national security. Eighteen months later, and after the fund’s liquidation, the Hermitage Fund had been raided by Russian police and re-registered under the name of an ex-convict in Russia.

Sergei Magnitsky, a Russian tax lawyer, was hired to investigate the raid and stop what was happening.  He discovered two parts of the scheme, with the latter being successful:

The largest tax refund in Russian history, $230 million, was paid out on Christmas Eve. Magnitsky testified to the Russian government and was subsequently arrested by the police. After being placed in a pretrial detention, he was pressured to rescind his testimony but refused. For Magnitsky, his integrity was the most important thing he had. He was sleep-deprived, placed in cells with no heat or windowpanes, and moved from cell to cell in the middle of the night. This was done to get him to withdraw his testimony and sign a false confession. The torture continued to get worse and he eventually required medical operations for his health issues. Remaining adamant in his integrity, he was transferred again to a maximum-security prison (without a hospital). His health conditions spiraled downward, and he was repeatedly refused medical attention. On Nov 16, 2009, Magnitsky passed away at the age of 37, leaving behind his wife and two children.

From this point on, Browder made a vow to devote all his time to pursue justice for those who killed Sergei Magnitsky. Using Magnitsky’s meticulous complaints to the Russian government during his jail-time, this would become one of the most well-documented cases of human rights abuses in 75 years. Since there was no justice to be had inside Russia, Browder decided to get justice outside Russia. The oligarchs tended to keep money outside of Russia in London real estate, Swiss banks, etc. His solution was the Magnitsky Act, which allowed the U.S. to sanction individual human rights abusers by freezing their assets and banning entry to United States. As legislation similar to the Magnitsky Act passes around the globe, Putin and others have been unable to park their assets outside of Russia, which is a growing frustration for abusers. In his departing remarks, Browder stated a desire to continue giving Magnitsky a legacy: that his death wasn’t meaningless, and there are new ways and technologies of going after killers in the world. He remains vigilant in furthering Magnitsky Act legislation globally.

CFA Society Chicago thanks the following organizations for helping to make the 2018 Annual Dinner a success!

Thank you to all our Gold, Silver and Bronze sponsors as well!