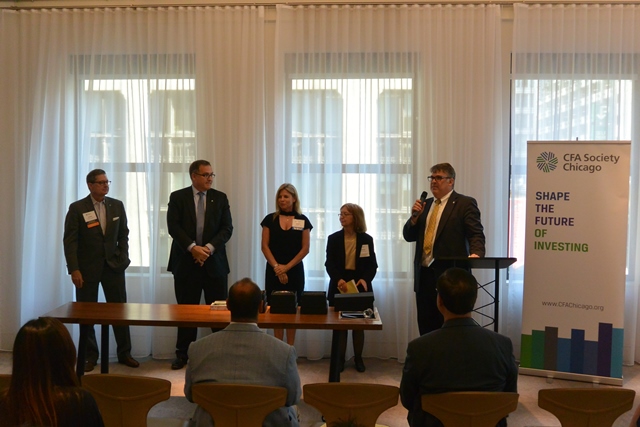 Beginning with a cocktail and appetizer hour, CFA Society Chicago’s annual business meeting was held at the Virgin Hotel on June 20th. Chief Executive Officer, Shannon Curley, CFA, led off with a summary of this past year which he labeled under the major theme of “Building the Base”.

The four major activities of focus were:

Jordan complimented the invaluable contributions of the Advisory Group Co-chairs, and made special mention of the increased program offering of the Professional Development Advisory Group.

Examples of new or expanded initiatives include:

Jordan participated in the global brand campaign as part of a committee including six other charterholders to discuss the charter, what it means and how it can be made more prominent in the future.

Jordan then concluded by thanking the CFA Society Chicago staff and Shannon Curley, CFA, for his effort to grow the Chicago Society.

Marie Winters, CFA, Treasurer of CFA Society Chicago, was introduced next. Her remarks were brief, but included the society’s current financial standing including reserves sufficient enough to cover 14 months of operating expense. Recently we have used reserves strategically to upgrade technology and quality of programming.

After the 2015-2016 executive committee was thanked, Doug Jackman, CFA, was introduced as the incoming Chairman.

In the business portion of the meeting, the by-laws were approved, as well as the new slate of directors and officers for CFA Society Chicago.

Awards for amazing service were given to Justin Shepard, CFA, and Chris Vincent, CFA, and a special thanks was given to Larry Cook, CFA, who is departing as the Education Advisory Group co-chair.

Finally, Jackman was introduced as the next Chairman of the Board of Directors. Jackman spoke about not having a personal agenda, just his privilege to oversee the overarching agenda to build a strong Society which thrives on its volunteer system. Toward this goal CFA society Chicago plans to invest in upgrading systems and generating more active participation by members and member firms.

CFA Society Chicago is open to any ideas on how the Chicago society can further strengthen its brand and reputation.

The evening concluded with a reception that was a great opportunity to reconnect as well as meet new and interesting members.