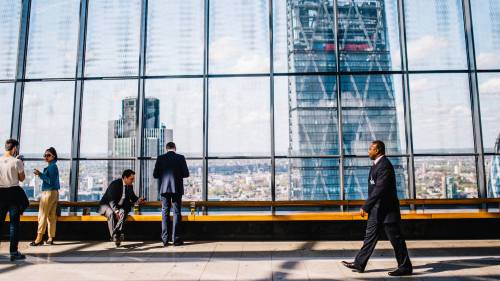 CFA Society Chicago members gathered in virtual form on September 10th to hear insights on the job market for charterholders across the country as well as specifically in Chicago. The event took the form of a panel discussion featuring retained recruiters from two executive search firms that serve clients across the country. John Ide, CFA, representing the Professional Development Advisory Group that hosted the event, served as moderator.

Matt Kral has sixteen years of experience recruiting in financial services, primarily focused on the Chicago market. At Watson Dwyer he serves a varied client base of asset managers, hedge funds, investment consulting firms, family offices, RIAs, private equity managers, and more, and has filled their hiring needs across nearly every level and function. Prior to recruiting, he traded options on the floor of the CBOT, followed by nearly eight years in institutional investment consulting with Mercer and Northern Trust.

Rob Mittenthal is a co-founder of Roberts & Ryan and has been involved in executive recruiting since 1989. He is the architect of the unique value proposition Roberts & Ryan presents for clients: completion and accountability in addition to traditional sourcing and recruitment. Having grown up in the executive search business, he has completed searches for all major CEO direct report functions as well as positions specific to the investment management industry. He has helped Roberts & Ryan develop a solid reputation within the private equity community.

Ide began the discussion by addressing the most disruptive element in everyone’s lives for the past six months—the COVID 19 pandemic and its disruption of all aspects of business management including hiring and recruiting. Kral reported that his clients had cancelled searches they were engaged in last spring, but that activity has since recovered slowly. They can’t continue suspending searches as their needs for staff changes hasn’t gone away completely. Mittenthal characterized his clients as putting searches on hold, rather than cancelling them, but also sees recent improvement. After very limited activity in the second and third quarters, he expects to see a more normal environment in the fourth. Both panelists reported inquiries from clients regarding what their competitors were doing, indicating a concern about falling behind their industry.

On the related matter of interviewing remotely, rather than in-person, Krall noted that this was of necessity and he thought it led clients to conduct more interviews than they might have done in- person because of the flexibility in scheduling offered by the virtual format. He expected remote interviews to remain a part of the process even when the pandemic goes away. Some clients have moved to in-person interviews but held outdoors to allow for social distancing. Mittenthal said remote interviews can speed up the process because they eliminate any need to travel for out of town candidates. While his firm closed three searches in the second quarter without a single in-person interview, he saw them as an aid in a difficult environment, and not a complete, permanent solution. The higher the level of the open position, and the more experience required, the less likely remote interviews will be part of the process.

In response to Ide’s question about the change in the types of positions currently open in comparison to February, Krall said he was seeing more junior positions now as opposed to a wide variety before the pandemic. He thought his clients saw less risk in hiring into junior positions when face to face meetings weren’t possible.

The discussion next moved to focus on the market in Chicago for charterholders and whether or not the demand is shrinking, as many think, or merely shifting around. Based on much less activity from his Chicago-based clients, Kral thought the market could be shrinking. But Mittenthal, based in Chicago, did not observe the same trend. While about 75% of his firm’s business comes from turnover, the other 25% derives from growth. He noted in particular that the baby boom generation is now about half into retirement which creates opportunities for younger managers to move up a level.

The panelists, however, agreed that there was a transition underway that left fewer positions for charterholders in traditional roles (portfolio managers, research analysts, and traders) focused on equities and fixed income. Instead, more positions were opening up in different asset classes like private markets (equity and debt) and alternatives (mainly real estate and hedge funds). Similarly, jobs are moving from the large broad-based asset managers to niche firms like family offices, RIAs, and Outsourcing CIO firms. The roles for charterholders are also changing with growth in positions like product specialists, treasury management, investor relations, and in-house managers for banks and insurers.

Neither panelist saw a material decline in the supply of qualified job candidates. Kral observed an excess of candidate supply over demand reflecting a hangover from the 2008-09 financial crisis that generated an emphasis on cost control. Mittenthal saw the situation not as a challenge in finding candidates, but in selecting the best candidate. That is constant for him.

On the topic of working from home and whether this will remain a common feature, the panelists agreed that it will be more common in the future, but most jobs will probably not involve working from home permanently. Employers are realizing the benefits of increased productivity (because staff enjoy the flexibility of performing tasks at any time of the day or night) and the reduced need for office floor space. Offsetting that is the need for at least occasional face to face meetings to facilitate collaboration. Enculturating new hires also requires in person interactions. As a result, jobs of the future may allow for some working from home but also require time in the office. The breakdown between the two will vary with roles. Staff in direct investment roles (traders, PMs, analysts) will spend more time in the office, while client relations and supporting staff may be offered more time at home.

Regarding efforts to improve the diversity of the workforce, Krall and Mittenthal both said their clients made this a priority. Consequently, both advised minority and women candidates to “shout their status” as members of sought-after groups. They should make sure their resumes and social media profiles made this obvious. Noting the dearth of women in the investment management field, Mittenthal reported his clients seek women candidates for every open position but won’t lower the bar to achieve that goal.

As a final topic, Ide queried the panel on compensation. Both members did not discern any trend in the size of compensation packages, but they agreed that there was a trend toward shifting the mix away from base salaries and toward discretionary bonuses. This gave employers the flexibility to alter total compensation in response to changes in profitability. Both panelists advised candidates to at least try to negotiate compensation when accepting a job offer. Kral said most firms he works with expect it, implying candidates may be missing an opportunity if they fail to ask for higher compensation.

The first question from listeners asked the skills shortfalls the panelists saw in candidates. They both responded with soft skills and noted that patience was an undervalued quality and lacking in many younger candidates. Mittenthal singled out communication and emphasized the need for candidates to communicate their convictions effectively and succinctly, without appearing overly confident. Krall recommended that candidates add ancillary skills, such as coding, to differentiate themselves. He thought this especially important for people with experience leaning towards administration and operations.

In response to a question on age bias, Mittenthal said it exists but it can go against both younger and older candidates depending on the firm and the job. Some clients prefer to hire young to save on compensation and others are willing to pay for experience.

In response to a final question on advice to people looking to make a move, Kral pointed out that recruiters aren’t well positioned to help with transitions because they are hired to find candidates that closely match experiences with the role they’re filling. However, he had two recommendations. First, evaluate what skills you have that can be transferred to a new role and emphasize them. Second, he advised seeking out people who have made a transition similar to what you’re attempting, and asking them for advice. Mittenthal echoed the networking advice adding that the best way to transition was within your current firm.