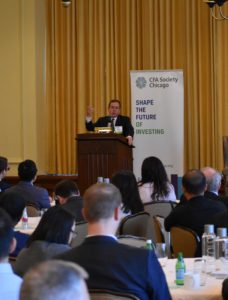 On May 17th, 2018, CFA Society Chicago hosted a program to address challenges and opportunities for the US and China. Patrick Chovanec, managing director and chief strategist, of Silvercrest Asset Management, presented his thoughts about the relationship between China and the US. His comments focused on the trade deficit and the effect of General Secretary Xi Jinping and President Donald Trump.

Chovanec noted that trade imbalances are not inherently good or bad. He stated that competitive advantages only address part of the reason for these imbalances.  Trade deficits and surpluses also result from differences in savings rates. In the 19th Century, the US borrowed from the UK to invest in plant and equipment, which resulted in a win for both parties. In contrast, Germany used its trade imbalance and relatively high savings rates to lend money to Greece, which used the funds for consumption, hurting both entities.

The trade imbalance between China and the US represents a significant challenge for both parties. The genesis for the trade deficit began with China’s desire to support capital investments with foreign demand for the goods it produced. This strategy can work for small and emerging economies. However, this plan does not work as well for the world’s second-largest economy.

The US supplied demand for goods produced in China until the 2008 financial crisis. China reacted to the decline in US demand with an investment boom to continue economic growth. China recognizes that it cannot rely on foreign demand and domestic investments. Growth in domestic consumption represents the long term path to sustainable growth.

Chovanec believes that higher trade barriers do not represent the solution for the US trade deficit. President Trump has focused on an unfair playing field, which presents a profound problem for the US. China should be open to a fairer system and continue its efforts to increase domestic consumption. However, lower trade barriers and increased consumption in China would cause the US to consume less and/or produce more. The biggest US problem is over consumption. The Federal budget deficit supports entitlement payments, which crowds out borrowing for investment. Borrowing for consumption versus investment underlies the US challenge.

In 2013, the third plenum of China’s Central Committee established a goal of opening capital markets. Xi has committed to this goal. The challenge for foreign investors has been a lack of economic reform and assessing valuation levels for assets. The Chinese stock market collapse in 2016 slowed foreign interest. The Chinese government heavily intervened to establish a floor of 3,000 for the Shanghai Composite by essentially ordering domestic owners not to sell.

China accounts for about 15% of global GDP, but just over 3% of global equity market capitalization. The world’s second-largest economy has long kept most foreign investors out of its capital markets. But as the country’s economic model undergoes a transition from export and investment-led growth, to one powered by consumer spending it is simultaneously opening its doors to foreign capital.

Nick Ronalds, CFA, founder and president of RhoFinancial, LLC, led a panel discussion about the opportunity for foreign capital investments in China. The panel included Christopher Balding, professor of economics at Peking University, Craig Feldman, global head of index management research at MSCI, and Sandy Li, senior vice president at Loop Capital Market, who discussed some of the more promising areas for investing in China’s future.