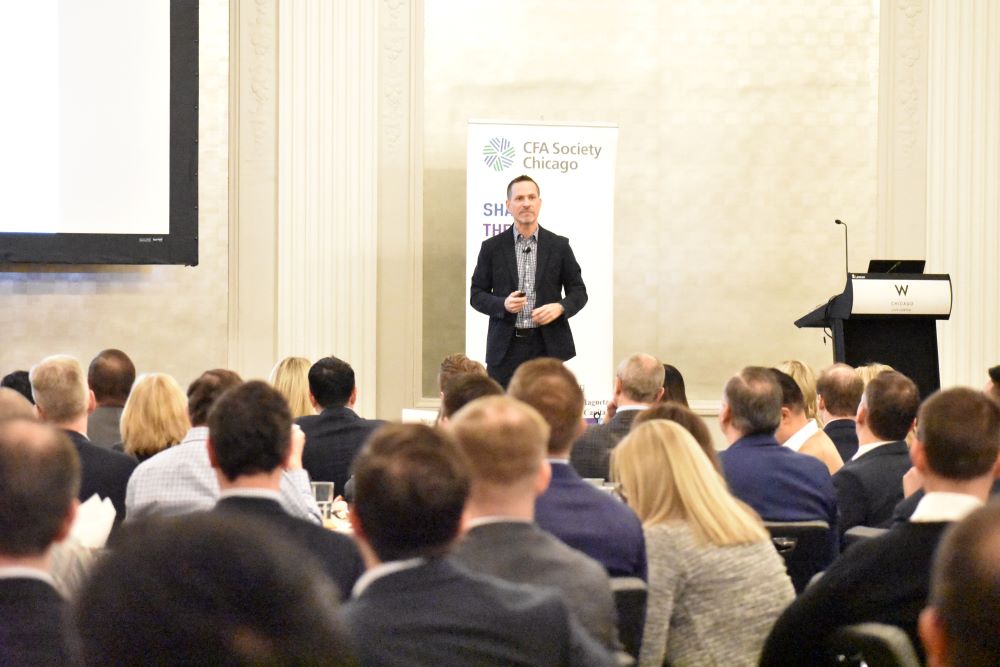 CFA Society Chicago’s Distinguished Speaker Series hosted Alec Litowitz at the W City Center for a discussion of the history of asset management and its evolution with respect to the hedge fund industry. Litowitz has been managing assets for over 26 years, co-founding Magnetar Capital in 2005. Magnetar Capital is an alternative asset hedge fund with nearly $13 billion of assets under management. Litowitz also serves as the Board Chair of Dare2tri, a non-profit that provides triathlon and event training to young people with disabilities.

Litowitz began his presentation by expressing his respect for those professionals who have obtained the CFA designation and their contribution to the profession. He then informed the audience that the true purpose of portfolio management is, simply put, “getting what the client wants”. For a portfolio to deliver this it must be:

Litowitz illustrated that there is a recursive cycle between products and models and that this has been seen over the 102 year of portfolio management. The first attempt at portfolio management was “Liberty Bonds” sold by the US government to fund World War I. The Massachusetts Investors Trust founded in 1924 pioneered the mutual fund. The CAPM pricing model proposed in the 1960’s attempted to attribute risk and John Bogle pioneered index investing beginning in the 1970’s.

The original hedge fund mantra according to Litowitz is that these funds seek to provide only returns derived from idiosyncratic risks. History shows that too many hedge funds are attempting to do this. He also believes that typical hedge fund efficacy cannot be answered by existing return model and claims that it is impossible to find a democratized model with an investable benchmark. A common set of risk-return elements would include the traditional (equity and credit) and the alternative (style and strategy).

Litowitz spoke of “strategy premia” and defined this as a return stream derived from exposure to specific hedge fund strategies, extractable via a targeted systematic approach.

To illustrate strategy premia, Litowitz stated that 93% of proposed mergers are consummated. This can be a tool to provide return through a targeted strategy.

Strategy premia is not alpha, but is an important part of alpha. In a table provided during his presentation, Litowitz provided the following typical returns broken into four categories:

It was interesting to note the comparatively low variance attributed to the return due to “Strategy Premia”.

Litowitz stated that there have been 790 hedge funds formed over the recent past, and 675 have survived for a decade or longer. There perhaps are 200 survivors that may not deserve to exist.  The failed hedge funds only got return from what the market gave them, obtaining no return on their strategy. Litowitz concludes that strategy must come from intuition. An experienced practitioner will derive a strategy from his intuition and then use data and draw conclusions to prove that his intuition has a chance to succeed. He asserts that a broad array of strategy premia is available from highly experienced practitioners.

The presentation ended by a comparison the features of cost of liquidity with respect to mutual funds, private equity, and hedge funds. Mutual fund returns typically come with low cost and high liquidity. Private Equity returns typically come with high cost and low liquidity.  Hedge Fund returns can vary with respect to these two features. However, neither mutual funds nor private equity have the power to be disruptive and drive change when compared to hedge funds.

Litowitz entertained some questions from the audience at the end of his presentation:

The first question inquired about Magnetar’s thinking with respect to diversified risk streams. Litowitz talked of being able to create, fund and source “good” risk. He compared this to the Netflix model necessitating that the whole chain be owned from content through delivery. In the same manner, Magnetar must be able to create or source risk.

A question about the use of data at Magnetar prompted Litowitz to state that there is not really data mining going on at Magnetar. Some data simply resides in your head; the hard part is creating new products using what you know. Practitioners must be able to look at alternative data sets and ideally come up with a proprietary database.

This was a fast paced presentation by a successful hedge fund manager. Perhaps the question to ask is really, “Dude, What’s Your Strategy?”