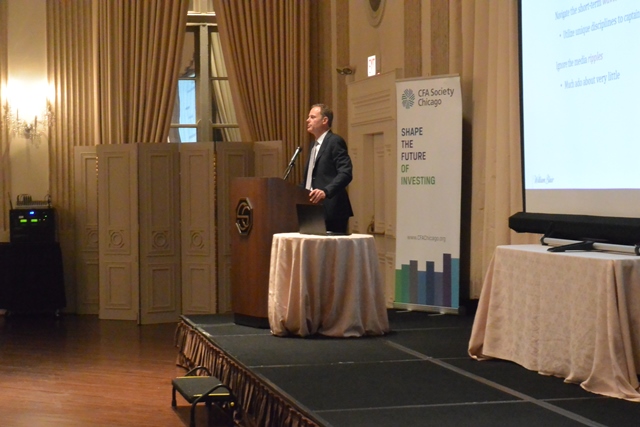 CFA Society Chicago hosted Brain Singer, CFA, on July 19, 2017 at The Standard Club to present on the topic – Riding the Waves: Dynamic Asset Allocation (DAA) and Evolution of Top-Down Investing.

Singer is the head of the Dynamic Allocation Strategies team and a portfolio manager at William Blair where he shares responsibility for strategy setting and portfolio construction across all DAS portfolios. He serves on the endowment investment committee for Exeter College at Oxford University and on Rehabilitation Institute of Chicago Foundation’s board. He is also the chairman of the “Free to Choose Network.”

In 2015, Singer received CFA Institute’s Distinguished Service Award and has formerly served as a board member and chair of the CFA Institute board of governors. He has written extensively on global portfolio, currency, and performance issues. In 2015, he was also inducted into the Performance and Risk Management Hall of Fame by The Spaulding Group.

While the hot debate of traditional active vs. passive consumes most talks in the investment industry, Singer focused on the other leg of liquid investment strategies, Liquid Alternative Investing. He focused his presentation on the following four broad strategies:

Quest for a superior investment strategy has given birth to many new ideas and terms that have changed the investment landscape as it was known two decades ago. After the advent of efficient market hypothesis and rise of CAPM, we now live in the world of smart beta and where CAPM is seen as dead by many. However, Singer believes CAPM is not all that dead. He advised to consider long-term horizons rather than the short-term when evaluating the relevance of CAPM as his initial remarks. He expressed how Modern Portfolio Theory post financial crisis has been seen as wounded where risks are known to be non-static and non-symmetric and that tail size does matter. He recommends focusing on the Macro investing models with dynamic allocation strategies for dealing with systematic risks in line with return expectations.

He also presented how the understanding of betas and alpha in the pre and post CAPM world has changed. In the advent of Smart Beta – Systematized Alpha, he cautioned against considering it as a free lunch and discussed smart beta strategies. He noted that such strategies aim at exploiting “Persistent” systematic risks following an auto-pilot strategy. He also cautioned against them as being static in nature relying on back tested rule sets. Further along in the presentation, he explained how such narrow rule sets can bring about volatility and fragility in the investment process and later provided recommendations to overcome such issues. 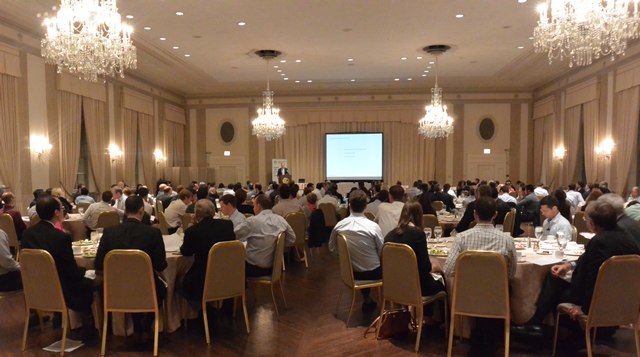 While discussing the risk premia strategy, Singer stressed on macro diversification based on fundamentals with a long term focus. For the short term, he advised to utilize unique rule set disciplines to navigate a dynamic path and ignore the media ripples which tend to make investment management process more fragile. He explained differing strategies using an example of a village at the foot of a mountain facing the risk of an avalanche taking extreme actions such as complete evacuation of the area vs. building fences to contain the snow to tackle the risk. He discussed different strategies to cope with risks faced in the investment world based on narrow vs. broad rule sets and impact of such rule sets on the overall investment process and asset allocation.

The speaker also spent a fair amount of time to share the active currency investment strategy. Despite not being an asset class, Singer explained that active currency investment is an effective alternative investment strategy as correlation of passive and active currency with assets is very low. He noted that currencies tend to converge to equilibrium prices (using PPP and IRP) faster (average of ~4-5 years) compared to assets (average of ~8-10 years). He presented varying half-life of currencies and asset classes along with correlation of USD index with monthly MSCI returns being as low as 30%.

He shared his Antifragile Investment Process methodology consisting of identifying and assessing opportunities of value to price discrepancies and designing portfolios with integrated risk exposures. He noted that such investment processes are dynamic, imperfect, progressive and make use of evolving tool set stating it to be analogous to growth of a living organism.

Singer also shared the idea of forming an Antifragile Investment Team for which “cognitive diversity” is key as he believes such team resources back multiple ideas using “wisdom-of-crowd framework” for survival. Such teams work continually to Research, Implement, Perform and Review numerous ideas as opposed to fragile teams which resources back few ideas that cannot afford dismissal.

He concluded by making a recommendation to identify market inefficiencies as dynamic investment opportunities stating: “There needs to be a level of market inefficiency to have market efficiency”. He again stressed on following wider rule sets for asset allocation decisions for a less fragile investment process.

At the end of the presentation he commented on the following questions from the audience:

How to tackle Behavioral Risk?

Near term opportunities in Active Currency