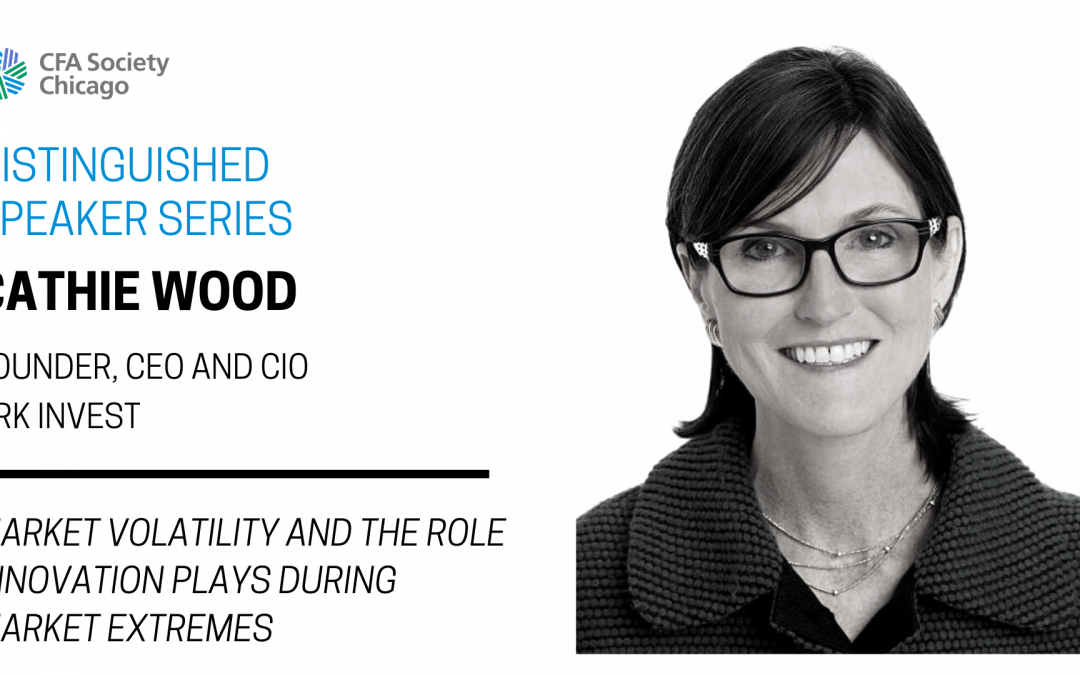 Wood started by explaining why she created ARK in 2014. After the 2001 dot com bust there was a shift in the market to risk aversion and passive strategies. This shift accelerated with the 2008-09 financial meltdown. Given this shift, Wood founded ARK to focus exclusively on investments that were innovative and disruptive in nature. Too much capital had pushed into the private markets even though low hanging fruit could be obtained with investment in the public markets. ARK’s time horizon is five years, and according to Wood, ARK is the closest you will get to a private equity like investment in the public market.

Wood continued; we wanted to become a part of the innovation communities including artificial intelligence (A/I), electric vehicle, and block chain technology, interact with them and bring them into our research ecosystem. Changing the way research departments were historically set up was a necessity when innovation is the overriding strategy. The standard investment analyst setup is one in which the analyst specializes on one or two sectors. A siloed approach is not conducive for analyzing innovative companies. For example; what sector should companies providing autonomous taxi networks be allocated to? There is no one sector that makes sense. This type of company innovation cuts across the robotics, A/I, and alternative fuel sectors. Technology is leveraged by all sectors and as a result specialized research will be at an investment disadvantage.

Kastholm asked if ARK should be considered a contrarian type investor. Wood advised that ARK encourages companies to forgo earnings and dividends so that all earnings go into their next big idea in order to capitalize on exponential returns – think Tesla and formerly Amazon. Traditional research frowns on foregoing current earnings. Since ARK has a long term time horizon it is well suited to invest in the type of firms that are willing to take a longer term view.

Wood explained one of the key metrics used at ARK for analysis is Wrights Law which is a relative of the Moore’s law but is a better analytic tool. Wright’s Law is based on a function of units while Moore’s Law is a based on a function of time. Wright’s Law states for every cumulative doubling in units produced costs decline at a consistent percentage rate. Using battery technology as an example; for every cumulative doubling in the number of batteries produced (for electric cars), battery costs decline by 18%.

Identifying exponential growth rates (in the battery example case negative expense growth) is the first step in determining investability at ARK. Next is asking if the technology ready for the mass market at an acceptable price, what Wood calls being ready for prime time. Investing too soon in the next big idea will provide spectacular losses. Wood gave human genome sequencing as an example of the wrong and right time to invest in innovation. When the human DNA was first sequenced in the early 2000’s it cost over $2B and years of computing power. Today an individual’s DNA can be sequenced for around $1,000 with costs projected to be near $100 in the next five years. Costs in this range provide for an array of possibilities; fighting cancer when it is in stage one or identifying other illness’s before they manifest into costly situations. This technology is ready for prime time.

Given the recent market gyrations Kastholm asked what has been the history of ARK’s performance in up and down markets. Wood advised that during the early stages of a downturn the strategy will underperform. Most of ARK’s holdings are not in any benchmarks. When large downturns occur, the asset management world will unload securities not in the relative benchmark more so than holdings that are benchmark held. As a result the non-benchmark held securities will be artificially discounted providing for larger upside potential. Innovation always gains accelerated market share during risk off periods when the market is shaky. Companies that play into the current market environment are online education and digital work life companies. Less obvious investment plays are the back end infrastructure companies that support the online / digital work life companies that are increasing their on-line scale.

ARK is somewhat unique in that it provides all of their price assumptions on GitHub. ARK’s assumptions are there for your analysis should you want to see how they expect Tesla is to provide ~50% annualized growth over the next five years. ARK’s five year target is $6,800 whereas the current price is around $844.

Tesla is a perfect example of the arbitrage between short term (conventional analysis) and long term (ARK) analysis. Ms. Wood pointed out in the not too distance past the fear was Tesla would run out of cash. This fear had little merit as Tesla could tap the capital markets if need be. Markets were in good shape to supply more capital if it was asked for. There were a number of other issues that were brought up by conventional research analysts; battery range – too low, scalability – not good enough, the elimination of subsidies on electric vehicles – prices Tesla out of the market. But as we fast forward to present day, Tesla turned the tables touting several barriers to entry; balance sheet is strong vs. traditional auto manufacturers, battery technology is more advanced, A/I chip technology is superior, and over the air updates are best in class. Their single focus on electric vehicles has provided these competitive advantages and has put Tesla in place for exponential growth vs. any other electric or conventional car manufacturer.

Wood noted that the investment management industry has been going through its own version of disruptive innovation with movement from active to passive management and fee compression. These innovations are being led by a few of the (super) large investment firms. However, going forward the biggest risk to investors is to be invested in passive investments. The biggest disruptions that will occur in the economy will impact the stocks that have large valuations. These companies have dominate positions in many of the popular benchmarks. These companies will suffer at the expense of smaller more innovative companies that typically are not listed in benchmarks until after they have a significant track record.

Wood was asked her thoughts on what kind of recovery she expects. Setting aside a relapse of Covid-19, Wood expects a V shaped recovery. The reason is that companies in general have not built their inventories – there is a tremendous shortage of product, while consumers have built their savings. These two situations will lead to outsized growth in the coming quarters.

Wood was asked about notable investment losses. She brought up the Mexican Tequila crisis of 1994 where the peso was devalued vs. the dollar. Leading up to the devaluation the Mexican government insisted that there would be no devaluation. However global markets were pricing in devaluation and ultimately the Peso was devalued which led to further market depreciation. The lesson here is while any government can say they will not take an action but the market says something else, believe the market. What political leaders say should be discounted.

The on-line audience was given the opportunity to ask questions:

Q – How do you account for the disposal of lithium batteries (especially with regard to Tesla)?

A – A 10 year old Tesla battery is no longer efficient from an auto perspective – disposal costs could be high. However, these batteries are coveted by the utility industry. Utilities buy these batteries in lieu of building peaker plants – power plants that generally run only when there is a high (peak) demand for electricity. These batteries can help top off utilities need at peak times thereby eliminating the need for expensive peaker plants. Wood believes that the battery in a 10-year-old Tesla Model S will be worth more than an equivalent aged Series 7 BMW!

Q – What issues will play with the shortage of Lithium (used in electric car batteries).

A – Lithium is not in short supply. However, it just takes time to build Lithium mines – up to three years. Most of the electric battery manufacturers have taken long term steps to secure the supply of Lithium.

As an aside Cobalt is a more of concern in battery technology. Cobalt is a rarer element and is mined mainly in the Congo which is notable for human rights abuses. Tesla has laid out a long-term goal is to eliminate its use of Cobalt.

Q – Can you speak to your engagement with the investment community? How do you engage with company management?

A – By design ARK engagement with company management is not a frequent as the traditional analyst space. When company business development wants to have conversations about their long term ideas is when ARK wants to have more interaction. These types of conversations are focused on potential products and innovation, not management’s expectation of the next quarter’s quarterly earnings.

Engagement with clients comes in several forms. ARK provides a weekly list of holdings that had a significant rise/fall in stock price over the previous week. Holdings are displayed at the end of the day and trades are also shared. Providing this level of information gives ARK’s clients a great sense of what ARK is doing in total and at the margin.