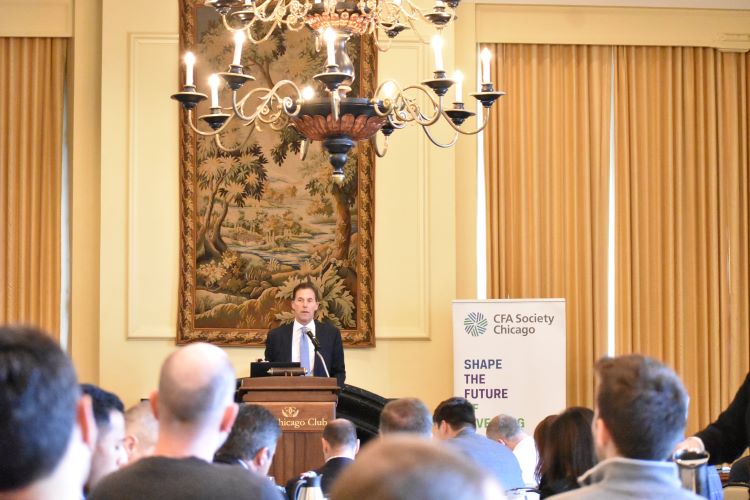 Curt Bailey, president for Related Midwest, was the presenter at CFA Society Chicago’s last Distinguished Speaker Series luncheon on November 20th. Related is one of the nation’s largest property development firms and Bailey’s talk introduced the firm and gave an overview of Chicago’s property market.  “We create and transform neighborhoods in Chicago,” he said, “[and] place-making is critically important to us.”

Bailey then gave a tour of Related’s recent developments in Chicago. The Park Tower at 800 N Michigan is one of them, as is One Eleven and 500 N Lake Shore Drive. They are doing a landmark building in the West Loop called One Bennett Park, as well as 340 on the Park. They also have a proposed building at the former Chicago Spire site at 400 N Lake Shore Drive, and another at 725 W Randolph that will feature an Equinox gym and a few other amenities. Bailey said that figuring out what kinds of amenities residents will demand is often a challenge, citing examples of movie rooms being less successful and gyms being more desirable.

Related is a leader in 80/20 developments, where 80% of a building is rented at market rate, and 20% is reserved for affordable housing. Their development at 900 W Randolph will be among the first 80/20 buildings built since Presidential Towers in the West Loop. Related is also working on an affordable housing project at the former Lathrop Homes site at Diversey and Damen.

Their flagship development is called The 78, which is a play on the 77 neighborhoods for which Chicago is famous. The 78, a proposed project in the South Loop between Roosevelt and Cermak, may go down as one of the largest developments in Chicago history. Among its potential tenants includes a new tech center from University of Illinois that will seek to offer a tech hub for recent grads and researchers that will keep technologists in Illinois after graduating. One unique aspect of the development is that it will feature an all-timber building, which was recently approved by the Chicago Fire Department. The development will create 30,000-40,000 construction jobs and hundreds of millions in tax revenue.

One audience member asked Bailey about how Chicago’s difficult financial picture factors into their development plans. Bailey responded that he “vacillate[s] between optimism and total fear on a near hourly basis.” Chicago is still a competitive destination for recent college graduates given the lower cost of living versus New York, San Francisco, Boston or Los Angeles, and those types of young professionals Related seeks to attract don’t seem to be bothered by Chicago’s ongoing pension crisis. Despite the city’s financial problems, “it’s still going to be cheaper for companies to hire smart workers in Chicago than in New York or Boston,” Bailey said. This labor competitiveness gives him some comfort, despite challenging times for the city and state.

Another question came regarding the possible effect of WeWork’s troubles on the Chicago real estate industry. Bailey said that they lease just 1 million of a total 140 million square feet of office space in Chicago, so the effect of their stumbles on the market will likely be muted. He does believe that the co-working trend is here to stay and has seen companies request this in many developments. He noted that Regus had already been doing what We Work is offering for many years and had several difficulties and reorganizations during financial downturns, which made him somewhat dubious of the WeWork model in the first place.