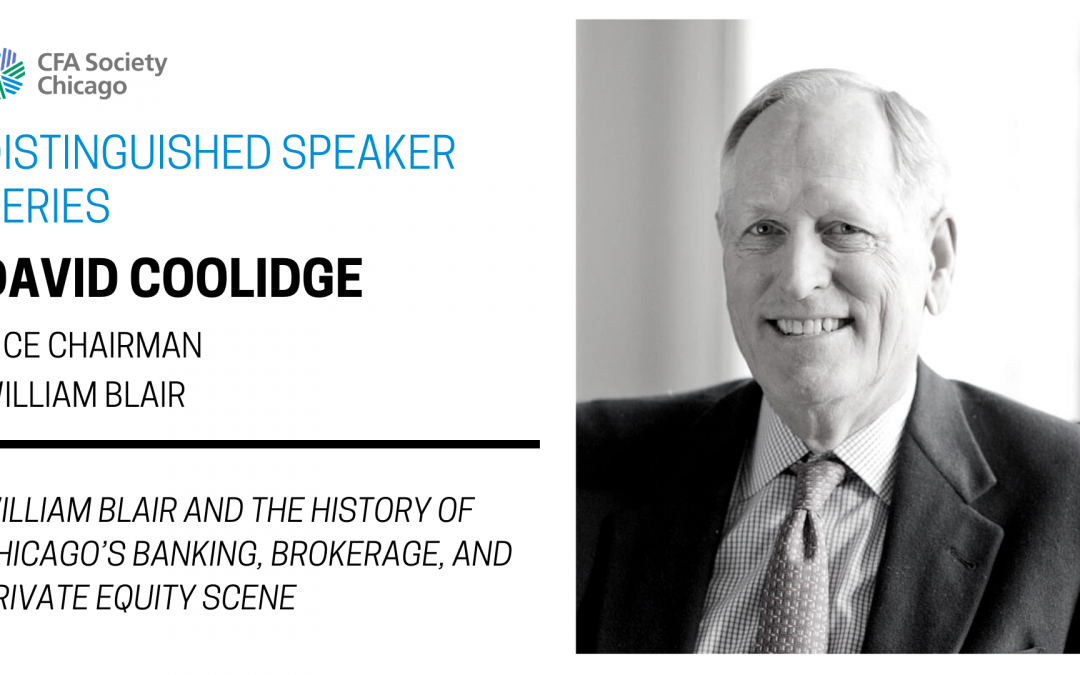 On May 4, 2021, CFA Society Chicago members gathered by video conference for a wide-ranging survey of the history of the banking and brokerage business in Chicago from the perspective of David Coolidge of William Blair & Company. Coolidge, currently vice chairman at Blair, has spent his career of more than 50 years at the firm. He worked primarily in the Corporate Finance Department, managing it from 1977-1994, and served as CEO of the firm from 1995-2004. Coolidge had a front row seat to the major changes that transpired in the world of corporate finance in Chicago over the past half century, and provided participants with some insightful analysis of those changes.

When Coolidge entered the world of corporate finance in 1969, commercial banks dominated the business. In Chicago, the biggest were First National Bank and Continental Illinois National Bank & Trust. They had close working relationships with large corporations that relied on them, rather than the capital markets, for financing via loans. Their trust departments were also the predominate local asset managers. Illinois, however, was a unitary banking state, meaning banks were limited to just one branch or banking subsidiary. This protected small banks from competition from the large Chicago banks, but also held back the latter from growing big enough to challenge the largest U.S. banks in New York and California. This environment began to change when large foreign banks entered the US market and bought up local firms. The first one of significance in Chicago came in 1979 when the Dutch bank ABN Amro bought LaSalle National Bank, the fifth largest in the city.

In 1984 the Bank of Montreal acquired third-ranked Harris Trust & Savings Bank. In both cases local management remained in place and the banks operated fairly autonomously. The fourth-ranked bank, Northern Trust Company, remained independent due to a controlling interest from the founding Smith family, and its focus on serving narrowly targeted markets: high net-worth personal clients and institutional asset owners.

In 1982, Continental Illinois suffered huge losses from the sharp fall in oil prices. The bank had overinvested in loans in the sector that went bad. Federal regulators took over the bank and separated out the worst assets, but the surviving entity was permanently impaired. It survived until 1994 when, after the advent of interstate banking, Bank of America bought it up and converted it effectively into a branch.

In 1995, First National Bank, trying to maintain somewhat independent, arranged its own merger with National Bank of Detroit, forming what was termed a “super-regional” bank (very large, but based outside New York). It didn’t last long. By 2004, after two more mergers, it had been swallowed up into JP Morgan.

Coolidge then took a similar look at the changing nature of the investment banking business over the same period. In the 70’s, numerous firms called Chicago home. Besides Blair, the list included AG Becker, Bacon Whipple, Blunt Ellis & Simmons, and Chicago Corporation—but the 1970s was challenging for them. Inflation was high, interest rates rose, and equity markets struggled. A sea change came in 1975 with the end of fixed rate commissions on stock trading. Competition drove commissions down, lowering marginal revenue, but also boosted trading volume, increasing operating costs. Mergers and consolidation ensued, and eventually, among the list of Chicago firms, only Blair remained independent.

Coolidge attributed Blair’s independence to its partnership structure and unique management process. The partnership structure has a self-regulating effect because the owner/managers have their own wealth tied to the firm’s success. This limits risk taking. In addition, ownership interests are spread widely across the firm. Blair requires partners to relinquish their capital (at book value) to younger, rising partners. This is a boon to attracting and retaining talented employees: good talent is eager to join the firm, and reluctant to leave. Today, although many refer to Blair as a “regional firm”, Coolidge considers it a premier global boutique. It operates, via branches or affiliates, in seventeen countries and books 40% of revenue in foreign countries.

Coolidge continued with a brief review of the history of Chicago-based exchanges. The Board of Trade and Mercantile Exchange both date to the nineteenth century and started as places to trade derivatives based on a wide range of agricultural products. Both had huge successes with financial derivatives after 1970. They were also affected by the same consolidation forces as banks and brokerages, and they merged in 2007.

Finally, Coolidge took a look at the corporate finance business where he spent most of his career. Blair has been involved in underwriting equity placements since its founding in 1935 as Blair, Bonner & Company. They focused on issuing public equity for small growing businesses, and developed a reputation for bringing to market companies that performed especially well after going public. The environment began to change after the Sarbanes-Oxley (SOX) law was passed in 2005. The effect of the new rules and regulations was to increase the cost of IPO’s, driving small firms out of the market and toward private equity. Blair has been successful at following this trend.

In summation, Coolidge quoted the firm’s founder, William McCormick Blair, in providing the company’s guiding principal for success: “When our clients succeed, the firm’s success will follow”. He added his outlook for technology to drive the industry in the future and force further change on the business. The incumbent firms will have to adapt or die off.

What is your impression of SPAC’s (Special Purpose Acquisition Companies)?

What skills and attributes do you seek in hiring people?

Hiring new employees is the lifeblood of a business. The most valuable qualities in candidates are intellectual capacity, integrity, articulation, and especially salesmanship.

What is your outlook for Chicago?

Chicago is different from other Midwestern cities in that it has always enjoyed a mixed manufacturing and service economy. This was an advantage as manufacturing left the region. However, the fiscal and budget problems of the city (and state) are a heavy burden on the economy. They must be addressed or the city will decline.

Do you expect to see more consolidation among financial service firms?

Probably not. The largest firms (universal banks) are so big now, the regulators won’t allow them to grow by acquisition any further. Only smaller ones will combine but they won’t be big enough to have much of an impact.

Some are (such as Blair, Nuveen, and the hedge fund Citadel) but the list is shrinking (e.g., the former bank trust departments are mostly gone). The successful ones will have to excel at active management.

What is the effect of Fin Tech on the business?

It signifies that change is ever-present, but is both a constant threat and an opportunity.

Which areas of the business present the best prospects for people entering the field now?

Focus instead on what you most enjoy doing and apply your passion there. Don’t try to pick a hot area.

How did your experience in the Peace Corps lead to you career in finance?

The Peace Corps had a small business development program. Since Coolidge had an MBA prior to volunteering, he applied his knowledge to that program while serving in Colombia.

What are the prospects for people to return to working in offices—at Blair and generally?

Hybrid and remote working are here to stay. People have learned how to use them in the past year with success. Meeting by video conference (both internally and externally) will also remain. In fact, meetings held in person will probably include a remote option as a standard feature to offer flexibility to participants.

Is momentum swinging back in favor of IPOs vs. private placements?

Yes, but mainly for firms with large market caps that allow them to bear the higher cost. Some small, but fast-growing firms (e.g., Tech) may also be able to avail themselves of this option.

Which financial shock during your career was the most memorable or challenging?

None really stands out because Blair has been such a solid performer, suffering only one annual net loss over Coolidge’s whole career. The fact that it operates on an agency basis—carrying no large asset positions—has protected it from periods of sharp market declines.

How much capital do SPAC’s have to invest relative to Private Equity funds?

Coolidge is skeptical of SPAC’s, considering them to be aggressive, “hot money”. He sees them as a fad likely to fade. Private equity is tried and true, offers better diversification, and has proved its staying power.

Are there systemic risks from positions at hedge funds?

It’s impossible to say without inside knowledge of their holdings.

Blair embraces active portfolio management. How has the rise of passive investing affected the firm, and what asset classes offer the best return prospects now?

Active management is challenged by the decline in the number of public companies by about one half in recent years. The rise of SPAC’s and Private Equity has contributed to this trend. Blair has offset this to some degree by investing more in foreign markets, but superior returns were easier to generate there in the past. The challenge to active managers remains.