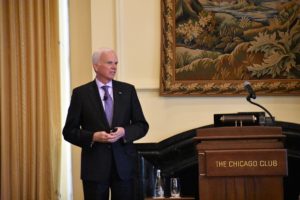 June 14th at The Chicago Club, Dean Harrison, president and CEO of Northwestern Memorial HealthCare (NMHC) shared his story of leading a local organization from good to great. Since taking the helm in 2006, he has led a powerful transformation. Already boasting the top-rated Northwestern Memorial Hospital in Chicago, NMHC has significantly expanded its health system to include over 100 diagnostic and ambulatory sites and seven hospitals across Northern Illinois.

The full story, however, is much broader than just the growth of the hospital system. It is about doing so for the right reasons. It is about providing state of the art care to serve patients better. It is about research, a better academic health system, a relentless pursuit of better medicine. It reflects a vision of transforming healthcare, integrating the many parts of the system. It involves the creation and success of Northwestern Medicine. The full story reveals how to achieve spectacular results through properly applying strategy with financial discipline on top of solid fundamentals of the right culture, people and resources.

Northwestern Medicine (NM) reflects the shared strategic vision and collaboration of NMHC and Northwestern University Feinberg School of Medicine to develop a premier, integrated academic health system. NM employs 33,800 across the interconnected spectrum of healthcare, education and research with notable honors and accomplishments including: 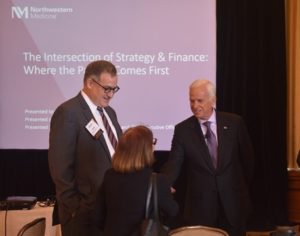 NM has over 20 years of AA-rated financial performance. This is most impressive considering the financial success occurred coincident to a tremendous period of expansion: the large investments in research, rapid growth of the health system, and consequent integration of diverse medical practices as well as alignment with academia. Never losing sight of its mission, none of the above would matter had NM not first and foremost maintained its ability to uphold its standard of exceptional care for patients.

As Harrison took us through the journey from good to great, it became clear that a focus on excellence resonated every step of the way. However, while the path was not necessarily straight, there was never any wavering on the criteria of patients first. How to deliver exceptional care where patients want to receive it was at the core of all of NM’s strategic priorities.

Staying true to the long-term strategy, supported by shorter term business plans responsive to the evolving market were fundamental to the journey. For example, the importance of having medical information available in all locations required installing an integrated electronic health record system. Doing so in the same year as opening a hospital was a particular challenge, but one that was not optional as it was imperative to introduce the new system quickly to satisfy the expectations of both patients and providers. 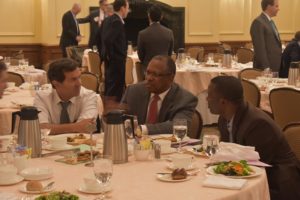 Throughout NM’s growth, applying a disciplined approach to expansion, while implementing a rigorous and consistent integration process was essential to achieving success. Of course, a large part of NM’s success comes from people, both within the organization and outside in its partnerships with donors and others in the community. NM instills a single culture across all of its locations and partnerships. They have made a large investment in people. Harrison commented how NMHC management is strengthened by frequent exposures to new roles and assignments within other parts of the organization as evidenced by an average of 14 years of service across senior leadership with an average of 3 years’ service in a current role. Developing people, the right culture, and nurturing resources are very important to the NM success journey.  Their upcoming priorities include:

Philanthropy has been a key part of the good to great story. Areas in which achievement of NM’s strategic vision has been supported by donations while also giving back to the community in terms of jobs, improved care and outcomes in recent years include: 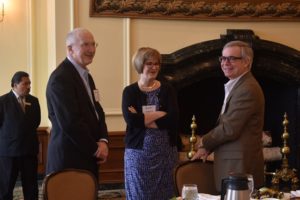 To bring it all together before taking questions,  Harrison showed a brief video about a patient with a successful outcome to a spinal injury that demonstrated the positive impact the integrated system is having on the community.

In conclusion, the good to great story of Northwestern Medicine is a collaboration of employees, students, physicians, scientists, and the community all the while keeping the interests of the patient front and center. Although the journey is continuous, NMHC has achieved tremendous recognition becoming both a local and national center for healthcare, research, education and community service.