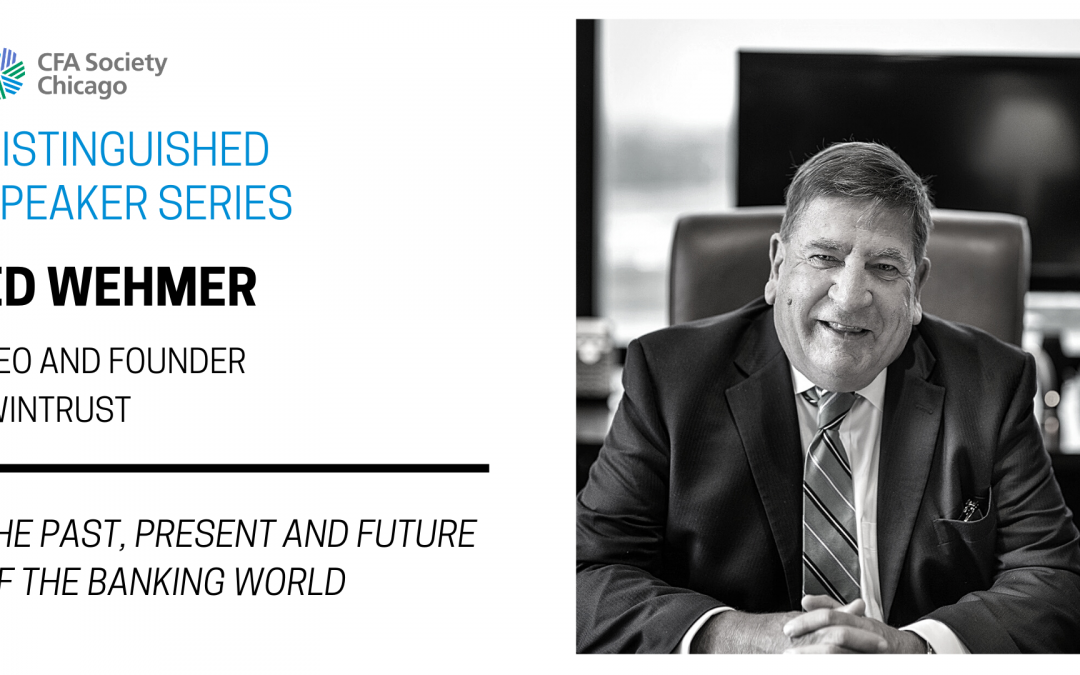 On the day after Election Day, Nick Vassilos, CFA, from Charles Schwab remotely interviewed Ed Wehmer, founder and CEO of Wintrust Financial. Thirty years ago, Wehmer recognized a market opportunity in a mostly commoditized banking industry. He designed a culture and implemented a philosophy that has allowed Wintrust to grow from one branch in Lake Forest in 1991, into one of the top 50 banks in the country today with a retail footprint in Chicago, Southern Wisconsin, and Northwest Indiana.

During CFA Society Chicago’s webinar, Wehmer and Vassilos discussed politics, regulation, and monetary policy in relation to the banking industry. He began with a brief history of Wintrust and discussed what has made the lender successful over the years. The discussion wrapped up with Wehmer offering his own leadership advice.

Starting with politics, the Illinois Fair Tax Amendment failed. As of November 4th, it looked like the Republicans would retain control of the Senate. These results were a relief for Wehmer as a Republican majority Senate would likely limit unfavorable regulation and reduce the chances of higher corporate and individual taxes. “Holy Crap,” exclaimed Wehmer when he considered the prospect of Elizabeth Warren as the Secretary of the Treasury, a prospect which would be more likely with the Senate in the hands of the Democrats. So, though he saw a divided Congress leading to four more years of partisanship and bickering, this seemed preferable to Democrats controlling the House, the Senate and the White House.

Wehmer could not understand why Elizabeth Warren and some of her progressive colleagues “hate banks.” The Payroll Protection Program (PPP) would not have been possible without Wintrust and other lenders implementing this initiative. Over seven days, Wintrust built a system from scratch to administer the program, launching on time while some larger banks were not ready on day one. Three thousand applications were received within the first 45 minutes. Wintrust lent $3 billion in the first round of PPP and Wehmer anticipates another round of the program for which Wintrust could lend another $1 billion. In addition to another PPP phase, he assumes we will see another wave of $1,200 stimulus checks as part of COVID economic relief.

Regarding Monetary Policy, Wehmer sees low interest rates for a long time. The Treasury can’t afford for the Fed to raise interest rates. Even in a low rate environment, Wintrust can grow its Net Interest Margin (NIM) from 2.60% to 2.75% by deploying excess liquidity. Rates at such a low level have been a boon to the mortgage business, which is healthy and additive to overall results. Wehmer would not want to see interest rates fall further, adding that “negative rates would be a disaster.” Wehmer seemed to make a soft forecast that inflation is on the horizon, believing that there is in fact too much money chasing too few goods. Reflecting this forecast, Wehmer is allocating more of his personal portfolio to real assets, having just bought his second farm.

The most compelling segment of the discussion was a review of Wintrust’s history and an explanation of what has made the bank successful. Wintrust was launched in 1991 with one branch, in Lake Forest. Wehmer was trying to do business on the first day, before the furniture was delivered, so he asked his wife to drop off a card table and some folding chairs. Repeating such a start-up feat with a one-branch de novo bank would be almost impossible today. That first branch was funded by $6 million of capital. It would take closer to $50 million of capital to fund a new bank today. Similarly, the required spending on digital capabilities and information systems would be too onerous for any single branch operation to shoulder.

Wehmer summarized Wintrust’s model as “high-touch” and “high-tech.” The differentiator versus other banks is personal service. Though Wintrust is rarely the cheapest option, customers are treated very well. Wintrust added 1,000 new Small and Medium Enterprise (SME) customers in 2020, largely as a result of efficient processing of PPP loan applications, its customer service, and the capacity to make loans. Wintrust has grown assets by $10 billion in 2020 alone, to $44 billion in total.

Additionally, customers view Wintrust as a local bank, with the staff very involved in their communities. Over 400 employees serve on local boards and the Wintrust brand is visible through its sponsorship of the Cubs and White Sox.

Wintrust has outperformed peers on these three measures by 40 to 50% over the last ten years, according to Wehmer. Many banks can achieve impressive earnings and asset growth, but must rely on inorganic acquisitions to do so. Acquisitions however, typically erode tangible book value. Wintrust has generally grown organically, therefore avoiding dilution of tangible book value. That said, Wehmer would like to expand geographically, further into northwest Indiana, into northern Wisconsin, around St. Louis, and up through Des Moines toward Minneapolis. Rather than making large acquisitions to achieve this expansion, Wehmer would prefer to buy small banks in new territories, and then grow organically off that base.

A final success factor for the bank is disciplined underwriting on a diverse loan portfolio. One-third of the portfolio has zero loan losses. Wintrust’s loan loss provision is a fraction of the median bank provision ratio of 1.55%

The ease with which the business is functioning with most associates working from home during COVID has been a pleasant surprise. The high volume of mortgage and PPP loans are being processed smoothly.

As the conversation drew to a close, Wehmer was asked to share advice with the audience. For bankers, he stressed the importance of diversification and maintaining conservative liquidity. Wintrust’s maximum loan to deposit ratio is 85 to 90%. Wehmer cited the Continental Bank failure as one caused primarily by insufficient liquidity, rather than poor underwriting. When analyzing a bank, make sure to meet the management team on site. Learn their history and philosophy. Ask what policies have changed over time.

For his general leadership advice, which reflects Wintrust’s culture, was stated rhymingly:

Take the Blame. Be accountable as a leader.
Share the Fame. Recognize those who contributed to your achievements.
Avoid the Shame. Don’t take shortcuts. Ask what the following parties would think of your actions: your mentor, the media, your mother, your Maker.
Enjoy the Game. Find a work-life balance. Don’t be a workaholic.

Wehmer sees a positive outlook for organic growth for Wintrust. His view on politics, regulation, and interest rates is neutral to slightly positive for the industry. Wintrust’s high-touch model will allow the bank to grow faster than GDP, as the bank continues to take share from larger competitors who are not as focused on customer service. Wintrust has grown from one branch in 1991 into one of the top 50 banks in the US today. The bank did this through delivering personalized service, being visible and active in their communities, investing consistently in technology, maintaining a diversified portfolio of loans, and avoiding costly acquisitions. As Employee #1 in 1991, Ed is responsible for both defining the culture of Wintrust and managing the amazing growth over the last thirty and the future thirty years.