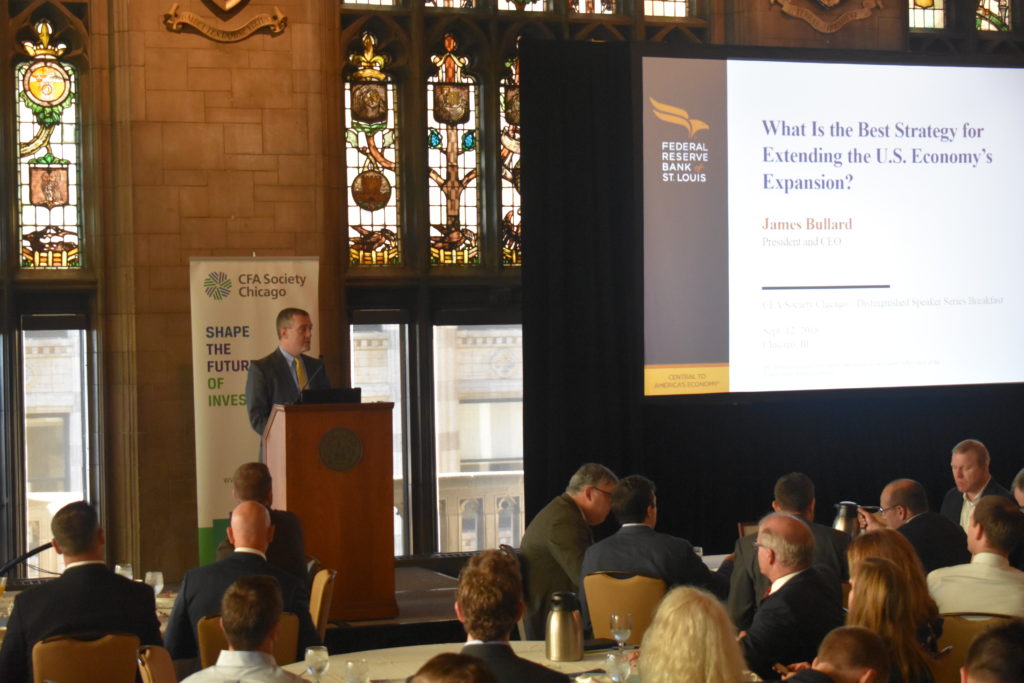 The focus of the discussion explored a possible strategy to extend the U.S. economic expansion. Bullard noted that historical signals used by monetary policy makers have broken down, specifically the empirical Phillips curve relationship. As a result Bullard suggested putting more weight on financial market signals, such as the slope of the yield curve and market -based inflation expectations. Handled properly, these signals could help the Federal Open Market Committee (FOMC) better identify the neutral policy rate and possibly extend the U.S. economic expansion.

Following are excerpts from Bullard’s presentation “What Is the Best Strategy for Extending the U.S. Economy’s Expansion?”

Once inflation expectations stabilized around this international standard, the empirical relationship between inflation and unemployment– the so called “Phillips curve”–began to disappear. Bullard provided a chart showing the slope of the Phillips curve has been drifting toward zero since the 1990’s and has been close to zero for the past several years.

The conventional wisdom in current U.S. monetary policy is based on the Phillips curve and suggests that the policy rate should continue to rise in order to contain any increase in inflationary pressures. However, in the current era of inflation targeting, neither low unemployment nor faster real GDP growth gives a reliable signal of inflationary pressure because those empirical relationships have broken down. Continuing to raise the policy rate in such an environment could cause the FOMC to go too far, raising recession risk unnecessarily.

Given that, Bullard suggested using financial market signals such as the yield curve as an alternative to the Phillips curve. The slope of the yield curve is considered a good predictor of future real economic activity in the U.S. This is true both in empirical academic research and in more casual assessments. Generally speaking, financial market information suggests that current monetary policy is neutral or even somewhat restrictive today. Specifically, the yield curve is quite flat, and market based inflation expectations, adjusted to a personal consumption expenditures basis, remain somewhat below the FOMC’s 2 percent target. Financial market information also suggests the policy rate path in the June 2018 summary of Economic Projections (SEP) is too hawkish for the current macroeconomic environment.

More directly emphasizing financial market information naturally constitutes a forward looking monetary policy strategy. One of the great strengths of financial market information is that markets are forward looking and have taken into account all available information when determining prices. Thus, markets have made a judgment on the effects of the fiscal package in the U.S., ongoing trade discussions, developments in emerging markets, and a myriad of other factors in determining current prices.

Financial markets and the Fed

Financial markets price in future Fed policy, which creates some feedback to actual Fed policy if policymakers are taking signals from financial markets. This has to be handled carefully. Ideally, there would be a fixed point between Fed communications and market based expectations of future Fed policy, i.e., the two would be close to each other. Bullard said that generally speaking, markets have currently priced in a more dovish policy than indicated by the FOMC’s SEP – they expect the Committee to be more dovish than announced but still not enough to achieve the inflation target.

Financial market information is not infallible, and markets can only do so much in attempting to predict future macroeconomic performance. The empirical evidence on yield curve inversion in the U.S. is relatively strong, and TIPS -based inflation expectations have generally been correct in predicting subdued inflationary pressures in recent years. Therefore, both policymakers and market professionals need to take these financial market signals seriously.

Bullard suggested that yield curve inversion would likely increase the vulnerability of the economy to recession. An inflation outbreak is possible but seems unlikely at this point. By closely monitoring market based inflation expectations, the FOMC can keep inflationary pressure under close surveillance. In addition, financial stability risk is generally considered moderate at this juncture. Arguably, these are being addressed through Dodd-Frank and related initiatives, including stress testing.

The current expansion dating from the 2007-2009 recession has been long and subdued on average. The slow pace of growth suggests the expansion could have much further to go. The strong performance of current labor markets could entice marginally attached workers back to work, increasing skills and enhancing resiliency before the next downturn.

Another long standing issue in macroeconomics is how to think about parameter uncertainty, or more broadly, model uncertainty. Bullard pointed to two studies: Brainard (1967) suggested that when model parameters are in doubt, policy should be more cautious than otherwise and, Hansen and Sargent (2008) suggested that, in some cases, policymakers might want to be more aggressive than otherwise. This is an unresolved issue, but how to handle parameter uncertainty has been a concern for the FOMC for years.

Bullard re-iterated his position stressing that U.S. monetary policymakers should put more weight than usual on financial market signals in the current macroeconomic environment due to the breakdown of the empirical Phillips curve. Handled properly, current financial market information can provide the basis for a better forward-looking monetary policy strategy. The flattening yield curve and subdued market-based inflation expectations suggest that the current monetary policy stance is already neutral or possibly somewhat restrictive.