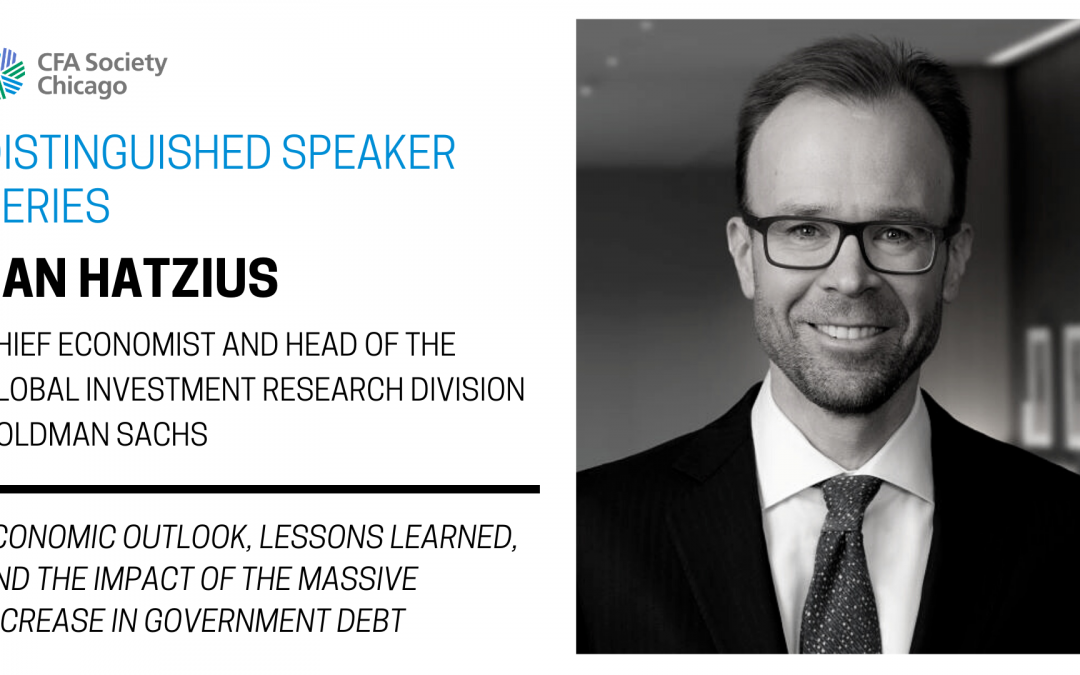 He noted that generally Goldman Sachs is more optimistic on global growth rates than the broader economic consensus. They are not as concerned about inflation and believe we will not see rates beyond what the central banks are targeting. Further, given the current economic growth and low interest rates there’s a lack of a concern about government debt levels.

Hatzius noted their strong view of U.S. growth was centered around three primary factors:
• The significant progress relative to the virus. They believe that with the combination of vaccinations and people who have previously recovered from the virus that we are rapidly approaching herd immunity. This will be particularly important for industries that require face-to-face interaction which will lead to some of the biggest gains in hospitality, travel, restaurants and entertainment in 2021, with slower growth in 2022.
• The massive, and front-end loaded fiscal stimulus from CARES Act, Coronavirus supplemental bill, American Rescue Plan, American Jobs Plan & American Families Plan. Combined they believe these represent approximately 12% of GDP in 2021, which will then fall to about 4% of GDP in 2022 as growth will be driven more by the economy than stimulus. As for deficits, Hatzius is not as concerned, as they are not expecting double-digit deficits to continue in the long term.
• The continued easing in financial conditions, with low interest rates, supportive exchange rates and stock prices.

Transitioning from 2021 to 2022, Hatzius noted that with the fiscal stimulus expected to decrease from 12% of GDP to 4% of GDP, this spending would be made up by a release of pent-up demand from savings achieved by consumers during the pandemic which will be spent as we emerge from the epidemic. Goldman Sachs believes they are conservative in assuming 30% of savings will be spent, but much lower than the normal 60% propensity to spend for new income; however, Hatzius noted there are a large range of estimates and a lot of uncertainty surrounding this piece of the recovery.

Hatzius next addressed the concern of inflation given the significant stimulus spending and accommodative policy on the part of central banks. He indicated that Goldman Sachs is not concerned about the recent inflationary pressures continuing for the long-term, believing this is a short-term phenomenon. He indicated they see only 1-2% “overheating” of potential GDP, which might create a 10-20 bps impact for higher core inflation. Overall, this should not result in the economy getting much past full employment. Short term, there are signs of labor supply shortages and wage inflation particularly at the lower end of the wage scale driven by supplemental benefits. COVID/health fears plus extra benefits have created much higher reservation wage for those making less than $60,000 per year as compared to people with higher incomes. He believes these factors should revert to more normal levels with reduced benefits and improving virus conditions, but there is still room to grow on labor supply.

Hatzius believes that the current core PCE surge is likely to be temporary. Much of the increase in prices is in areas that were previously depressed due to COVID, such as airline tickets or hotel rates, where you are seeing inflation rise from abnormally low levels to more normal levels. On sectors like used cars, where inflation was driven by supply shortages, Goldman Sachs believes this will reverse in the second half of 2021 with decreasing prices, not just lower inflation rates. There is also a comparative impact to abnormally low prices from year ago levels, which makes the inflation rates appear worse. Finally, Hatzius made the point that when trimming out recent increases driven by outliers, the core PCE has been more stable.

Next, we turned to the outlook for Federal Reserve policy. Goldman Sachs’ current view is that the Fed will hint at tapering in the second half of 2021, followed by a year of tapering at a rate of $15 billion at each of four meetings in 2022, with a pause in the first half of 2023 to take stock of the impact of the tapering. He noted that Goldman Sachs believes the initial rate hike will be on the table by the second half of 2023 with the first hike to take effect in the first quarter of 2024. This will be at a time when the economy is at full employment and inflation is at or a bit above the Fed’s 2% target. They believe Fed Funds will reach 3%, which is above the consensus expectation of 2%, highlighting that they believe long-term real rates are too low.

Finally, he turned to the outlook for the stock market noting that Goldman Sachs believes we are in a favorable environment for equities. They are optimistic on growth and inflation but somewhat more conservative on their S&P 500 target of 4,300 and feel Europe and emerging markets present favorable opportunities. They believe the friendly Fed will be positive for foreign currencies so are more bearish on the dollar and expect Euro appreciation as the gap in growth rates begins to diminish.

Speight then initiated a question-and-answer series with Hatzius:

Hatzius noted that retail is still above trend line, but activity is still below trend. This indicates that increases in services consumption my not necessarily come at the expense of goods.

What will be the impact of current debt levels and loose-money policies?

Hatzius noted that it would show up in inflation, but right now Goldman sees the Fed achieving their 2% goal. Given current rates, higher debt levels of 100-130% of GDP are sustainable and could persist at rates up to 2% without much impact on debt service; however, when approaching 3% debt service begins to be problematic.

What could derail the current optimistic forecast?

He responded that virus resurgence would have a big impact, but noted he is expecting a meaningful slowdown in growth already in 2022, with trend going down to ~2% by the end of the year. Without the excess capacity he believes is there, we could see less sustainability of the upswing in growth.

What are your thoughts on the size of the stimulus package and are concerns by some critics, like Larry Summers, overblown?

Hatzius thinks the bill will be closer to $3 trillion versus $4 trillion, but it would be offset by a lot of tax increases. He also noted the spending would likely be spread over a longer period, amounting to less than 1% of GDP over 10 years. Additionally, the tax increases will probably not be as aggressive as proposed. Goldman doesn’t share the concerns of Larry Summers and others, and believes the government is looking at the right things, if the economy were to overheat significantly.

Are you concerned with structural unemployment and the potential mismatch in worker skills?

He responded that the replacement ratio is not as concerning if these things are temporary – at the time, the extra benefits were good policy. He feels the $300 extra benefit now is worse than the $600 last year since labor demand is now accelerating, but these extra payments will go away in the fall. The skills mismatch question is more important longer term, but ultimately changes will not be enormous, rather they would occur more at the margin.

Hatzius put the UK at the top of the list, noting they had some early stumbles with COVID, but are now doing very well with vaccinations. He highlighted the upside in many places, citing Germany as having a little less upside short term but better prospects in the long term and Spain having a lot of excess capacity that could help them grow. Finally, he thinks Asia could be an area of concern as they had done well with the initial response to the pandemic but are now falling behind in terms of vaccinations.