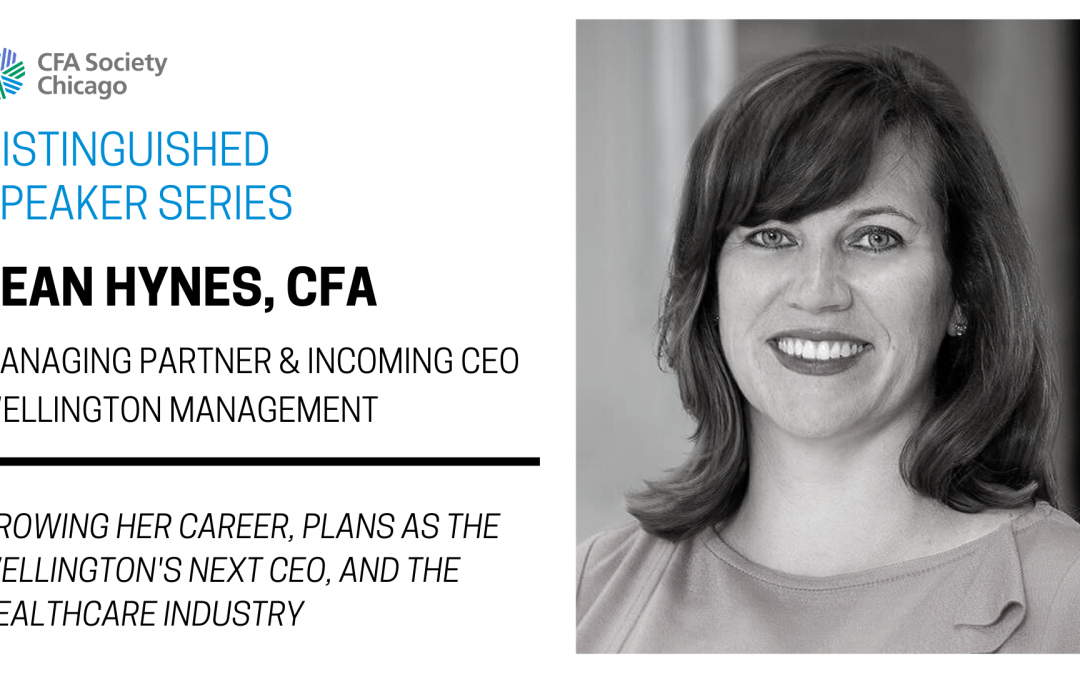 Hynes’ career path was unique. A college internship at a brokerage firm in Boston convinced Hynes to pursue a career in equities. Upon graduation from Wellesley College, she entered Wellington Management as an administrative assistant in the Research Department in the early 1990s. At the time, the renowned firm was overwhelmingly white and male. The odds that the recent graduate would ascend to the top role were lower than the chance that a pre-clinical pharmaceutical molecule would ultimately become a blockbuster. The probability that an administrative assistant would even become a portfolio manager at the firm was quite low.

Mentors and sponsors played a large part in Hynes’ career journey, but so too did her personal traits, or “super-strengths.” An economics professor at Wellesley pointed Hynes towards the business world, telling her that she had a strong aptitude for economics. After eighteen months at Wellington, Ed Owens, a healthcare analyst, asked Hynes to join his team. Hynes would work for her first mentor for over twenty years, ultimately taking the reins of the Vanguard Healthcare fund in 2012, upon Owens’ retirement. Hynes learned that portfolio manager Phil Perelmuter was a behind-the-scenes sponsor of hers within Wellington, at times making sure that she was being paid sufficiently. During her early years at Wellington, Hynes could not look to a senior female investor as a mentor; there were none. However, she found women on the business side of the business to serve as role models.

Hynes reflected on four personal traits (or super-strengths) that have contributed to her success. First, she is very organized. For example, before she accepted the CEO role, she and her assistant mapped out her time allocation for the next year, to give Hynes confidence that she could fulfill the role of CEO, in addition to her responsibilities as a portfolio manager and mother of four daughters. Second, Hynes explained that she is very skilled at leveraging those around her to achieve her goals. Third, Hynes does things her own way and advises others to do the same. Her unique summaries of the Wellington morning investment meetings got her noticed by portfolio managers, including her first mentor, Ed Owens. Finally, Hynes cited the importance of getting sufficient sleep.

Heer asked Hynes her goals for the first 100 days of her tenure of CEO, which begins July 1, 2021. Hynes explained that she will not institute any drastic changes in the first 100 days but outlined two initiatives for her first few years. Initially, Hynes will be very focused on enhancing the skill sets of Wellington’s investors, whose skills must adapt and evolve with dynamic markets. Second, she explained that she will advance Wellington on its journey regarding sustainability. While the company has accomplished much already, it has more work to do, for instance in further integrating ESG into the investment process and philosophy.

Heer prompted Hynes to speak more about Wellington’s ESG / Sustainability achievements. She explained that Wellington are leaders in governance. Their long-standing relationships with companies have made Wellington a trusted advisor to Boards of Directors particularly on matters of compensation and governance more broadly. Hynes also highlighted the company’s climate-oriented research, citing products that incorporate Wellington’s governance work (impact equity and impact bond) and climate work (climate long and climate long/short).

Hynes addressed the topic of diversity and inclusion, stating that an organization needs to be deliberate and intentional in attracting and retaining diverse talent. Today, 30% of the investment platform is comprised of women, and Hynes is committed to increasing that figure. Wellington organizes dinners for female investors, which Hynes believes has encouraged women to participate more often in Wellington’s investment meetings. Hynes’ healthcare team is among the most diverse in the company, with half the team comprised of women. The team is represented by five nationalities and four or five religions, as well.

Hynes applied a lesson from the pharmaceutical industry in analyzing the main challenge of the asset management industry. Like the pharmaceutical industry saw a rapid shift from branded to generic medicines ten-plus years ago, the asset management industry has been experiencing a shift from active to passive assets. Successful pharmaceutical companies innovated value-added therapies, which allowed them to return to growth. Asset managers must similarly innovate to reignite growth and protect margins. Innovation can come in the form of advancing all investors’ investment skills, adding diverse talent, developing deeper expertise in ESG/Sustainability, and offering products that appeal to the market. While Hynes sees speculation at work in a small segment of healthcare stocks, she broadly sees a tremendous amount of value in the industry, which is in early innings of improving the standard of care in many therapeutic areas over the next twenty years.

Hynes offered a view on the healthcare industry and politics/regulation. Drug pricing is an area of unfinished legislation. In Hynes’ view, while the government should permit drug pricing that is sufficient to support further innovation, the biopharma industry must make concessions that expand access to therapies. She predicted that within a year, there would be legislation to reduce the Medicare donut hole, and potentially more encompassing Congressional action. Hynes believes that biopharma companies will see their multiples increase as the market receives greater clarity regarding political and regulatory risks in the wake of enacted legislation.

Jean Hynes entered Wellington Management in 1991 and over the past thirty years, she rose from administrative assistant to healthcare analyst, to portfolio manager, to managing partner, and will soon become CEO of the $1.3 trillion AUM firm. Hynes did not have a female investor within Wellington to look to as a role model thirty years ago. Today, Hynes is a shining example of success to all investors, but particularly to the 30% of Wellington Management’s investors who are female.