Come so far…now the slog 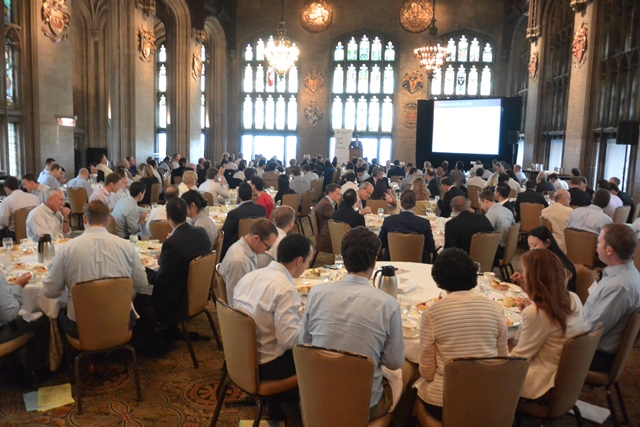 CFA Society Chicago’s Distinguished Speaker Series hosted Jeffrey W. Ubben at the University Club. Mr. Ubben is Founder, Chief Executive Officer and Chief Investment Officer at ValueAct Capital. Prior to founding ValueAct, Mr. Ubben was a portfolio manager at Fidelity and a managing partner at Blum Capital. ValueAct is a hedge fund that invests in companies in fundamentally “good” businesses that are available at depressed valuations. The company typically manages 10-18 investments with total assets over $11 billion.

Although Mr. Ubben’ s hedge fund is located in San Francisco, he spent part of his life in the Chicago area and is a graduate of the Kellogg School MBA program at Northwestern University. His appearance at the University Club was in part a homecoming; his parents were in attendance.

Mr. Ubben began his presentation with three charts that chronicled the history of the debt and equity markets beginning in the late 1970’s to its current state. They were as follows:

The corporate equities and credit market charts illustrated the rapid growth of the equity and debt markets in comparison to GDP. Mr. Ubben blames “fed-induced financial engineering” for the outsize growth of debt.  Historically low interest rates have fanned these flames as companies have gotten a free pass to increase leverage. He lamented the thinking that stocks are the new bonds and feels that stocks are currently priced nearly to perfection. The “Governance Timeline” showed a history of shareholder activism beginning with hostile LBO’s in the late 1970’s to current attempts by shareholders to change the composition of target companies Board of Directors.

Mr. Ubben stated that value investors like him are attracted to what he termed “pain” experienced by many corporations. This “pain” eventually incents corporations to make decisions that will benefit shareholders. His examples of “no pain” were corporate deal making and lavish pay to CEO’s like Google’s Eric Schmidt.

Mr. Ubben briefly discussed three investments recently made by ValueAct in companies currently experiencing “pain”. These were positions in Rolls Royce, Morgan Stanley and Baker Hughes. In each case Mr. Ubben state briefly what attracted ValueAct and what changes were being made to secure a brighter future for each company. Perhaps this was the “slog” he alluded to in the title of his presentation.

The role ValueAct had in the removal of Steve Ballmer from Microsoft was also discussed. Mr. Ubben stated that he merely encouraged management to listen to its major shareholders opinion of Ballmer’s performance. In contrast, Mr. Ubben made mention of Jeffrey Immelt’s action in selling GE Capital’s multibillion dollar portfolio of real estate assets. GE’s share price has since improved markedly.

ValueAct’s investment in Valeant Pharmaceuticals was one of which Mr. Ubben spoke at some length. He was quick to admit that this was an investment where ValueAct had taken its eye off the ball. They were instrumental in the CEO change that occurred in 2008 which brought in Michael Pearson. However, Pearson became very aggressive and this led to bad decision making.

Mr. Ubben reiterated his advice to go where there is dis-investment as this is a place where there are lower costs and lower volatility. It is important to measure the quality of any business versus its valuation. Despite many stocks and industries being priced to perfection, there are still parts of the market where opportunities can be found.