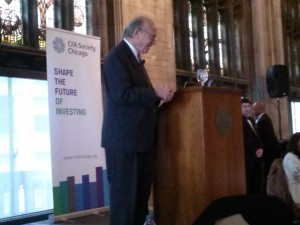 Are stocks overvalued?  Not according to Chicago native Jeremy Siegel.  The Wharton professor and author often described as a “perma-bull” took a sanguine view towards the equity markets in his CFA Chicago presentation, saying that while stocks are the most volatile asset in the short run, they have proven to be most stable asset in the long run, producing an average real return of 6.7% since 1802.

When Dr. Siegel delivered his keynote address to the CFA Chicago Society’s annual dinner in 2011, he described stocks as “undervalued”.  Since then, the S&P 500 has returned nearly 63%.  Slightly less prescient was his prognostication regarding bonds, which he believed to be overvalued at the time.  In his booming, enthusiastic style, Siegel spoke highly of stocks, saying that “In every country in the world, stocks have slaughtered fixed income over the long run”.

One of the most interesting anecdotes Siegel told was around his tenuous media relationship with fallen bond titan Bill Gross.  In Gross’s August 2012 Investment Outlook piece, the former PIMCO portfolio manager wrote that “the cult of equity is dying” and identified Dr. Siegel as the leader of that cult.  “I’ve had my differences with Bill Gross over the years,” Siegel lamented to chuckles in the audience, noting that Gross’s ill-timed call preceded a massive run-up in equity prices.

Turning his attention towards the subject of valuation, Dr. Siegel used the price to earnings multiple over a long time horizon to show that the current market valuation isn’t very far from the norm.  Taking the analysis a step further, Siegel stated that removing high interest rate periods from the PE calculation would indicate an even higher average multiple, suggesting that the market could potentially be undervalued even after nearly doubling from the March 2009 low.  Dr. Siegel then issued a rebuttal to his friend Robert Shiller’s popular Cyclically Adjusted Price to Earnings (CAPE) ratio, stating that in 392 months out of 396 months from 1981 to 2013, the actual 10 year real market returns have exceeded CAPE forecasts.  The CAPE ratio even characterized the S&P 500 as overvalued in May of 2009 when the Dow was at roughly half of its current value.  FASB accounting rulings also affect firm earnings (and thus PE ratios) by requiring firms to write down, but never “write up” investments.  This phenomenon was observed in 2002 due to the acquisition of AOL by Time Warner where the subsequent $99 billion write down produced the largest loss in corporate history, further distorting reported S&P 500 earnings.

Lastly, Dr. Siegel addressed the way the Standard and Poor’s aggregates S&P 500 earnings, saying that the earnings number they report can be wildly distorted due to the firm not cap-weighting each company’s share of profits and losses.  Instead, Dr. Siegel offered National Income and Product Accounts (NIPA) as an alternative earnings measure.  When NIPA earnings are used in the Shiller CAPE ratio, the market shows no overvaluation at all.  Attendees were left with plenty of food for thought around markets and valuation, and Dr. Siegel again delivered an excellent talk.