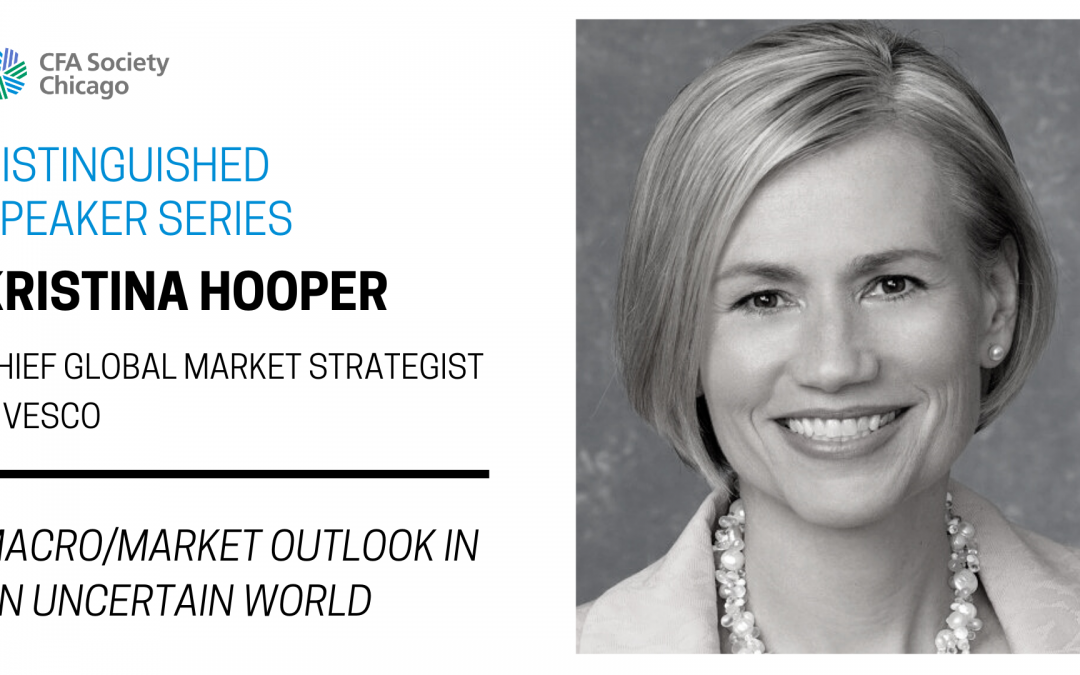 Tracking the pace and control of the COVID-19 Pandemic

Like most investment professionals who have spoken to CFA Chicago in the past couple of months, Hooper has been monitoring the infection rate and using it to synthesize theories about implications and macro scenarios. She kicked off the presentation by sharing slides that demonstrated at a global level how the infection rate in most major economies has plateaued. It is important to keep an eye on this as lockdowns are lifted but civil unrest has been on the rise which could lead to an uptick in new cases. Asian countries with robust contact tracing have been most successful at keeping infection rates at bay. Provided we in the U.S. are able to keep infection rates down, Asian economic data may lend insights into how our recovery will play out in the months ahead. China is an early mover with a V-shaped recovery in motion but they are also suffering from a global economic slow down and the pre-crisis trade war.

A shocking fact that Hooper pointed out is that there has been a full recession’s worth of private spending contraction in one quarter per the Purchasing Managers’ Index (PMI) data. Reflecting the nature of this crisis, service PMIs have been hardest hit in all major economies. She went on to say that turning the economy back on will be slower than and more difficult than turning it off.  With historic unemployment, Hooper expects wage growth to increase reflecting the loss of lower paying jobs. Unemployment could continue at these levels but there could be slow and uneven improvement from here.  It is dependent upon the level of continued fiscal stimulus to keep households and businesses solvent.

Most in our industry are want to know if the recovery will be V-shaped, U-shaped or if we will be slogging through an L-shape scenario.

Will there be a Nike Swoosh or square root-shaped recovery? This is where we start off relatively slow then see an uptick in growth. This is Hooper’s base recovery case which places great importance on not having a second wave of infections and on having stimulus commensurate with the level of downturn.  Her worst case is an L-shape recovery with multiple dip risk (yielding a W-shape) and assumes that the infection rate is not contained. Her best case is a V-shaped recovery with high containment and confidence among household and firms.   She assigns the greatest probability to her best case scenario but that case is dependent upon stimulus providing households and businesses with a high level of confidence.

The U.S. has been eclipsed by other developed countries in regard to the level of stimulus provided. Looking at how other countries handled stimulus during the pandemic, how efficient is the direct stimulus that was provided in the U.S. versus other forms such as tax deferrals and loans? Hooper believes that in general, direct stimulus is the most efficient. She also noted that governmental response is not just about providing stimulus. Some emerging market countries do not have the healthcare infrastructure to manage this in the same the way as countries with developed economies and thus have had limited healthcare responses.

Next Hooper discussed if the CARES Act, representing about $2.9T in aid, is enough stimulus to stabilize the economy. Hooper posits that this act overlooks state and local governments. A significant 13% of all of the jobs in the U.S. are provided by state and local governments. The need for balanced budgets may cause states to make massive cuts unless legislation under consideration is passed to provide additional stimulus. Pivoting to monetary policy, Hooper touched on the large-scale asset purchase (quantitative easing), interest rates pinned at zero and immense liquidity provisions. It is clear that the Fed stands ready to deploy tools to assist our financial markets in any way they can. Other central banks have followed the Fed’s lead with impressive policy action.

Monetary policy accommodation or the “Powell Put” is moving financial markets the most. Losers from the pandemic are those who rely on dividends as firms are forced to make cuts to or eliminate dividend payments. Looking back to the global financial crisis firms were slow to cut dividends. This crisis has moved like wildfire and companies have in turn reacted more quickly. It is also notable that companies are not willing to spend on stock buybacks. Overall though, stocks have done well.

Yields tell a different story than stocks and Hooper relies on the U.S. 10-year Treasury yield to predict short-term economic growth. The recent volatility of the 10-year yield shows that there is some fear. This could change with fiscal policy developments and ongoing healthcare developments to fight COVID-19. Credit spreads have narrowed mostly due to Fed actions. Looking at low yields on a global basis explains why risk assets remain popular. We are in what Hooper describes as an “era of financial oppression”.

A snapshot into the Eurozone reveals that it is under pressure in what has been dubbed as a “Hamiltonian moment”. It is critical for the EU to seize this opportunity to be a fiscal union and not a monetary union. What comes out of this has many implications for moving forward.

The biggest takeaway is that there are many unknowns and thus it is likely that more stimulus coming especially due to this being an election year. Hooper expects the stock market and economy to stay uncoupled but believes the biggest downside risk to the stock market is U.S. China relations and not the economy.

Below are highlights from an extensive Q&A Session Moderated by Jeremy Heer, CFA

How will deflation play out in the medium-term? Monetarists say it is about money supply and the velocity of money both of which dictate inflation. Cash hoarding could happen but will be dictated by consumer and business confidence. Looking to the labor market, wage growth could increase but will not have an impact on inflation because so many are out of work. A different administration from upcoming elections could impact wage growth but not inflation.

When asked if the stock market is in a bubble and what will pop it, Hooper stated that she believes valuations are stretched and that we are likely to see more sideways movement and more volatility driven short-term by U.S. China relations and our unusual environment. Earnings need to catch up which may take some time. However, at the same time, valuations are not predictable in the short-term.

An attendee asked Hooper how she justifies her base recovery case given that the Congressional Budget Office estimates that we won’t catch-up to the previous economic high until 2029. Hooper responded that it is hard to respond to the long-term, but it is really what happens in the short-term that matters. Fiscal stimulus to keep households and firms solvent, infrastructure spending and not increasing taxes are key to her base recovery case.

What does our future economy look compared to our previous economy? Hooper responded that it is highly dependent upon the length of the recovery, the time frame for development of a vaccine and a second wave of infection. A paradigm shift may not happen in every industry but there may be an acceleration of job loss in areas that were vulnerable before the pandemic. Outsourcing is a case in point. Companies are benefiting as travel budgets shift to other areas so there may be a paradigm shift in business travel. A shift of capital expenditures budget dollars to technology should be expected as companies are finding technology essential for productivity and innovation.

What will the U.S.- China relationship look like going forward in light of recent tension? Hooper does not expect a rollback of Phase I although China has taken advantage of opportunities presented over the past month because of expectations that the U.S. will not push back in the pandemic and during an election year. China has also flexed its muscle but because it it’s a campaign year, there are unlikely to be significant actions taken.