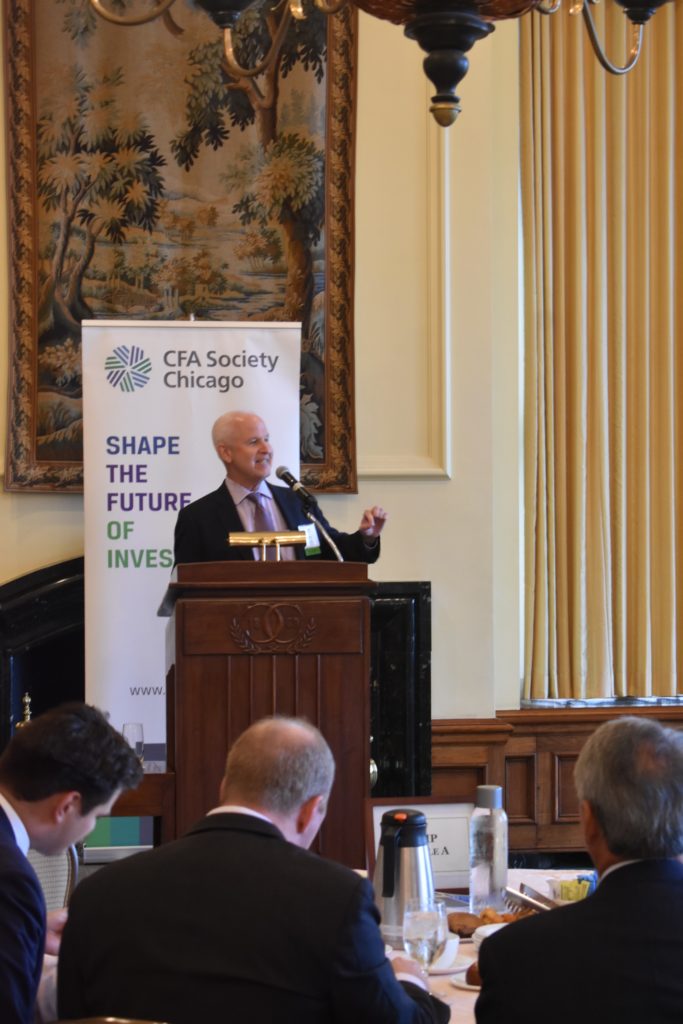 How is your earnings trajectory impacted if you attend a top private versus a top public institution? How many students pay the full ticket price of tuition and what is the average tuition payment post-financial aid?  Should we be concerned about the levels of student loan debt in this country?

These questions and more were the topics of discussion at The Chicago Club where approximately 150 investment professionals gathered to hear Morton Schapiro, economist and the current president of Northwestern University, opine on the state of funding for higher education. For background, Morton Schapiro is currently the 16th president of Northwestern University for which his term began in September of 2009. He is a Professor of Economics at Northwestern and also holds appointments in the Kellogg School of Management and the School of Education and Social Policy. He previously served as the president of Williams College. Schapiro is among the nation’s leading experts on the economics of higher education, with particular expertise in the area of college financing and affordability and on trends in educational costs and student aid. He has written more than 100 articles, and he has written or edited nine books, his most recent Cents and Sensibility: What Economics Can Learn from the Humanities (Amazon). His most recent book challenges modern day economics and discusses how economics can be improved through reading great literature, and even taking a step further, how one can improve investment performance through being immersed in great literature.

The industry of higher education is a fascinating one in that it is unlike any other industry in the world. In fact, some economists do not even consider it as an industry at all, however Shapiro argues the industry can be viewed with many similarities to a traditional business sector. Dissecting the industry of higher education, nationwide there are 4,400 colleges and universities that can be bifurcated into public and private, and for-profit and non-for-profit. As for students, or “customers” of the industry, there are 17 million undergraduate students and 3 million graduate or professional students. If you were to combine all the operating budgets of these 4,400 institutions, you would reach $600 billion dollars, or roughly 3% of this country’s GDP. Now this figure may seem large to some, but what one must also take into consideration is the multiplier effect of this 3%—the present value of future cash flows from the individuals that are bestowed with a great education and their respective spending impacts on other sectors of the economy.

Let’s dig in to take a closer look at the composition of these 4,400 institutions. Of these higher level education institutions, only about 350 schools (or 8%) have any admission standards whatsoever. Said another way, 92% of these higher education institutions accept anyone who applies. On the other end of the spectrum, for every twelve students who apply at Northwestern, only one is accepted equating to a less than 8% acceptance rate. Stanford, Harvard and Yale have even lower acceptance rates closer to ~5%. The reality is, the vast majority of students at higher education institutions are enrolled at schools that take everyone who applies. Further, of the 350 schools that do have admission standards, only about the top 150 schools get much publicity with the overwhelming attention going to the top 60 accredited research universities comprised of 26 private institutions including Stanford and Northwestern, and 34 of the public institutions including University of Illinois at Urbana Champaign, Michigan and Wisconsin.

This begs the question, how important is it to go attend to one of the top 60 accredited research universities? As most financial minded people would conjure, it ultimately comes down to a simple rate of return equation. Shapiro points out that we are at record rates of return for higher level education. The New York Fed looked at the direct costs of room and board and tuition plus the opportunity costs of entering the labor force immediately after high school. It took 23 years to cover the direct and indirect costs of a college education 25 years ago. Today, it takes less than 10 years to cover the direct and indirect costs—despite the rising cost of tuition that we’ve seen over the last 10 years. The return on higher education has increased much more rapidly than the rising cost of tuition. Simply put, higher level education is more important today than ever to maximize a student’s future expected earnings potential.

Let’s bring demographics into the analysis. Statistics show if you grew up in a household in the bottom 20% income range and you earned a degree from a higher level education institution, you had a 21% chance of jumping to the top 20% of income earners in the United States. The national average of a child growing up in the bottom 20% income earning household jumping to the top quintile is ~8%, leaving the non-attending high level education student in the low-mid-single digit percent range. This means that a lower-income student has roughly a four-times better chance at making the transition to the top quintile of household earners if he/she attends a higher level education institution versus if he/she does not attend. Further, if you went to one of the accredited public universities, the chances of moving from the bottom bracket to the top actually increased to 42%, roughly eight-times a child who does not attend any college or university. Taking it one step further, if a student attends one of the top private institutions, their chances of success (measured financially) moves to over 50%. Higher education matters.

This then begs the question, “Do the benefits of this higher education outweigh the costs?” Currently there is ~$1.4 trillion dollars of student loan debt outstanding in the United States. However, less than 1% of students have loan balances over $100,000. In fact, only 60% of college graduates have student loan debt (40% graduate debt free) and the average student loan balance for those that have loans is only $30,000. If you look at the rate of return on higher level education, particularly if you are attending a top 60 school, you cover the costs of your education very quickly. One area of concern is attendance at a less accredited “for-profit” school where we find the vast majority of student loan defaults.

The event wrapped up with a Q&A session, where the focus was on top public schools vs. top private schools, financial aid, online education, and best advice for future students.