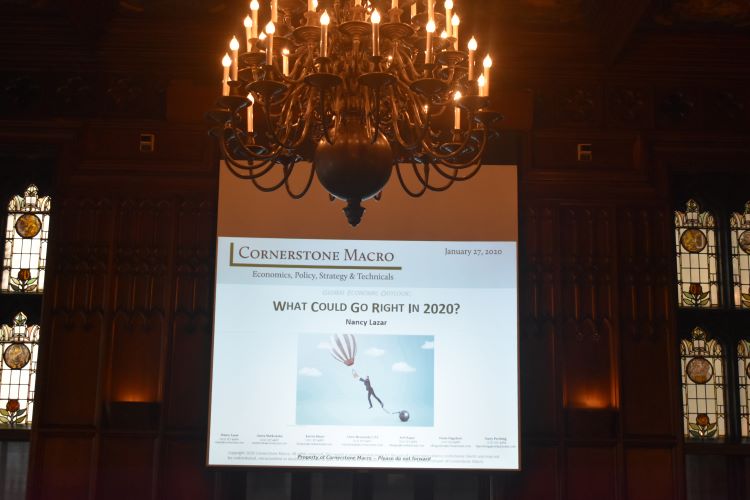 A full house was in attendance at the University Club on Tuesday, January 27, 2020, to hear Nancy Lazar, founder and CEO of Cornerstone Macro, share what could go right in 2020. Lazar started by stating that low global growth expectations, low inflation, and strong cyclical data could potentially prop up the US economy in 2020. She dove into global growth expectations first with an emphasis on monetary policy and secondly on how exogenous shocks could impact these expectations. This discussion was followed by information about what cyclicals may indicate strong growth within the US economy. She closed out the presentation with a discussion of Cornerstone’s research into inflation expectations and recession potential within the US economy.

Global Growth Expectations
Early in the presentation Lazar informed the audienc that “the economy is driven primarily by policy and exogenous shocks.” Monetary Policy has aided the recent bull market in 2019 through a global easing cycle where global short rates have been kept low. In Cornerstone’s research, they’ve found that these global short rates lead global growth activity by one to two years. Lazar also clarified for the audience that while many people may say that the economy is no longer sensitive to interest rate moves, research points to the contrary actually being true.

Regarding exogenous shocks, Lazar pointed out that there have been six exogenous shocks over the past 10 years, with the most recent being the Wuhan virus outbreak. This pandemic has resulted in a sharp drop in China commercial airline sales which has correlated to sharp drop in China’s domestic retail sales. Lazar even went so far as to suggest that the Wuhan virus could result in a 0.5% hit to China’s GDP growth. However, the impact of the Wuhan virus and other exogenous shocks have been muted by the positive effects of policy over the years. Lazar concluded her discussion about growth expectations by contending that the global growth slowdown is over.

Cyclicals
Lazar supported her contention that the global growth slowdown is over by pointing to cyclicals that support her position. The first cyclical that she pointed to was mortgage rates, which are relatively low.  Low mortgage rates, resulting from the easing cycle, tend to lead increased investment into housing.

Second—and most notably—she pointed to low corporate yields that she believes will yield strong CAPEX investment in 2020. Specifically, Lazar pointed the audience to BAA corporate yields, which are currently the lowest they’ve been since 1959. Her opinion is that low rates are sure to result in reinvestment in domestic business, which in turn will result in growth. Upon highlighting this indicator, Lazar acknowledged the opinion that share buybacks have been crowding out CAPEX investment. However, this perception has an underlying skew, according to Cornerstone’s research. Specifically, buyback volume in the markets has been skewed by the tech sector, which has led the market in the volume of buybacks.  Their research indicates that the effect of buybacks crowding out CAPEX seems to be isolated to the tech sector.

Third, Lazar pointed to the lower corporate taxes that have made the US a relatively attractive country to invest in. These lower taxes have attracted new foreign investment and increased domestic investment, resulting in a healthier job market. The healthier job market has been evidenced by low unemployment and increased labor force participation across demographics. This has, in turn, resulted in an increase in real consumer spending. After expressing such optimism with her discussion of cyclicals, Lazar went on to discuss Cornerstone’s research into inflation.

Inflation Expectations
Lazar provided a quick discussion of Cornerstone’s research on inflation after spending significant time discussing cyclicals. In this discussion she briefly explained Cornerstone’s process for forecasting inflation and highlighted some of the variables Cornerstone accounts for in their projections. The conclusion of their research is that they do not expect recession in 2020 and, more interestingly, do not expect a recession until 2022. Lazar concluded her presentation with time for questions.

Q & A
What element of your research has received the most pushback?
The research about CAPEX. It has begun to receive some acceptance on the west coast, but still is rarely accepted on the east coast.

Do you have any concern over the growing deficit?
The deficit is definitely having a negative impact because it lowers the multiplier of any stimulus to the economy. However, it doesn’t seem to be an issue yet but could come back to haunt us.

How likely is the FED to implement negative interest rates?
Very unlikely given the failure of that experiment across global economies.

How will global recession impact the US?
Global central banks are still easing to soften blows. Take China, for example, who has been in an aggressive easing cycle recently to soften the impact of the Trade War and the recent virus outbreak. The use of policy measures to soften domestic blows for these global economies will also soften any impact to the US economy.

What is Cornerstone’s estimation of China’s growth rate?
About 3%, which is backed out from monthly data.