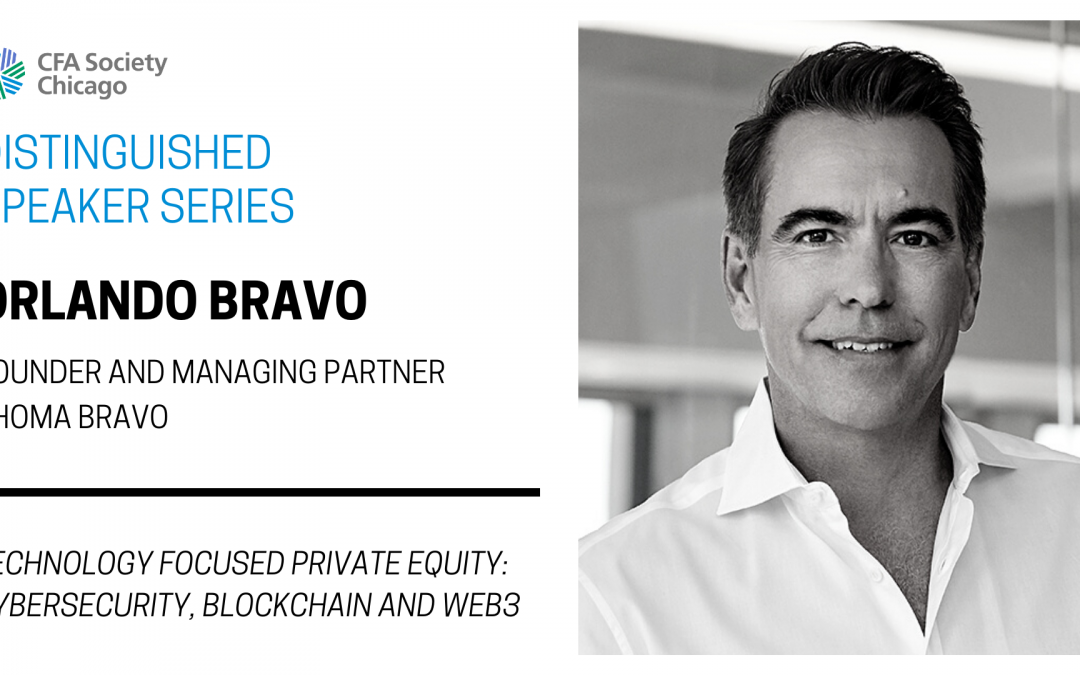 On March 10, 2022, CFA Society Chicago’s Distinguished Speaker Series Advisory Group welcomed Orlando Bravo at the University Club, and via livestream, for a discussion of the role of private equity in the software industry. Bravo is Founder and Managing Partner of Thoma Bravo, one of Wall Street’s largest private equity firms. In the early 1990’s, Bravo led Thoma Bravo’s entry into software buyouts.  Bravo has overseen 325 software acquisitions totaling over $100 billion in transaction value.

Thoma Bravo focuses on the application, infrastructure, cybersecurity and technology enabled service sector. The portfolio consists of over 50 companies generating around $21 billion of revenue. Thoma Bravo works collaboratively with existing management to drive operating results and innovation. This strategy has been described as “buy and build”.

The fireside chat was moderated by Arthur Olunwa, CFA, who is a co-chair of the Distinguished Speaker Series Advisory Group. Bravo is a native of a small town in Puerto Rico and spoke briefly about his journey from a small town in Puerto Rico to the founder of one of the world’s leading private equity firms. As a young man, Bravo played competitive tennis; this gave him the opportunity to travel to larger cities. In tennis exceptional play will earn you a point, but you must consistently repeat that play to win the match. The private equity world is similar in that you can win a deal with exceptional performance, but successful private equity firms are able to repeat that performance with every deal.

Olunwa began a question-and-answer session that started with his questions and ended with questions from the audience.

Recurring revenues are much cheaper. Gross margins average 90% and there is great cash flow.  Put simply it is the best place to be. You want to own the asset that takes “it” to the digital world.

In this competitive landscape, how do you not overpay?

The software industry has grown from around $60 billion in 2005 to $2.5 trillion dollars today. The dominant public companies under the current Web2 have grown dramatically. Software is no longer a back-end operation but the business of every industry. Software growth has shown an immunity to financial crises or other obstacles to growth that would affect other industries.

Bravo referenced his investment of Proofpoint for $12 billion. Typically, to exit at a profit, the buyers of the business must be much larger. The pool of potential buyers for this size of business is much larger than in other industries.

Bravo stated that he is not in the “momentum” business. It is important to know the philosophy and culture of the firm you will invest in. The need to grow rapidly does not mean that you have to lose money. The more profitable you are the higher margins you will have and the more you can grow. This philosophy serves shareholders and drives his business.

How important is scale?

Bravo stated that scale is very important, especially in cyber security. If you are the person at your company that is charged with protecting the data center, you don’t want to tell your boss that you are not using the “best industry standard” from a leading cyber security company. The leading cybersecurity companies are typically also the biggest.

How do you rate US Company’s ability to protect their data?

Bravo rated the ability of US institutions to protect their data as “average”.  There is a disconnect between the SaaS world (cloud) and the onsite world. There has been an increase in DOS (denial of service) caused by large attacks on one entity by different machines. In this environment, Bravo is expecting that some large banks will be compromised.

What was your Aha! Moment in crypto?

Bravo stated that seeing the excitement of younger venture capitalists anxious to finance crypto was eye-opening. He is known as one of Wall Street’s biggest bitcoin bulls. Crypto represents de-centralization, equality, peer-to-peer and less intervention. Most policymakers wish it didn’t exist.

Is there value in the intermediaries?

It has been a tough environment for firms such as Coinbase and Robinhood. Bravo stated that people want utility and fun when trading. These entities have not proven that they currently provide what investors want.

His view on the role of DeFi (Decentralized Finance) and how does it support Web3?

Bravo stated that DeFi is currently being built on blockchain, and this will enable us to do some things better. Bravo mentioned stock ledger, title insurance for residential homes and due diligence on companies as some activities that will benefit.

Olunwa then took questions from the audience for Bravo until the end of the program, when he finished with two final questions.

What is your experience with special purpose acquisition companies (SPACs)?

Bravo stated that SPACs are one form of how investors are figuring out to how to finance some of the world’s best firms. It is a way for retail investors to participate, however some of these firms may not belong as publicly traded entities. Bravo mentioned that at this point nobody likes them, and he won’t be doing one.

How would you structure a SPAC?

Bravo stated that to responsibly structure a SPAC, these three things are needed.

Your advice to students in Puerto Rico?

Bravo stated that they need to make a lot of calls and be risk takers. The hard part is taking risk with limited capital. He thought that the coming more open Web3 environment which stresses decentralization and user ownership would make things easier.

Does Healthcare have room in his portfolio?

Bravo has financed security software that is used in hospitals. Healthcare providers are slow adopters to software solutions, but software has the ability to make them more efficient. He mentioned that some software is made to allow employees to transact at work only what is authorized.

What will the next 5 years look like in software?

Bravo stated that he had never imagined the amount of growth in this industry.  In 5 years, he thinks they will be in a great position to do more since they have partnered with the best people. There will be opportunities in the private and public entities.

Olunwa then concluded the program by asking about Bravo’s philanthropy and the characteristics of his team at Thoma Bravo.

Bravo’s interest in Puerto Rico is personal; he is Puerto Rico’s first billionaire. There are many talented people in Puerto Rico and he is determined to give them a chance. The philanthropy must provide the capital to help level the playing field while risk takers must be provided with a safety net.

Bravo stated that culture is a critical component. He looks for good people with strong opinions and he strives for zero turnover. His team is decentralized which allows his people to be in positions of leadership relatively quickly. Bravo claims that compensation should not be a factor in turnover. The teams are independent but are supported when there is a need.