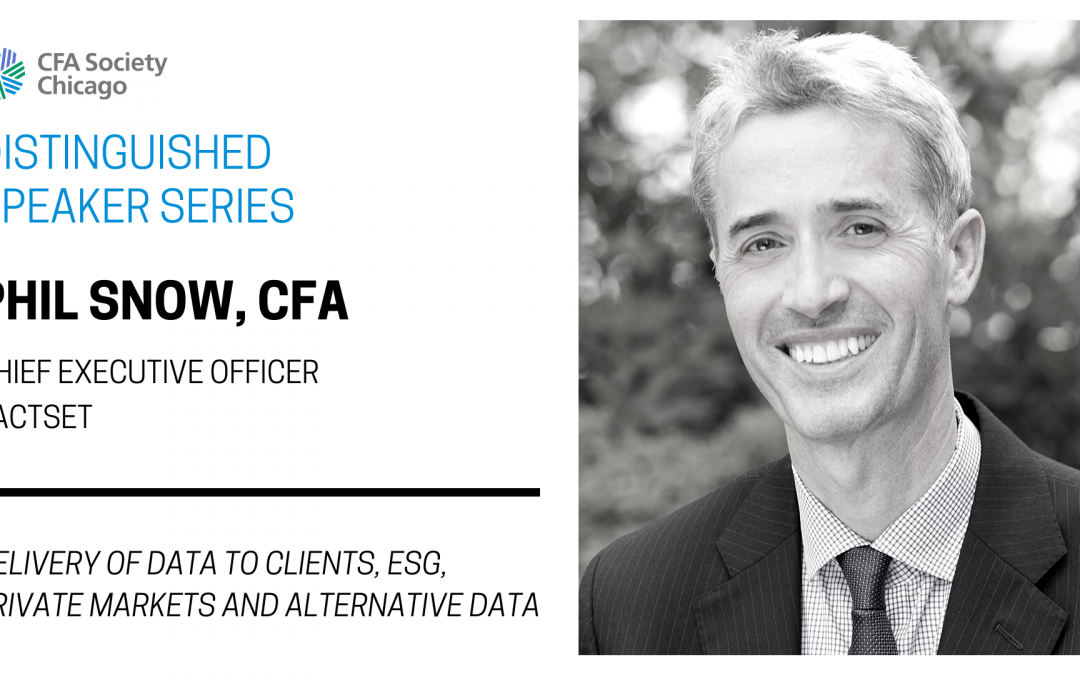 Vincent began by inviting Snow to recount his career journey. Having studied Chemistry as an undergraduate, Snow began his professional career in the biotech industry, before embarking to Korea for a few years to teach English.  Not knowing what he wanted to do at age 30, Snow went to business school, where one of his professors strongly encouraged him to pursue the CFA designation. Snow joined the local society (San Francisco) and began his CFA journey. Having used Bodie, Kane, and Marcus’s Investment textbook in one of his business school classes, he found the initial exams fairly easy.

Snow saw a recruiting advertisement from FactSet in the San Francisco Society’s newsletter. Snow did not know much about the company of which he would become CEO almost twenty years later. After a few years in California, Snow worked out of FactSet offices throughout Asia, including Sydney, Hong Kong, and Tokyo. He conducted the first FactSet demo in mainland China, in Beijing.

As a company with a learning culture, FactSet encourages its employees to pursue the CFA designation. There are between 150 – 200 CFA charterholders at FactSet currently, with around 300 candidates according to Vincent. Whether in sales or engineering, FactSet supports its employees who take the exams, allowing time off for exam preparation and giving bonuses for passing various levels in the series.

Vincent asked Snow to comment on his view of Chicago, from the perspective of the CEO of FactSet. Chicago offers a strong, diverse client base, with banks, private equity, hedge funds, asset managers, asset owners, and corporations. Chicago had traditionally been a hub-and-spoke to serve the Midwest. Going forward, with more virtual work arrangements, FactSet may increasingly serve Minneapolis or Wisconsin, for example, locally, rather than from Chicago. Snow is convinced that the days of commuting to a metropolis for four or five days a week are over.

“Is FactSet a data company, a research company, or a tech company?” inquired Vincent.  Snow defined FactSet as a platform company, with data the most important aspect of the platform. FactSet provides software and services on top of the data to serve its clients’ needs. Vincent steered the conversation to data costs for asset managers. Snow asserted that FactSet can gather and process data fast and efficiently so that asset managers can make faster, better decisions. Snow talks to chief technology officers frequently now, whereas he did not talk to them five years ago. Snow believes that winning firms will have info pushed to them from FactSet rather than having to pull it from FactSet or other systems. Asset managers whose data costs are too high are probably using too many data providers, offered Snow. Vincent asked if FactSet’s industry is an oligopoly with Snow responding that there are four firms of FactSet’s scale and a long tail of other firms. It is a fair playing field, according to Snow.

Snow explained FactSet’s commitment to Diversity, Equity and Inclusion (DEI), though he conceded that FactSet and the industries in which it competes (financial services and technology) have poor numbers currently. Evidence of FactSet’s DEI progress includes having a dedicated DEI Officer and that the company’s Board Chair is female. Snow explained that FactSet is one of 40-50 companies to make a particular commitment to Management Leadership of Tomorrow (MLT) and has created two fellowships in partnership with CEO Action for Racial Equity.

ESG entered the conversation a few times with Snow sharing that there are 20 different ESG providers on FactSet’s platform. FactSet acquired Truvalue Labs, which scrapes information about companies to build real time scores. Truvalue Labs is FactSet’s only proprietary original content in ESG information. ESG matters to FactSet’s employees, its investors, and its clients. Because of this, Snow pays attention to FactSet’s own ESG score and noted that the “S” is becoming more important. Snow said there is still an unsettled question of whether there is alpha in ESG investing, though their clients need ESG information regardless.

Snow cited four areas of content in which FactSet has been investing: Private Markets, the Wealth Space, ESG, and Deep Sector. Snow believes FactSet is particularly well positioned to combine private and public market data. This will allow the company to meet growing client demand, as Snow said that almost any institutional asset manager of “any scale” is considering how to build an Alternatives strategy. An interesting fact that he set out is that there is 100x more data about private markets compared to public market data.

The conversation drew to a close with a couple of recent developments, two of which are connected to Standard & Poor’s. FactSet (stock symbol FDS) was included in the S&P 500 late last year and is in the process of acquiring the business of licensing CUSIP codes from S&P Global, Inc., which was required by regulators to divest this business following its acquisition of IHS Markit.