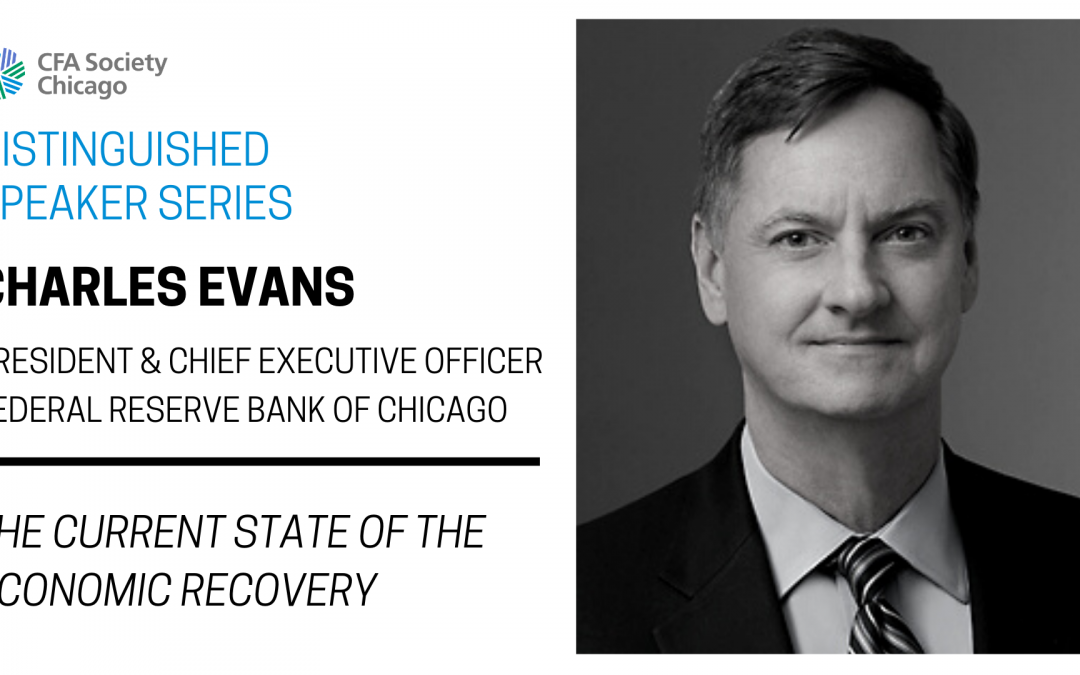 A sold-out crowd gathered on Zoom on March 3, 2021, to hear the President and CEO of the Federal Reserve Bank of Chicago, Charles Evans, speak about the state of, and outlook for, the U.S. economy. The event was moderated by CFA Society Chicago’s own Nick Vassilios, CFA, of Charles Schwab Asset Management Solutions, and started with a brief overview of economy’s current state.

Evans painted an optimistic picture for the US Economy. He started by pointing out that the economy began to rebound at the end of last year and went on to state that he expects the rebound to continue throughout 2021. The recent and continued stimulus from fiscal authorities has played a big role in the rebound to date, and according to his and his team’s analysis, US consumers are doing reasonably well on average; though, there is a wide variance of spending power among consumers. Evans continued to point out that the economy’s ability to adapt to the new working environment has also facilitated the strong recovery. However, despite these adaptations, the headline unemployment figure still hovers around 6.3%, but Evans and team expect this to fall closer to 5% by the end of the year. Finally, Evans pointed to the falling COVID cases as a sign for optimism. He opined that the rollout of vaccines has been positive to date but urged listeners to remain cautious as the economy begins to open up.

After covering the state of the economy, Vassilios pivoted the conversation to talk about the Fed. He explained for the audience that Evans, as chairman of the Chicago Federal Reserve, holds voting power on the FOMC every other year and pointed out that 2021 is a voting year for the Chicago Fed. So, Vassilios asked if Evans’ preparation for FOMC meetings changes between voting years and non-voting years. Evans responded by saying that his preparation is consistent no matter the year. Even if he is not voting, he still has a voice on the FOMC and can provide his own perspective to other voting members. So, he and his team always thoroughly prepare for FOMC meetings. Vassilios followed up by asking how the FOMC’s meetings have adapted to the pandemic. Evans shared that the transition was slow as they required secure meeting technology given the sensitivity of their conversations, but the technology has caught up and they have been hosting virtual meetings. The biggest detriment to this format is not being able to share thoughts with peers outside of the formal meeting forum. Circling back to Evans’ preparation, Vassilios asked which economic metrics are on his “watchlist.” Evans explained that his “watchlist” changes with current events. One consistently monitored metric is the 10-year treasury rate, which Evans views as a bellwether for where the broad markets are moving. For a European perspective, he tends to monitor the 10-year German bund rate. Some more timely metrics he has been monitoring are COVID caseloads and tariffs and trade data.

Maintaining focus on responses to the pandemic, Vassilios then asked Evans what he thought were the FED’s biggest successes through the pandemic. Evans started by pointing to the successful redeployment of several policy tools that were designed in response to the Great Financial Crisis (GFC). He explained for the audience that the FED spent a lot of effort ensuring the overnight repo markets had functioning liquidity by increasing reserves and ensuring that short-term money markets had access to sufficient liquidity. Vassilios built on these points by explaining that the usage of many of these funding facilities was quite rare before the pandemic, but the FED had done a great job of advertising their availability.

Next, Vassilios asked a couple of questions about inflation. First, he asked Evans if he believed there is a risk that inflation does not just creep above 2%, but drastically overshoots it. Evans said that while a drastic overshoot is not impossible, it is highly unlikely. Looking at the data, there have been few years in the past decade when inflation has even hit 2%–even during the pandemic, while there has been highly accommodative policy, inflation has persistently undershot the 2% target. Evans projects that the labor market growth from the rebound in 2021 will likely lead to higher inflation, but he doesn’t expect anything to be “out of control.” Following up on the view of expected inflation, Vassilios asked what needs to happen to trigger sustained wage inflation. Evans started by saying that wages respond to inflationary pressures, so broad inflation will likely precede wage inflation. He then posited that two things can likely lead to sustained wage inflation—accommodative monetary and fiscal policy and productivity improvement. Both forms of policy are required to have a real impact on inflation and Evans opined that laborers will have to acquire new skills to receive higher wages as technology continues to constitute a greater portion of labor’s share of wages.

Finally, Vassilios asked Evans about the FED’s purchasing program. First, he asked in recent economic numbers have led the FED to lead to more accommodative purchases. Evans provided a brief history lesson of the QE1 and QE2 programs that were initiated in response to the GFC. He pointed out that these programs were extraordinary and hotly contested at the time, that the purchasing program spread asset purchases across a range of maturities, and that the eventual stop to the programs was dependent on the health of the economy. Current purchasing programs are following a very similar playbook. Next Vassilios asked about the tapering of purchases and if there are any plans to do things differently than the 2013 “taper tantrum.” Evans explained that the catalyst for the panic in 2013 that was labelled the “taper tantrum” was an overreaction to an innocent comment from FED Chairman Ben Bernanke. So, Evans suspects that communications about tapering will be more measured. Finally, Vassilios asked if Evans believed that the liquidity the FED has injected into the market has created unnecessary risk in the markets and contributed to a bubble. Evans stated he doesn’t believe these programs are contributing to a bubble. While the injection of capital and lowering of rates is designed to encourage risk taking to jump start the economy, the markets have evolved significantly to find new ways to introduce and manage leverage in investment deals. The presentation closed with Q&A.

If the US was to fall into a deflationary environment, what tools does the FED have to combat it?

The accommodative monetary policy the FED has been ushering in is designed to prevent such an environment, but various tools are available from the QE3 playbook that was written during the GFC. While the FED has a plethora of tools to fight these risks, the tools’ efficacy is often dependent on fiscal authorities to provide the necessary complementary accommodation.

M2 money velocity peaked in 1977 and has dropped precipitously during the pandemic. What would happen if this figure began to rise?

These aggregates are no longer closely monitored because of their predictability and lack of explain-ability.

What are your views on the end of LIBOR?

Other benchmarks have been developed, such as SOFR, but the biggest challenge is adoption. The pace of adoption has been acceptable to date, but there is still a lot more work to be done.