Who better to teach management during a crisis than a former bank CEO who began his job in the midst of the 2008 recession? Rick Waddell has one of the most extensive resumes you’ll find in banking and dedicated his career to growing Northern Trust from a sleepy custody and wealth management firm into the technology-driven asset management and banking leader it is today. Waddell was CFA Society Chicago’s guest speaker on October 10th for its Distinguished Speaker Series luncheon.

He noted proudly that he saw many former and current Northern Trust employees in the audience. “The CFA Society is really important to us at Northern Trust,” he said. Waddell said that he was told not to make his speech a commercial for his bank, and joked that “this eliminates about 95% of my content” and made him ponder what would be a good topic for him to address, ultimately deciding on “5 Things I Learned From the Global Financial Crisis of 2008”.

In Waddell’s mind, the following five key features made the difference between success and failure during the financial crisis. 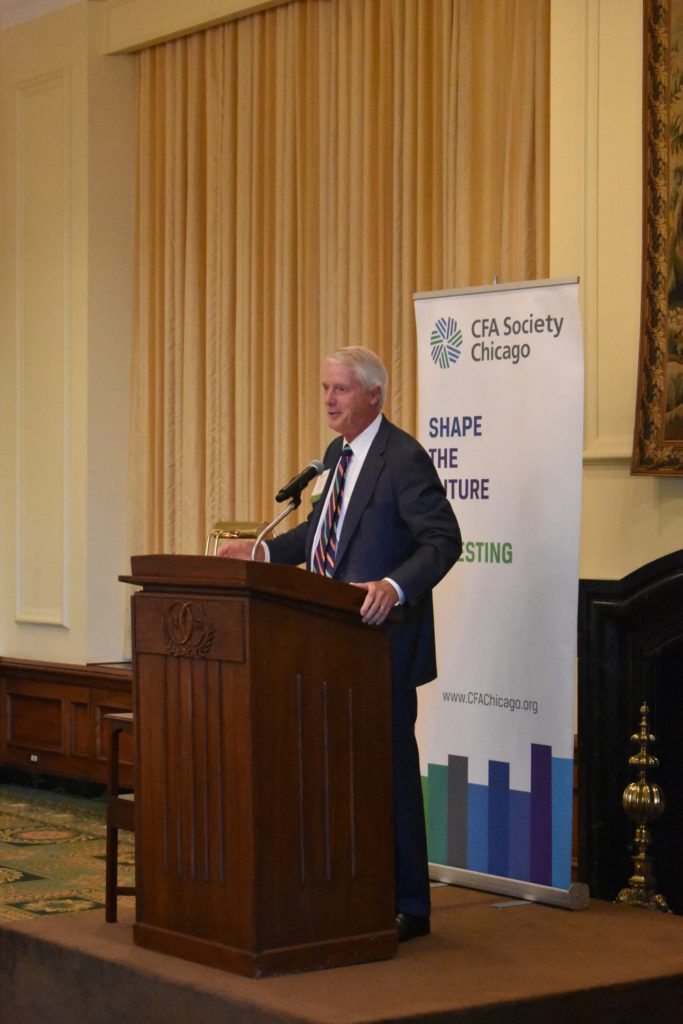 Capital matters. For any organization with a balance sheet, both the quantity and quality of its capital during ’08 were incredibly important. He noted that capital ratios had been too low in Europe, but generally were roughly OK in the US. He still sees problems with bank capital transparency in Europe today.

Liquidity matters. Again, both the quality and the amount of liquidity are important. Waddell said that he believed that the fall of Lehman Brothers was not due to lack of capital, but to lack of liquidity. The Fed was much more focused on capital during the global financial crisis than liquidity, but the latter was just as important. One of the earliest warning signs Waddell saw that all was not right in the financial world was when HSBC wrote down $11 billion worth of subprime mortgages in March of 2007. Waddell wanted to know if any part of Northern Trust had exposure to subprime lending and found that, while they didn’t make the loans themselves, they still had subprime-related instruments in some of their investment pools. Another warning sign came in August 2007 when Waddell learned that a securities lending collateral pool was facing losses when a number of banks withdrew from the niche Auction Rate Securities (ARS) market and banks holding the formerly liquid instruments suddenly faced losses.

Leadership and management during a crisis matter. Waddell said that during a tumultuous period, “the good and the not so good in all of us comes out.” With his background focused on commercial banking, he had to learn a lot of things quickly during the crisis as a new CEO leading a diversified financial firm. At the same time, Waddell had consultants and executives coming to him asking who he was going to fire in order to shed costs. Firing people immediately after the bank’s best year on record (2007) didn’t make sense to Waddell. He didn’t want to go down that route, and it turned out that staying the course and not making widespread headcount reductions was the right decision.

Culture matters. “At Northern Trust, our values are service, expertise and integrity,” said Waddell. Having that culture in place before a crisis hit was extraordinarily important. While Waddell admitted that Northern Trust has its share of problems like any firm, and its culture needs to evolve while holding employees more accountable, having a set of values that the team buys into was one of the main reasons the firm navigated the crisis so well. “Culture is more important than strategy,” Waddell said, echoing management consulting pioneer Peter Drucker. Despite the bank’s commitment to its partners and Waddell’s desire to avoid mass layoffs, its ROE fell to 8.2% in 2011, below its cost of capital, so the bank went on a mission to cut costs while still avoiding large layoffs that could have demoralized staff.

Strategy matters. Waddell said that having skin in the game was important during the recession. He found that the trend of banks securitizing assets and immediately getting them off their balance sheet led to a lack of skin in the game with financial institutions, and this made the crisis even worse.

Waddell continued on at length about his experience during the financial crisis. In 2009, large US banks were forced to accept a capital injection as part of TARP. Northern Trust was well-capitalized and didn’t need the money, but regulators hinted that they needed to comply or there could be consequences. Waddell said that the TARP program was in theory a good idea that could act as a stimulus, but the problem was that there weren’t enough borrowers demanding capital for it to have much of an impact. What was originally termed the “healthy bank program” soon became “the bailout” in the public’s eyes, which led to protest movements such as Occupy Wall Street, some of which were held immediately outside Northern Trust’s headquarters at LaSalle and Monroe. This populist take on the government bailing out fat cat bankers hurt the perception of Northern Trust, despite the firm’s insistence that it didn’t need capital and its desire to quickly repay the money. Waddell said that the terms of the loan Northern Trust was forced to take netted taxpayers a 15.5% return, and TARP overall was one of the most successful investments for taxpayers in recent history and very profitable for the government.

Blame for the crisis is difficult to assess, but Waddell said that the Fed was responsible for missing some of the warning signs, banks were also responsible to an extent for lax standards, and consumers were also responsible by borrowing far more money than they were able to repay. Waddell said that eventually there will be a recession in the US but the banking system will be in a much better position to not only withstand it, but even be a positive force for stability. One thing that remains unresolved is the issue of “too big to fail”, but bank capital and credit quality have greatly improved overall. While he noticed some clues that markets were starting to crack back in 2007, Waddell sees few red flags on the horizon today. He said that usually problems will manifest early on in the mortgage market, but that the industry appears to be functioning fairly normally now. There could be some issues with Brexit next year, and Northern Trust continues to monitor that situation closely, as well as the Chinese economy and issues around cybersecurity. In his Q&A, Waddell said that young professionals considering a career in banking will still find opportunities in the future, as the practice of safeguarding assets and allocating capital will be around for a long time. He was slightly less upbeat about the prospects for the asset management industry in light of the disruptions faced by robo advisers, low (and sometimes free, in the case of Fidelity) account fees, and the trend towards passive investing.

True to Northern Trust’s values, Waddell finished his speech by encouraging the audience to get involved in a philanthropic endeavor that aligns with their interest, saying “to much is given, much is expected”. Lastly, he noted the firm’s long history of collaborating with United Way and said that there’s still much work to be done.