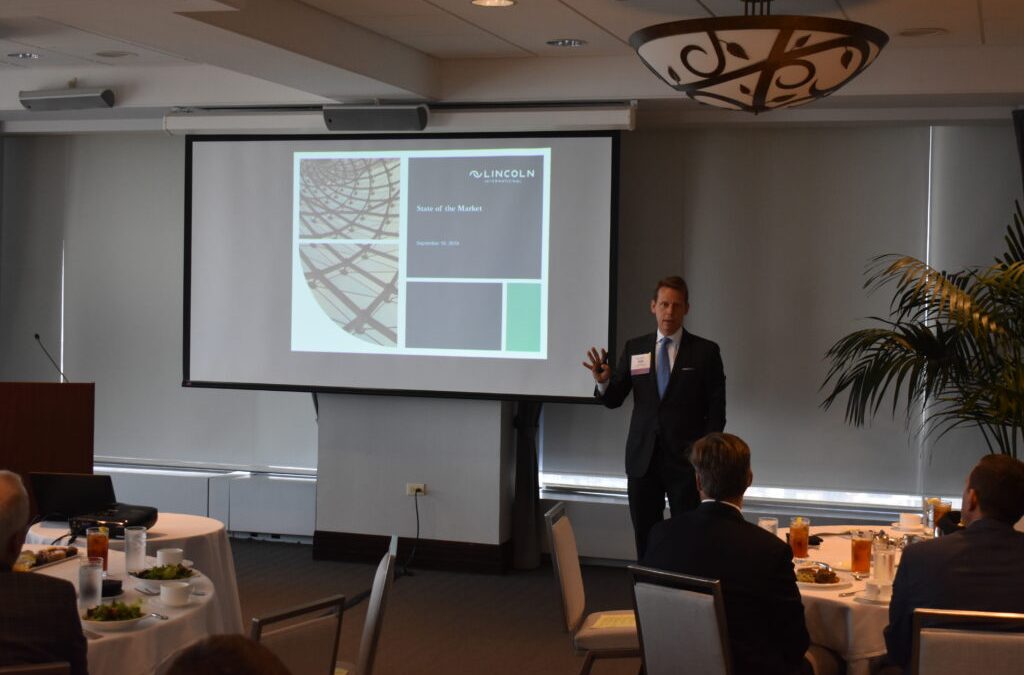 On September 10th the Distinguished Speaker Series Advisory Group hosted Rob Brown to provide his insight on the M&A market over lunch at the Metropolitan Club. Brown is the CEO of Lincoln International. His firm serves private equity firms, corporations and private businesses around the world, providing advice when selling or buying a business, securing financing solutions, valuing an organization or portfolio, or navigating special situations. Brown has nearly 30 years of experience advising leading private equity groups, privately owned businesses and large public companies on divestitures, acquisitions and other strategic initiatives.

Brown is a recognized advisor and thought leader in the investment banking industry. He is a frequent guest on WBBM’s Noon Business Hour in Chicago, and a speaker and author on mergers and acquisitions-related topics. Brown sits on the board of UNICEF USA and the Dean’s Business Council for the Gies School of Business at the University of Illinois. He is also President of the Board of Regents at Saint Ignatius College Prep in Chicago.

Brown started with an outlook on the M&A market. Global M&A activity has increased year to date in 2019 compared to the same period in 2018. There have been around 230 M&A deals this year verse 200 in 2018. The P/E market has been robust as well. Following several years of growth with an all-time high in 2018, inflows have returned to more moderate levels. Activity in 2019 could be characterized by established P/E platforms getting larger, with new funds facing a more challenging fundraising environment. Despite the fundraising slowdown, a thinner slate of opportunities for capital deployment has mitigated the impact to capital supply, leaving significant dry powder available in private debt funds.

On the lending front, bankers are still providing funds while defaults, the bellwether of a slowing economy, have not increased in a material way. Overall, the continued trade/tariff uncertainty, slowing global growth, Brexit concerns, and mixed signals from key economic indicators about the likelihood and timing of a recession have given lenders a pessimistic view of the market. They are lending but looking for a reason not to!

Brown advised that valuations of businesses have grown to historic highs. This is due to several factors, the most significant being the tax cuts passed in 2017 (reduction of the U.S. corporate tax rate has made the United States a more attractive jurisdiction for inbound M&A activity and has likely increased the value of U.S. domiciled businesses), and the large sums of P/E money raised over the past several years looking to be invested.

Additionally, there is nothing on the horizon which makes Brown think these valuations would change in the next 3-6 months. Overall deal activity is great with high valuations being the norm. Brown advised that now is an excellent time to consider selling a privately held business. The M/A market could be close to its top as the number of private sellers entering the market is high. These entities are usually late to the market.

Brown noted that although the market is richly priced, a recession would not necessarily bring down M&A prices. It is more likely that M&A activity would cease, but as soon as there is an upturn in the market deals would flow again.

Q: Should a recession occur would capital be available, or would the market dry up?

M&A firms have committed capital on their books. This capital would not be put into M&A deals, but left as idle, short term investments. The M&A firm will sit on these funds making a nominal rate and wait until the market breaks upward.

Q: How much of the high multiple business valuation is due to any cyclical effects?

Modeling of returns has dropped over the past several years. P/E should float based on a measure of public equity plus a spread. As the prices in the public equity market have risen, so to have the multiples for the M&A market.

In 2009 when the market was in disarray the outlook was for a 30% reduction in P/E firms. This outlook turned out to be completely wrong. The overall amount of P/E firms is now greater than in 2009, and with the constant search for returns that will beat the market, the current fee structure is unlikely to change.

Q: What effect will negative interest rates have on the M&A market?

Low or negative rates have not affected the cost of capital. Capital has been cheap for an extended period.  Any nominal change in interest rates will have little to no impact.  What is more important is the availability of capital. It is the extension of investors risk appetite that is the greater concern. Investors are stretching beyond their comfort zone, getting riskier with their investments.

Q: What is the state of European M&A?

The trade war with China has caused a number of unintended consequences, one of which is that China has refocused its M&A activity away from the U.S. to Europe and Germany in particular. Lincoln’s office in Germany will set an M&A record in deals for 2019.