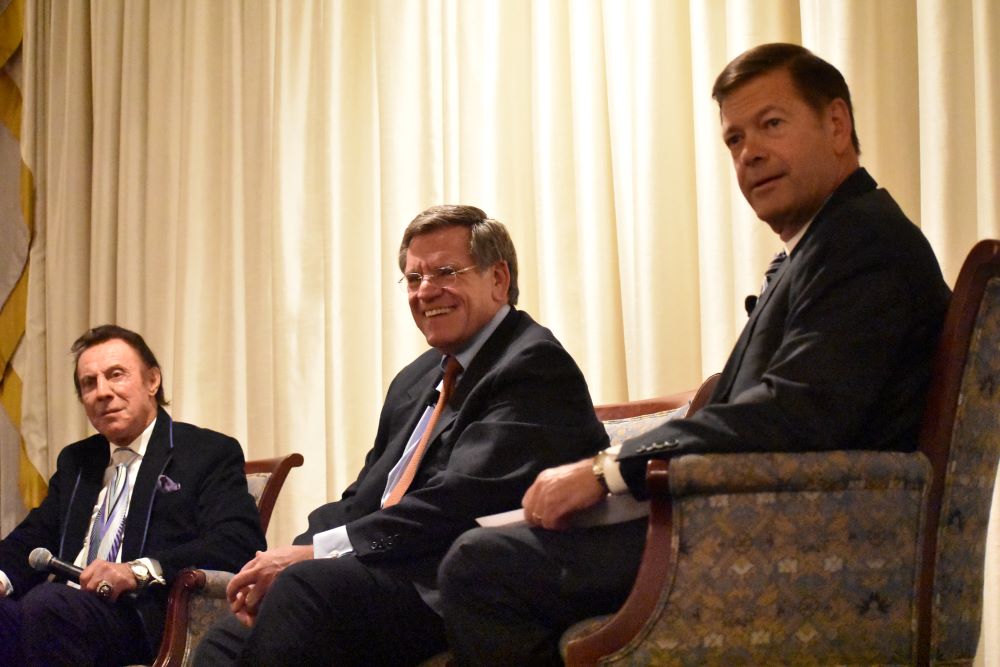 On March 11, 2020, a full house gathered at the Palmer House Hilton to hear a discussion between Rocky Wirtz, CEO of Wirtz Corporation—a holding company engaged in the real estate, beverage, banking, media and sports entertainment sectors—and CFA Society Chicago’s Daniel Kastholm, CFA, of Fitch Ratings. The two began by running through a brief history of Wirtz Corp, from its founding under Rocky’s grandfather, Arthur, to Wirtz’s current tenure, followed by a discussion of Bryan Smith’s book, The Breakaway, which Wirtz collaborated on. The event concluded with some Q & A for Wirtz and another special guest, NHL Hall of Famer and Blackhawks Veteran, Tony Esposito.

Wirtz shared with the crowd that Wirtz Corporation, now under its third generation of family ownership and getting ready to pass off to fourth generation, was started by his family of farmers in Mundelein. He recounted fond experiences of growing up on the hog farm and getting his hands dirty at a young age. His grandfather, Arthur, gave the company a kick start with some savvy real estate investments he made during the Great Depression. Just a handful of years later the company had expanded into beverage distribution, banking, and sports entertainment.

Wirtz started his career with a different beverage distributor before joining Wirtz Corporation under his grandfather. This previous experience led him to gravitate to the beverage side of business within Wirtz Corporation. Today, Wirtz Corporation’s beverage subsidiary, Breakthru Beverage Group, is responsible for a staggering 40% of Jack Daniel’s distribution across the US and about 20% of its distribution worldwide. It also has a considerable share of the spirits and wine distribution market within Illinois. After sharing this brief history, Wirtz went on to share about the book he collaborated with Bryan Smith on, The Breakaway.

When Bryan Smith reached out to Wirtz about writing his book, The Breakaway, Wirtz made it clear that he didn’t want the book to be a “puff piece.” He wanted the book to focus on the business, the value of family, and the success he and his team found in the face of adversity. According to Wirtz, the book does just that. It opens up by talking about some of the hallmark properties that were a part of the Wirtz Real Estate Portfolio such as Chicago Stadium, MSG, and the United Center and how these properties were purchased for “nickels on the dollar” by Arthur during the Great Depression. Wirtz said his grandfather always took “measured risks” and that showed in his business decision making.

One of those measured risks that Wirtz and Kastholm discussed was Wirtz Corporation’s foray into sports entertainment. Wirtz recounted to Kastholm and the audience how his grandfather focused on boxing and ice skating in these big properties because they had the most frequent events and filled the most seats at the time. It was at this point in the story that Kastholm pivoted the discussion to the Wirtz Corporation antitrust case that concluded in 1959. Wirtz commented on the case saying he is now surprised by the outcome given the way some modern companies have grown and not been challenged for antitrust.

After recounting the rise of Wirtz Corporation and the challenges faced by Wirtz’s grandfather and father, Kastholm steered the conversation towards Wirtz’s integration as the head of Wirtz Corporation and his turnaround of the Chicago Blackhawks franchise. Wirtz started from the beginning and shared with the audience that months after he took his place at the helm, he got a call saying that the Blackhawks weren’t able to make payroll. Taken aback by the news, Wirtz made the quick decision to take a loss himself so he could pay his people, and then took it upon himself to understand what was wrong in the Blackhawks organization. After running into a few roadblocks he decided to call a friend of his that he thought might know a thing or two about owning a sports team, Jerry Reinsdorf. Reinsdorf advised Wirtz to hire a new team president for the Blackhawks. Wirtz quickly identified his top prospect as then president of the Chicago Cubs, John McDonough.

Convincing McDonough to leave his position as president of the Cubs, an already successful franchise, and join the Hawks was Wirtz’s first of many challenges with turning the Blackhawks around. Wirtz shared with the crowd the unique interview process he had with McDonough and how he finally convinced him to join the Blackhawks. Next, Wirtz and Kastholm discussed the next big hurdle, getting the Blackhawks on television. This endeavor came with a whole new set of challenges—one of which was raising the money for on air slots. Wirtz explained that this was particularly difficult because most franchises will pay for their time on air by selling advertising slots, but no businesses wanted to buy an advertising slot around the Blackhawks because they didn’t believe anyone would tune in. To overcome this hurdle, Wirtz took a tip out of his grandfather’s playbook he turned to his Rolodex.

After talking about the hurdles the Blackhawks organization overcame and the eventual success it realized with Wirtz at its head, Kastholm and Wirtz took a moment to talk about the purpose of the book. Wirtz shared with the crowd that the book, The Breakaway, has all proceeds benefitting the Blackhawks Foundation. After the discussion the crowd was offered some time for Q&A with Rocky Wirtz and Tony Esposito.

How do you balance business value with business ethics?

You have to put the company first and try your best to operate without emotion. Objective decision making is difficult when you get emotional.

Can you make money in professional sports?

It’s possible, but it’s not easy! The key is making the playoffs. Without the playoffs, the season is cut short and popularity drops, decreasing both ticket and merchandise sales.

Will the Blackhawks be doing anything in response to the Cub’s Marquee Sports Network?

Nothing is in the pipeline at this time. But it is something the organization will certainly research and monitor how it works out for the Cubs organization.

How will newly legalized sports gambling affect the fan experience?

How are trade deadline decisions made?

It’s based on the market landscape, so every decision is unique. There are myriad variables that go into each decision, so it is difficult to come up with a uniform formula for the decision process.

How can the Blackhawks break barriers for female coaches in professional sports?

The current coach just started in 2018 and our last coach was with the organization for 10 years, so hopefully we won’t be starting a new search too soon. But there are already many women in management roles within the organization and the share of women in management roles has grown every year for several years. It is only a matter of time before coaching positions throughout the league are taken up by women.

It was terrible because he was a great scorer! In Esposito’s first game with the Blackhawks, he played against his brother who had just been traded away from the Blackhawks and his brother scored two goals on him.

It’s been incredible. Esposito has worked with each of the three generations of Wirtz Corp. First with Arthur and William as a player for the Blackhawks, and now with Rocky as spokesperson for the Blackhawks Organization.