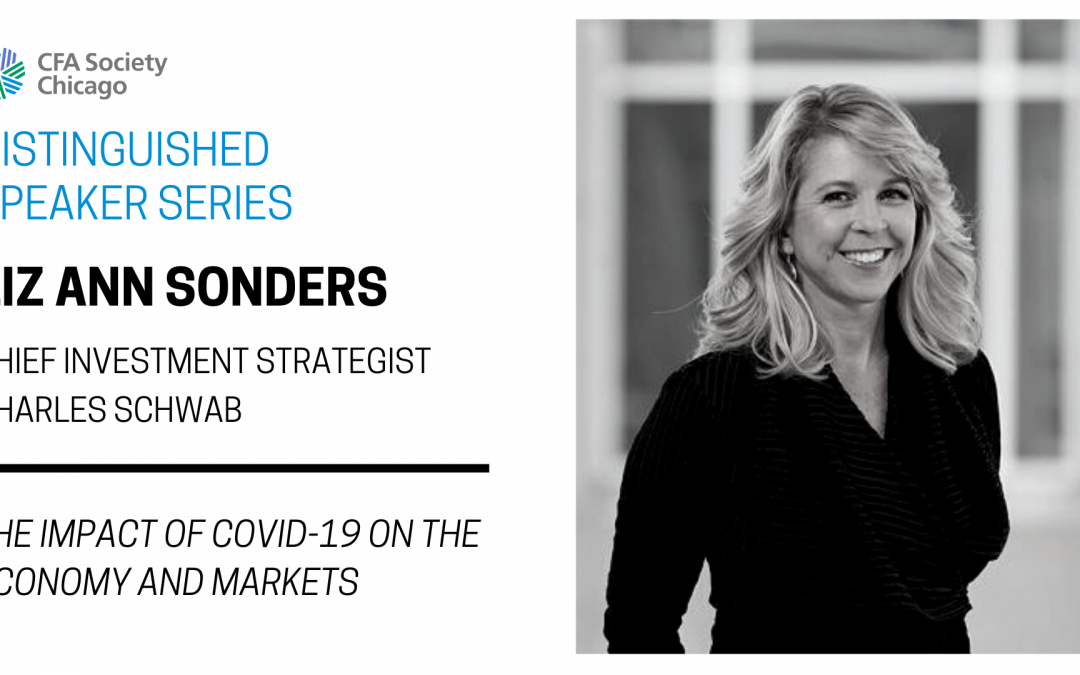 A crowd of over 200 signed in for a “virtual fireside conversation” with Liz Ann Sonders on September 22, 2020. Sonders, chief investment strategist at Charles Schwab, covered a range of topics within the context of the environment caused by the COVID-19 pandemic including: the unprecedented amounts of monetary liquidity and fiscal stimulus supporting markets, the expected shape of the economic recovery, market leadership, and investor sentiment. Sonders is a regular speaker at industry gatherings (including past Distinguished Speaker Series events for the CFA Society Chicago) and appears frequently in the financial media (both print and electronic). For this event, she was interviewed by Nick Vassilos CFA, vice president and head of risk and performance analytics for Charles Schwab Asset Management Solutions.

The Economy and Market Valuations

Over the course of an hour, Vassilos questioned Sonders on a variety of economic and markets-related topics. Since her focus is primarily on serving Schwab’s key market of individual investors, Vassilos began by asking her how she talks with them about risk, given the elevated levels of both market indices and economic uncertainty deriving from the pandemic. Sonders acknowledged that the current situation is unique and therefore poses a challenge for assessing risk. She described the “froth” in the equity market as driven by a new cohort of investors—day traders with little experience in trading stocks, let alone long-term investing.  She speculated that many came from the world of sports betting, or simply people with more time on their hands because they’re working from home.  In any case, it’s difficult to judge how long they might stick with the market should it enter a down turn.

Vassilos then moved on to an assessment of the economy and markets generally. Sonders expects the economy to recover in a pattern she described as “rolling W’s”, meaning in a zigzag pattern, although she also acknowledged the trend line of the letter K whereby some parts of the economy do well while others struggle. Which category a person, company, or industry falls into depends on how well each deals with the impact from the pandemic. As an example, she contrasted the prospects for health clubs that require people to gather in groups, versus the companies that make exercise equipment for home use.

On market valuations, Sonders noted that before the pandemic, valuations conveyed more information about market sentiment than real value. They had very low correlations to future twelve month returns. Now however, they have more relevance because interest rates and inflation are so unusually low and are expected to remain so for a long time.

On corporate earnings, Sonders sees elevated risk for a disappointment in the third quarter reports. This contrasts to the second quarter when the bar for expectations was set so low, upside surprises were almost inevitable. Noting that 32 companies had provided earnings guidance in just the previous week, she thought that analysts will be better informed for this quarter making for fewer, and smaller, “beats”.

On Federal Reserve monetary policy, Sonders said that as much as the “Fed” would like Congress to take over with additional fiscal stimulus, it wasn’t likely to happen given the lack of cooperation between the political parties. A further sell-off in equity markets could spur some action from Congress, but absent that, she didn’t expect this to change before the election in November. While rising inflation isn’t a concern for the near, or even the intermediate term, she does see risk farther into the future from two factors:

Typical for a weak economy, we’ve seen slow money velocity and that has saved us from rising inflation for now, but it bears watching.

Sonders views the Fed’s actions to provide direct support to certain markets, e.g., buying ETFs, as distorting markets. It contributes to asset inflation, and when it comes without goods inflation, it has been a harbinger of a weak economy. She doesn’t see as much of a disconnect between the economy and financial markets as many others do, and to support this she provided a few statistics on the S&P 500 Index.  As of recent values, the index was up about 2.5% for the year. However, that was driven by an increase of 29% for the five largest index components.  The other 495 companies show a combined negative 3.5% return for the year which is much more consistent with the health of the economy.

Vassilos next moved to the prospects for new anti-trust regulations. Sonders sees risk here as it is a rare area showing bipartisan support from both political parties. This is a big part of the reason that Schwab is currently neutral on the Tech sector. She tempered her opinion though by noting neither Joe Biden nor Donald Trump seems to rank this high in importance.

On deglobalization, or more generally, the process of diversifying sources of supply to increase reliability, Sonders sees movement in this direction that will give a boost to inflation, depending on how extensive the trend becomes. She expects U.S. firms to do much less “on-shoring” and instead more diversifying away from China in favor of multiple alternative low-cost producers (e.g., Vietnam, India, Mexico, etc.)

On the labor market and unemployment, Sonders pointed out that the final year of the last economic expansion saw significant benefits flow to low wage, low skill workers. Their rates of employment rose faster and the wage gap with higher earners narrowed.  However, their jobs were concentrated in service industries hit hard by the pandemic (hospitality, travel). So that group has suffered disproportionately. The recent rebound in construction has offered some offset to this. Ultimately, knowledge-based industries with higher growth rates will offer more, and better quality jobs, than service industries are losing, but that transition will take time. In the meantime, we need programs to educate people for these new economy jobs.

For the final topic, Vassilos asked Sonders for a comment on private markets. She expressed surprise that PE managers were having an easy time raising huge sums to invest. Given the heightened uncertainty, she didn’t understand why investors would want to commit to such an illiquid market characterized by very long payoffs.

Q: What is your assessment of demographics in the U.S.?

Noting that the “echo boom” (i.e., Millennials) is larger than the original baby boom generation, Sonders considers demographics to be a positive for the U. S. That group is of the age (25-40) for forming families and shifting consumption toward the areas that implies (child care, housing, cars, etc.) and she expects them to follow in their parents’ footsteps in that regard, boosting consumption. She also expects them to become long-term investors.

Q: What changes caused by the pandemic do you expect to last?

Remote working is an obvious one which Sonders described as a “genie out of the bottle”. This doesn’t mean that armies of workers will work from home full time. Rather she expects a hybrid form to predominate by which she meant workers splitting time between the convenience of home and the need for in-office time to allow for collaboration with co-workers.  Our experience during the pandemic has shown that workers at home are not slackers. In many cases, productivity has improved because people have more flexibility to spread their personal and professional responsibilities across the full 24 hours of a day.

Education is also in the midst of a permanent change. Now that online classes have been tried out extensively and shown to work, they will never go away. They offer too much of a cost saving to ignore. Again, a hybrid model may result, such as lectures being held online (or by recording) and classes requiring collaboration (discussions) or special facilities (science labs) held in-person.

Q: What are the biggest risks to the market?

Q: Does the federal deficit matter?

With the federal budget deficit nearing 100% of GDP, Sonders admitted this was a concern to her, but unfortunately it wasn’t important to anyone in Washington. In fact, ignoring the deficit is a rare point of bipartisan agreement. The position of the dollar as the only global reserve currency only served to heighten the risk of the adoption of MMT (at least partially). Despite the low interest rates, the cost of servicing the federal debt is rising because the debt is growing faster than the economy. That’s a primary reason the last expansion was so weak, and the growth rate of debt has only increased recently. Unfortunately, no one considers this to be a “moment in time crisis”, but it is a creeping crisis that will only get worse.

Q: Is the dominance of the largest stocks a risk to passive investing?

Sonders thought the dominance of the group commonly called the FAANG stocks did present a risk to passive management, but she sees the transition developing slowly. It could present an opportunity for active managers but would be enhanced if performance widened out.