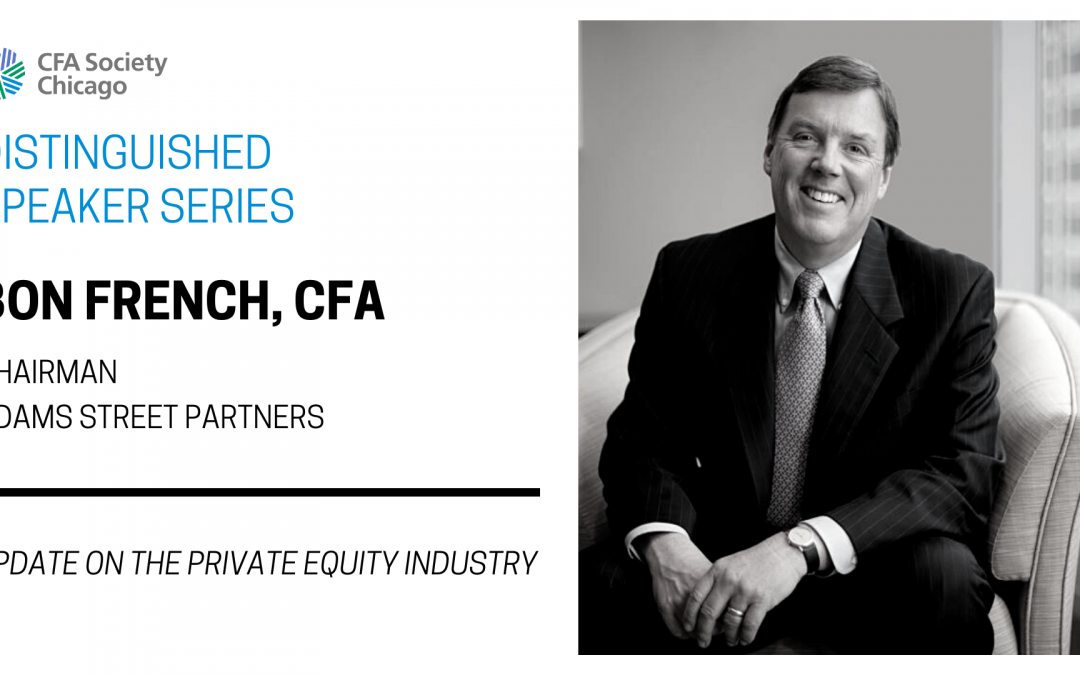 Adams Street Partners is primarily a Limited Partner that invests in Fund of Funds, but began life as a General Partner and Direct Investor in Venture-backed enterprises within the First National Bank of Chicago (First Chicago), which today is a legacy bank within J.P. Morgan Chase.  In 1989, Adams Street’s antecedent was spun out of First Chicago as Brinson Partners, which combined in 1995 with Swiss Bank Corp, which subsequently merged with Union Bank of Switzerland, to form UBS in 1998.  Adams Street Partners was born in the Fall of 2000, when it was spun out from UBS.

Adams Street Partners was inducted in the Private Equity Hall of Fame, as the first Limited Partner / Funds of Funds to receive the honor.  French cited a few reasons why his company is recognized as an industry leader.  Adams Street created a co-mingled vehicle in 1979, which was later considered the first Private Equity fund-of-funds.  French explained that the company did important work to allow Private Equity to be considered a distinct asset class.  For instance, in 1985, Adams Street developed, with Venture Economics, the first private equity performance benchmarks.  Three years later, the company worked with the National Venture Capital Association to establish written valuation guidelines for Private Equity.  In 1992, French represented Adams Street in a collaboration with CFA Institute predecessor, AIMR, to establish performance reporting guidelines for the industry.

French spent time describing the pros and cons of Private Equity as an asset class.  On the pro side of the ledger he cited: attractive risk-adjusted returns, imperfect correlations with other asset classes and, relative to public markets, greater market inefficiencies to potentially exploit.  On the negative side were five factors, one of which described Private Equity as “Relatively Illiquid.”  French strove to dispel illiquidity as a con, going so far as to say there is a “Myth of Illiquidity” associated with Private Equity.  French presented an exhibit that showed, from 2010 to 2020, at least 20% of Adams Street Primary US Buyout Portfolios’ beginning NAV was distributed, providing ample cash flow for Adams Street’s investors.

French summarized the current state of the Private Equity market.  First, deal volume (number of deals and value of deals) is expected to reach a record in 2021.  Buyout deals are particularly buoyant.  Second, valuations are near historical highs, driven by plentiful equity capital and leverage availability.  Buyout EV / EBITDA multiples are over 11.0x, just short of the all-time high of 11.5x reached in 2019.  Third, French pointed to significant dry powder waiting to be deployed, particularly at the larger end of the buyout market.  Next, he explained that fundraising has been robust, driven partly by increased institutional investor interest in the private markets.  Adams Street believes that lower public market return expectations explain some part of higher (or even initial) allocations to Private Equity on the part of institutional investors.

French offered his company’s view of the Investment opportunities within Private Equity.  In Venture Capital, Adams Street is Overweight, with a focus on early and mid-stage Technology and Healthcare companies.  In their Growth segment, they are also Overweight, seeking companies that can both tap into huge markets and have the potential to be industry leaders.  In the Buyout space, French’s firm is Overweight Small and Medium Sized businesses which are modestly leveraged.  The company is Underweight large and mega cap deals.  In Credit, Adams Street is Overweight small and medium sized companies which have “real cash flow,” and modest leverage, while focusing on owning senior secured debt of those companies.

French concluded his prepared remarks by addressing Diversity, Equity & Inclusion (DEI).  Adams Street has been a UN PRI signatory since 2010.  The company employees a dedicated director of ESG and climate change.  All potential investments, and all General Partners, are scored on standardized ESG metrics.  French asserted that Adams Street’s portfolios have a 40% lower carbon intensity than a relevant S&P benchmark.  The company seeks to improve its own climate friendliness.  Travel has been reduced, replaced by video communications.  Water efficient taps have been installed.  The UBS building in Chicago received a Silver certification in 2010.

Charitable giving from Adams Street has been focused on inner-city education initiatives for over 25 years.  Sixty percent of Adams Street employees globally are women or people of color.  Forty-five percent of the firm’s senior employee are women or people of color.  French said that some teams are so represented by women, that Diversity initiatives means hiring men.

Identifying the most interesting take-aways from such a richly informative presentation is difficult, but here is an attempt to do so: