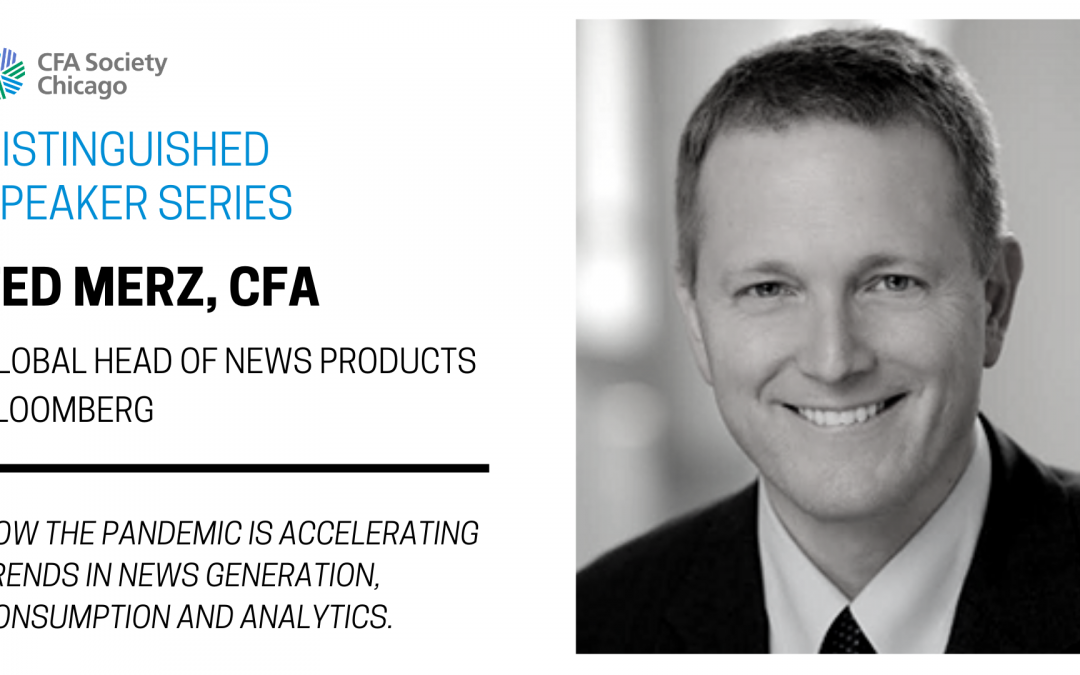 On December 1, 2020, CFA Society Chicago hosted another virtual meeting of its Distinguished Speaker Series featuring Ted Merz, CFA, Bloomberg’s Global Head of News Products. Merz oversees search and display for news and social media content on the Bloomberg Professional Terminal. He has spent the last 30 years at Bloomberg, the first 17 years as a journalist in the editorial group.

Those of us who are fortunate enough to have a Bloomberg Terminal at our fingertips during the workday are well aware of the power of Bloomberg. It facilitates the process of financial calculations as well as being an invaluable aid in portfolio management. The amount of journalistic reporting of news from Bloomberg is also an area in which Bloomberg is well known. Bloomberg currently uses 175,000 sources encompassing 40 different languages for its news reporting. It is this journalistic reporting aspect of Bloomberg that Merz oversees.

Merz labeled his presentation as “How the Pandemic is Accelerating Trends in Financial Media”. On December 20, 2019, China’s business news reported on an unexplained pneumonia that had become prevalent in Wuhan but had been isolated. In the next six days, Bloomberg posted 12 articles on this illness which was to be called Covid-19. The New York Times reported on this mystery pneumonia on January 6, with the Washington Post reporting on the same topic on January 8.

Merz compared the daily news volume of coverage on three major events during 2020; Coronavirus, Politics and Protests/Riots. The typical volume of reporting for any major story is a spike (rapid increase) upon occurrence followed by a drastically lower and steadier volume of stories. In a graph that compared the volume of news reports for these three major events, Politics and Protests/Riots displayed the usual spike, but the Coronavirus was the exception to the rule. The Covid-19 story broke slowly in January, however even past the March peak; there was no going back to normal in the volume of stories. This departure from the usual behavior led Merz to conclude that the Covid-19 story broke not with a bang with a whimper. Subsequent coverage through the mainstream media was fast and thorough, the news spread rapidly and its immediate significance not really known.

Merz stated the following trends have been accelerated by Covid-19:

Availability of Content – What is the best way to access content from these 175,000 sources?
Machine Translation – Foreign language content unlocked by machine translation
News Analytics – What insight do you take away from the story?
Summarization – Need for tools to distill a story into accurate quick takes
News Automation – Data sets or information that is relevant to a specific time

For the remainder of his presentation, Merz gave examples of what each trend meant. With respect to Availability of Content, Merz used Twitter as an example. Of the 500 million tweets per day on Twitter about 1% has some kind of financial relevance and maybe 50 have actual usable information. Information has become easier to obtain, however finding relevant information is getting more difficult.

Machine Translation refers to Bloomberg’s capability to translate foreign language news on demand. Merz gave examples of content providers such as Le Monde (French) and Interfax (Russian) as credible sources of news not immediately available to English-only speakers. Bloomberg can also translate foreign language articles in real time for a small selection of news sources. Merz pointed out that this can be a game changer given that 40% of all news on Bloomberg is not in English.

Merz refers to News Analytics as ways to leverage content sets and discover insights. The two components of News Analytics are the number of stories and assessing if the story is favorable or unfavorable. Merz used Boeing and the 737 Max plane crashes as an example. The number of stories about Boeing spiked at the time of the crashes and remained elevated for another year. A proprietary Bloomberg algorithm based on linguistics assessed whether the stories were positive or negative. Merz showed that as expected, negative stories dominated immediately after the crashes.

Summarization becomes more important as the volume of coverage increases. Bloomberg has a proprietary summarization engine which searches news for similar stories and then uses AI to write a label for this group. Merz used the example of 248 articles concerning Pfizer coming in chronological order as is typical for the news feed. Bloomberg’s proprietary algorithms will group similar stories about Pfizer and attach a label. In his example, there were 48 stories concerning approval by the UK of the Pfizer vaccine. The label written by the algorithm was “UK to approve Pfizer vaccine”.

News Automation has been around for quite some time, it’s simply the use of data to automate a story. Typically in finance the data has been quarterly earnings figures which populate earning releases. When Covid-19 appeared this type of fundamental data was not relevant. New data sets needed to be on-boarded that spoke more to the resulting health crisis. Examples of new data sets included: office occupancy in the UK, the number of people still using the metro in the New York City region, and hospitalization rates. This data was made available and automated, making it easier for users to find. This type of data can then appear directly on the users news feed.

Merz concluded his presentation with his thoughts on where the financial news industry is going in the future. He sees a continuation of the five (5) trends with more algorithms to make sense of an increasing amount of data. How to determine breaking news and how to rank its importance will be the focus of these new algorithms. Real time translation of foreign language news stories will become more common and alternative data sets will be created and be more accessible via news automation.

Following his presentation, Merz took a number of questions from the viewers via the “chat” function on Zoom.

How do you find Summarization on a topic via the Bloomberg Terminal?
Using the mnemonic NSTM launches a function where you can initiate a search and generate a summarization.

How do you approach bias in new reporting and how do you work around the news partnerships that you have?
Part of this question is better answered by Bloomberg’s editorial people. Merz oversees non-Bloomberg sources which are vetted manually. Bloomberg errs on the side of running factual new reports and information important to financial professionals. Partnerships do not restrict Bloomberg reporting. Bloomberg currently has over 100 partner deals in different countries.

What do you see with respect to the risks to our democracy given social media disinformation?
The amount of “fake news” in the financial arena is much less than what is found in the political arena. Disinformation about companies and financial transactions can be a crime when the SEC becomes involved. When people have money on the line, they do much more research.

What would you recommend to most efficiently manage news flow for an equity portfolio on Bloomberg?
Merz recommended contacting your Bloomberg sales representative to walk you through the many ways Bloomberg can do this. They have had a tool for a number of years that takes the news flow and tags the equities you specify in that news flow. Due to increasing news flow Bloomberg has developed an AI tool called “Importance”. This tool ranks the importance of the news article with respect to that equity or industry. Many users want not only to see news on certain equities or industries, but also major news articles that are breaking or extremely important but may not contain that equity name.

How can Bloomberg differentiate itself on news going forward given the wide availability of news generally?
Merz stressed that Bloomberg is very fast and extremely global. Bloomberg has reporters in over 100 different countries. It is focused on finance and the effect of stories on global financial markets.

As you expand content with different providers can you speak to Bloomberg’s vetting process in order to confirm that stories are real and accurate?
Merz stated that every source is vetted and algorithms are utilized to flag stories for objectionable content. This can also be a very manual process and customer feedback is taken into account.

Do you think that there is an issue of way too much information on too many websites? Does this create more confusion than clarity?
People in the financial industry are very good at discovering what is important and what is not important. Merz went back to the argument that when money is on the line, the level of scrutiny is more intense. Merz only sees that there will be more websites and more information to contend with. Its Bloomberg’s intention to give access to appropriate information and give users the tools to sort through it all.

For product development, what is your process in deciding what new tools and features to prioritize?
The sales force at Bloomberg is highly engaged with the customer and they use customer feedback to develop new tools. Bloomberg is an expensive and crucial tool for clients and when requests/problems arise they hear about it quickly. Merz used the example of a hedge fund traders using Twitter to trade, Bloomberg eventually reached a deal with Twitter.

Are you looking to utilize different modalities such as audio to alert to certain fast and hard-hitting news and how has your visual display of quantifiable information changed over the years?
Bloomberg has invested heavily in a function that allows users to set up audio alerts on its system. Visually, Bloomberg has had a “classic” look over the past 30 years, however, much has changed underneath.

Do you anticipate another company could use these tools to provide this type of sophisticated information without the high fee?
Merz stated that Blomberg has a culture of continuous innovation that continually strives to improve the service. Bloomberg is reliable and is able to provide a “whole” solution better than any competitor. Merz compared Bloomberg to Apple in that there are many sellers of phones, however Apple is the brand people are willing to pay up for (similar to the Bloomberg service).